Typography rules and terms that every designer must know 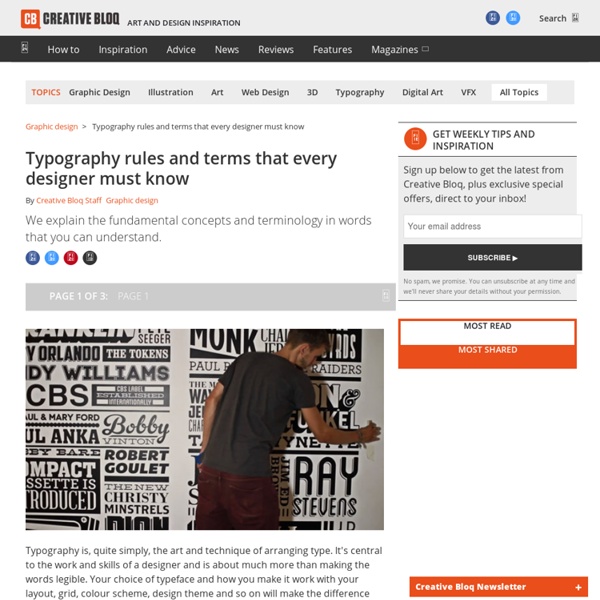 Typography is, quite simply, the art and technique of arranging type. It's central to the work and skills of a designer and is about much more than making the words legible. Your choice of typeface and how you make it work with your layout, grid, colour scheme, design theme and so on will make the difference between a good, bad and great design. There are lots of typography tutorials around to help you master the discipline. But good typography is often down to creative intuition. Once you're comfortable with the basics, visit some typography resources to investigate font families and discover some font pairings that are made for each other. Choosing a font There's an astonishing array of paid-for and free fonts to choose from online. A typeface, like any form of design, is created by craftsmen over a substantial period of time, using the talent and experience they've been honing for many years. 01. All typefaces are not created equally. 02. 03. 04. 05.

Alternatives To Your Favorite Serif Typefaces [Updated With Specimens] Hello, my name is Bram, a brand strategist, hacker and typophile. I’ll be guest blogging for Designer Daily during Mirko’s vacation week. Consider this fact: today, we have more typefaces than ever designed, yet most designers chose to stick with their Helveticas, Gills and Caslons. This isn’t bad, per se; after all, going with the familiar guarantees predictable outcome. But with typography, the subtlest of choice can make a big difference—and sometimes, you want to add just enough character to the type, without making abrupt change.

A Beautifully Illustrated Glossary Of Typographic Terms You Should Know The world of typography often seems like it has its very own language, full of serifs, strokes, and swashes. Sorting out all those terms can be confusing in itself, so we’ve compiled a visual glossary that will guide you through the lingo — whether you’re an aspiring typeface designer or just a general typography enthusiast. Learning the building blocks of typography will help you better understand how to pick a suitable font and apply it effectively within your design projects. The Basics: Typefaces Categories & Styles 01. Font/Typeface: Roman cursive Roman cursive, old and new Old Roman cursive[edit] Old Roman cursive, also called majuscule cursive and capitalis cursive, was the everyday form of handwriting used for writing letters, by merchants writing business accounts, by schoolchildren learning the Latin alphabet, and even by emperors issuing commands. A more formal style of writing was based on Roman square capitals, but cursive was used for quicker, informal writing. It was most commonly used from about the 1st century BC to the 3rd century AD, but it probably existed earlier than that. In the early 2nd century BC, the comedian Plautus, in Pseudolus, makes reference to the illegibility of cursive letters:

The 100 best free fonts This list represents the 100 best free fonts we've found in a variety of styles. We have many other articles covering specialist font types including handwriting fonts, graffiti fonts, web fonts and more, but we have sectioned our main list under these styles: Most of the typeface collections listed here can be used in your projects, but please be sure to check the terms. So What’s the Big Deal with Horizontal & Vertical Bezier Handles Anyway? 17 Apr Have you ever seen Illustrator progress shots from your favourite designers and wondered how and why their bezier handles are so obsessively arranged? We’re hoping to shed a little light on this seemingly unnecessary process. Note: this tutorial assumes a solid grasp of Illustrator & the pen tool.

Ten Awesome Alternative Free Web Fonts Free web fonts such Museo, League Gothic, Droid and Lobster have been around since the dawn of the @font-face revolution. Whilst these are all fantastic typefaces, they are beginning to suffer from over-use. Services such as Google Web Fonts and FontSquirrel are expanding their free @font-face collections weekly but it can be difficult to pick through masses of naff display fonts to find that perfect typeface.

A Crash Course in Typography: The Basics of Type Typography could be considered the most important part of any design. It’s definitely among the most important elements of any design project. And yet it’s often the part of a design that’s left for last, or barely considered at all. Poetry Worksheets Poetry Worksheets Practice This is the poetry worksheets section. Poetry is an art form in which human language is used for its aesthetic qualities in addition to, or instead of, its notional and semantic content.

What is typography? First, we’ll start with the definition: typography is the visual art of creating written words. Before the digital age, typography was a rather specialized craft that was confined to the worlds of book and magazine design and a range of advertising and public works. Road signs, billboards and product packaging are some examples of where typography is used in the physical world. Once the internet became a graphic medium, however, the art of typography exploded in a thousand different directions. Never before in history has the printed word shown up in such abundant visual diversity. Using @font-face The @font-face rule allows custom fonts to be loaded on a webpage. Once added to a stylesheet, the rule instructs the browser to download the font from where it is hosted, then display it as specified in the CSS. Without the rule, our designs are limited to the fonts that are already loaded on a user's computer, which vary depending on the system being used. Here's a nice breakdown of existing system fonts. Deepest Possible Browser Support

15 top typography resources If you are looking for help with fonts or type, these typography resources are for you. The web is a wonderful thing, brimming with resources and tutorials for people wanting to learn about the discipline and see some examples of beautiful and innovative typography to inspire. But, sometimes, too much choice can be confusing, so we've picked some top sites that will really help you get to grips with it. Cell Structure 2. Are there living organisms without cells? Viruses are considered the only living organisms that do not have cells. 10 Infographics That Will Teach You About Typography Typography is a crucial component of great designs involving text, so knowing as much as you can about it is an important step to becoming a great designer. This roundup of infographics will help you discover new and interesting things (as well as reinforce and reiterate stuff you already know) about typography. Click the Go to Source link under each infographic to navigate to the source of the infographic and to see the larger version provided by the creator of the infographic. 1. Bold & Justified: The Huge World of Typography Infographic Did you know that Israel is the source of the most expensive typefaces?

How to Use Adobe Edge Web Fonts on Your Site Adobe recently launched a free web font service to complement Typekit, their amazing premium service. Adobe Edge Web Fonts currently gives you around 500 free font families that you can use on your site today with little effort. How great is that? The process for implementing these fonts isn’t quite as straightforward as some of the other services that you might be used to, so today we’re going to dive in and take a look at how it all works. Meet Edge Web Fonts