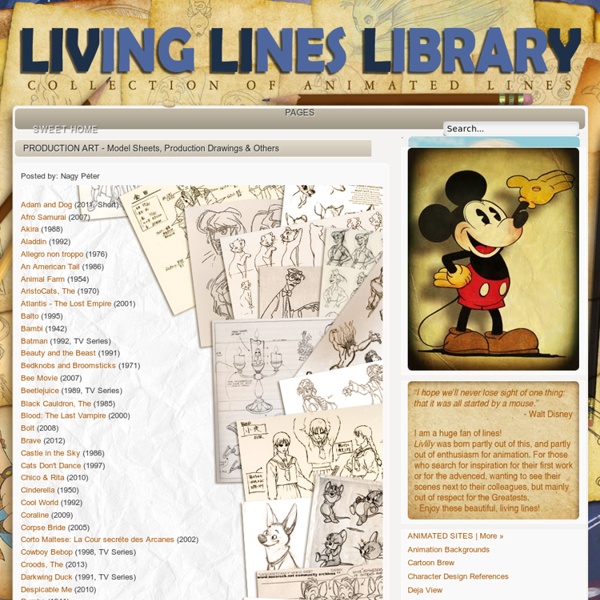 Micehell Ferri on Pinterest Log in Home Categories There’s more to see... Come take a look at what else is here! He used Pinterest to explore new campsites Join Pinterest to find all the things that inspire you. Character Design 2: Primer What makes good character designs for animation? This is a difficult subject. The real answer is a talented character designer who understands character. No amount of abstract ingredients can make an artist into a designer if he doesn't have the gift. You can learn technical skills in art, but some talents are so rare that you just either have them or you don't. Not every great animator is a good designer.

The 60 best free Photoshop brushes Photoshop brushes are a fantastic time-saver as they allow you to quickly create rich artwork without having to draw all the individual design elements. There's a huge spectrum of brushes available ranging from leaf designs to fabric textures, cloud patterns to typography. While Photoshop CC does ship with a set of brushes pre-installed, they only scratch the surface of what's possible with the brush engine. So whether you're using CS3 or have joined the Creative Cloud, grab the free downloads below and start adding amazing design flourishes to your work now! As well as browsing through the whole list, you can jump right to the section you need right now using this handy menu! 01. SimplicityCam 5e The Recordex Simplicity 5e HD Doc Cam sets a new standard in compact shooting performance. Weighing in at just 2.25 pounds and constructed of aluminum alloy the SimplicityCam 5e shoots images and video in stunning HD quality. 5MP HD Camera.

Wizards of the Coast artist paints a woman warrior the Applibot way Demon stopper Oliveira is a character created for the mobile card game Legend of the Cryptids, developed by the Japanese publisher Applibot. She is the warrior who prevents demons and monsters coming up to the surface of Earth. In her backstory, Oliveira spent time in Hell and was rescued by a sacred warrior who also taught her how to fight. In this painting I'm depicting a scene where she is receiving the magic katars from her master.

Make manga with a touch of realism in 5 easy steps Painting a realistic manga character isn't easy because the volumes aren't logical. For example, the eyes are totally flat. The best approach is to cheat and use more human-like shapes. Try to find good references such as vinyl figures or dolls, but bear in mind that it doesn't have to be exclusively plastic in nature. Think about your light sources first, which will help you find your palette and define your volumes.

The Cinematography of "The Incredibles" Part 3 See Part 1 here, and Part 2 here.Continuing with my case study of the shot compositions from Pixar's film "The Incredibles". All images used here are ©Disney/Pixar (unless otherwise stated). Cinematography is the art of composing the scenes of the film so they can visually tell the story in a functional and creative way. The purpose of composition is to direct the viewer's eye to the central point or "story" in your scene. Regardless of the particular subject, composition of the frame is important. The Incredibles has accomplished an appealing, efficient and artistic way of shooting all the sequences of the film to truly place the audience inside this world, and thus allow the viewers to get lost in the story.

Comments Advice for a New Illustrator Illustration is a very diverse and scattered profession, a practice that takes many forms, sometimes even hard to define, and it’s very unlikely that the careers of any two illustrators are alike. It’s mostly freelance work where an illustrator moves from one opportunity to the next, often in an unpredictable way week to week and certainly unpredictable throughout a working lifetime. If nothing else, markets, technology, culture, personal skills and interests will change and develop all the time. That’s the first thing to be aware of, especially when either giving or receiving specific advice – every artist’s experience and circumstance is different.

Cinemagraphs Archives Page 3 of 33 Ann Street Studio Shooting the former editor of Vogue Paris, Carine Roitfeld, for her newest endeavour CR Fashion Book as she looks out over Manhattan, almost as if she is looking forward to taking over this city as she has done to Paris. In addition to being one of the most influential fashion editors, creating iconic imagery that defines who we are in life and where we are going, she is also glamorous and French and beautiful. When starting CR Fashion Book, she said: I will always be irreverent in my own way, but I will try to use new approaches…I will try to do something totally different now, because I don’t want to get bored of myself or to bore my readers. So, if I learn something new today, I will use it.

Shading a Gem Hello and Welcome to the tip tutorial on Shading a Gem. In this tutorial we go through the steps on shading a gem to show how easy a material such as this can be to create! This can be done with any color that matches the gem’s properties but for this, we are using an amber/honey color. The steps would be similar when using other colors, just remember to bend your colors toward the light. Want some more help looking at color? Check out the getting started section on Color Basics.