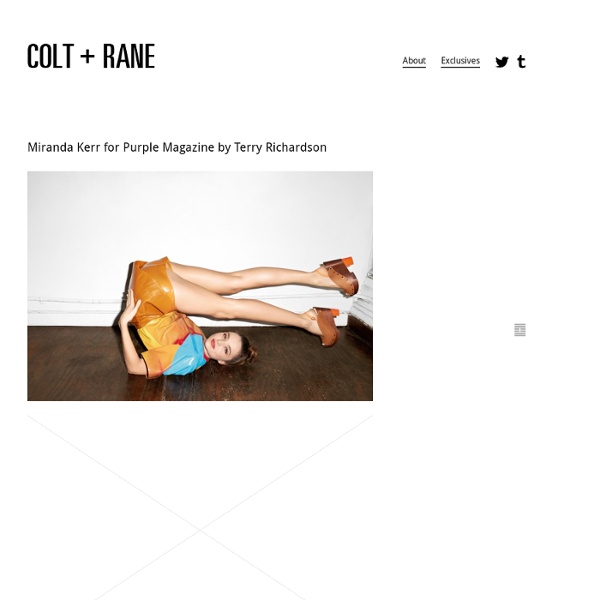 Painting Intoxicated at 100 MPH (10 pieces) It's almost as if Alexandra Pacula paints what she sees while driving drunk at 100 mph. "My work investigates a world of visual intoxication; it captures moments of enchantment, which are associated with urban nightlife," says the New York-based artist born in Poland. "I am fascinated by the ambiance of the city at night and its seductive qualities. colectiva A wait for ever We truly hope you can find a place in your heart for forgiveness as we feel quite bad that we haven’t posted anything during the last days, and we’d like to apologize. Unfortunately we’ve been dealing with hosting problems, lack of time, stress, and preparation for a couple of kick-ass activities of which we’ll be writing about during the next couple weeks. Meanwhile, enjoy this animated gif by Rene Abythe conveniently titled A Wait for Ever. via: computers club

Brewing Tea Tea Plant All true tea comes from the camellia sinensis plant. The final product falls into one of three categories, depending on how long the tea is allowed to ferment: green tea, oolong tea, and black tea. Black Tea Black Tea is dried on special withering racks. Then, they're rolled, left to ferment in special temperature and humidity controlled rooms for two to four hours, and finally allowed to dry. Varieties such as darjeeling or assam are named for the areas in which they are grown (like wine). Sweet Station Zemer Peled Peled was born and raised in a Kibbutz in the northern part of Israel. After completing a BA (Hons) at the Bezalel Academy of Art and Design in Jerusalem she graduated with an MA (Hons) from the Royal College of Art.

Best Inventions of 2009 vIndianz.com (20 Jan , 2009) — Time Magazine, the reputed magazine, has once again posted its annual list of the 50 best inventions of the year. The list includes everything from NASA’s new rocket to that “bladeless” fan to $10M light bulb. Some of the other amazing products on the list are below: The Best Invention of the Year: NASA’s Ares Rockets Poetry, Essays, Reviews, Art - Page 3 Yesterday I reported on a particular poetry performance and discussion event coming up in Chicago on September 15, 2012. A recap: The Changing Light at Sandover, by James Merrill, Reading and Discussion With: Richard Fox, Barrie Cole, Jeff Abell & Robert McDonald When: Saturday, September 15, 2012, from 7:00 p.m. until 11:45 p.m. Where: 1922 […] Read More It’s always fascinating to find out what our Escape Into Life poets are doing.

CREATE * INSPIRE * COMMUNITY * ART * DESIGN * MUSIC * FILM * PHOTO * PROJECTS Heads up for any illustrators and designers out there! Skillshare is currently offering a special deal for Booooooom readers! 3 months of Skillshare Premium for $1. Sweet Station Josh Bronaugh Joshua Bronaugh is an artist that is originally from many places – he spent some years in Germany, before skipping through American mountains, forests, and salt flats, landing eventually in the south. His paintings, often large in scale, focus the obsessions of memory and emotion, almost always pushing the human figure to the edges of representation and, in some instances, far into abstraction. ( via LeQuire Gallery )