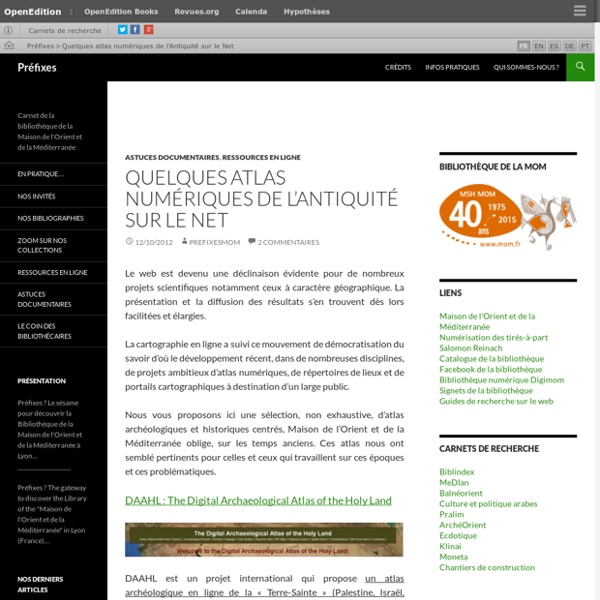 Ancient World Mapping Center The center supports a variety of ongoing projects including: Current Projects: Antiquity À-la-carte The Antiquity À-la-carte application is an interactive digital map of the ancient world built using open source software and data derived from The Barrington Atlas of the Greek and Roman World and Pleiades. AWMC: Strabo Map x The Strabo Application is a georeferenced, interactive digital map of the Ancient Mediterranean World to accompany the text of the Geography translated by Duane W. Roller and published by Cambridge University Press (2014).

An Interactive Map of Odysseus' 10-Year Journey in Homer's Odyssey The Odyssey, one of Homer’s two great epics, narrates Odysseus’ long, strange trip home after the Trojan war. During their ten-year journey, Odysseus and his men had to overcome divine and natural forces, from battering storms and winds to difficult encounters with the Cyclops Polyphemus, the cannibalistic Laestrygones, the witch-goddess Circe and the rest. And they took a most circuitous route, bouncing all over the Mediterranean, moving first down to Crete and Tunisia. Next over to Sicily, then off toward Spain, and back to Greece again. If you’re looking for an easy way to visualize all of the twists and turns in The Odyssey, then we’d recommend spending some time with the interactive map created by Gisèle Mounzer.

awmc - ancient world mapping center Keeping abreast of the ever-expanding set of resources relevant to the geography and mapping of the ancient world is a Herculean task and this page does not attempt to do that, rather it aims to provide a basic set of initial references for the community. AWMC is always happy to consult with scholars and community members seeking to find certain, specialized resources. Print Resources Compendia herodotus timemap Book 1, Ch. 1 This is the display of the inquiry of Herodotus of Halicarnassus, so that things done by man not be forgotten in time, and that great and marvelous deeds, some displayed by the Hellenes, some by the barbarians, not lose their glory, including among others what was the cause of their waging war on each other.The Persian learned men say that the Phoenicians were the cause of the dispute. These (they say) came to our seas from the sea which is called Red, and having settled in the country which they still occupy, at once began to make long voyages.

Catégorie: Cartes de l'Empire romain Cancel Edit Delete Preview revert Text of the note (may include Wiki markup) Could not save your note (edit conflict or other problem). Please copy the text in the edit box below and insert it manually by editing this page. Upon submitting the note will be published multi-licensed under the terms of the CC-BY-SA-3.0 license and of the GFDL, versions 1.2, 1.3, or any later version.

40 maps that explain the Roman Empire by Timothy B. Lee on August 19, 2014 Two thousand years ago, on August 19, 14 AD, Caesar Augustus died. He was Rome's first emperor, having won a civil war more than 40 years earlier that transformed the dysfunctional Roman Republic into an empire. Under Augustus and his successors, the empire experienced 200 years of relative peace and prosperity. Here are 40 maps that explain the Roman Empire — its rise and fall, its culture and economy, and how it laid the foundations of the modern world. carta impero To magnify the 12 segments (Tabulae) click on them. The first segment (not original, but reconstructed in 1916 by Conradus Miller) starts with the Straits of Gibrtitlear and finishes at the end of the 12th segment with the Chinese frontier (Sera Maior). The oceans, seas, lakes, rivers and extreme frontiers are stylised with a dark green colour. The mountain ranges are shown as humps on the map whilst the great forests are shown by little trees.

tabula peutingeriana Tabula Peutingeriana (section)—top to bottom: Dalmatian coast, Adriatic Sea, southern Italy, Sicily, African Mediterranean coast The Tabula Peutingeriana (Peutinger table, Peutinger Map) is an illustrated itinerarium (in effect, a road map) showing the cursus publicus, the road network in the Roman Empire. The original map (of which this is a unique copy) was last revised in the fourth or early fifth century.[1] It covers Europe, North Africa and parts of Asia (the Middle East, Persia, India). The map is named after Konrad Peutinger, a German 15–16th-century humanist and antiquarian.

history and geography of europe: euratlas.net Historical Maps Euratlas Periodis Historical Atlas of Europe History of Europe A sequence of 21 maps showing the European states as they were at the end of each century from 1 to 2000. Aegean Area History