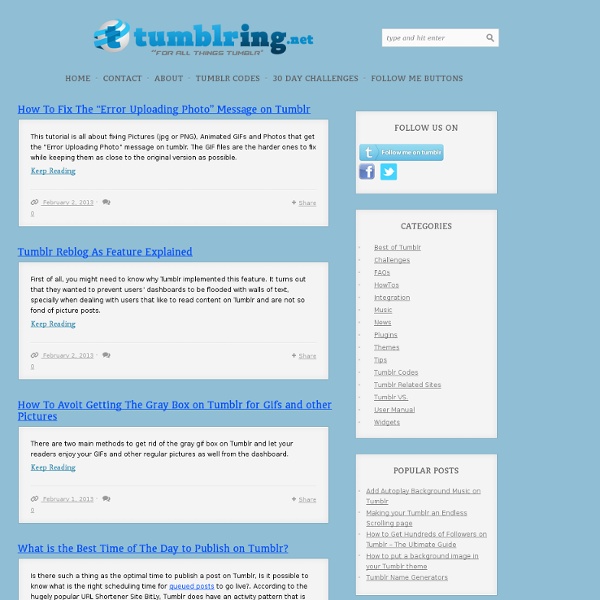 Free Online Image Editor Vertex42 - Excel Templates, Calendars, Calculators and Spreadsheets How to jailbreak your iPad and start multitasking immediately Apple’s iOS 4 enables multitasking and other new and useful features, but the iPad can’t join the party until this fall. If you jailbreak your iPad, however, you can multitask today–and that’s just the beginning. Your jailbroken iPad can run all kinds of third-party apps far beyond the selection in Apple’s App Store. Want to sync over Wi-Fi, connect a Bluetooth GPS or mouse, and browse the entire iPad file structure? Jailbreaking your iPad lets you install third-party utilities and applications. When jailbroken, the iPad becomes an actual computer in that you can tweak the interface and make modifications at the lowest levels. Related stories Get iPad to run Windows 7, Microsoft Office with Citrix Receiver Mixed response marks iPad launch in Canada iPad will rewrite Canadian wireless pricing – cheap AT&T-like rates must come here, too How to Jailbreak Your iPad As with all major installations, begin with a backup. Download Spirit to jailbreak the iPad. Add Multitasking Sync Over Wi-Fi

Download :: DupKiller Official Web-Site From this page you can download the latest and previous versions of DupKiller, additional language files, and also can read about made changes. DupKiller The current archived alpha-version of DupKiller (work in progress) can be downloaded here (size: 1.67 MB). To install it you need to install the latest version and unpack the contents of the archive into the DupKiller folder. Additional Language Files To install additional language files, you need to copy the downloaded language file to DupKiller folder (for example, C:\Program Files\DupKiller). Plugins Downloaded plugins (DLL) must be copied to a subfolder of DupKiller plugin folder (for example, C:\Program Files\DupKiller\Plugins\YourPluginName\your_plugin_name.dll). History

Standard diagnostic - Firefox From MozillaZine Knowledge Base This article provides a more or less complete set of steps to identify and correct most known causes of Firefox no longer working properly. The solutions offered will preserve your user profile data (bookmarks, passwords, history, preference settings, etc.) as far as possible. You should first search the Knowledge Base and check the links given at the end of this article for a solution to your specific problem. Important: The Firefox configuration, bookmarks and other personal data, and information on themes and extensions are stored in your profile. Standard diagnostic steps Note: Many "Firefox" problems are caused by incompatible themes, extensions, or programming errors in plugins. Exit Firefox completely and reboot the computer. If the issue is still unresolved, see the other solutions listed below. Extension issues Extension problems may arise after a Firefox update, not just after installing a new extension. Profile issues Plugin issues Clean reinstall

Firefox on Steroids.Tweaks to Double The speed of Firefox | Know UR Ledge Firefox on Steroids.Tweaks to Double The speed of Firefox Firefox is in my opinion one of the best browser ever made until now. It includes: -improved tabbed browsing -pop up blocking -integrated Goggle search -enhanced privacy controls -built-in phishing protection -online spell checking -lots of themes, interfaces, and extensions/addons Mozilla Firefox officially supports: -Microsoft Windows -Linux -Mac OS X Unofficial Support: -Free BSD -OS/2 -Solaris -SkyOS -BeOS -XP Professional x64 Edition Now here are some Tips&Tricks that can help you double the speed of Firefox. FOR FIREFOX 3 And Above 1. 2. 3. 4. 5.IPv6 In IPv6-capable DNS servers, an IPv4 address may be returned when an IPv6 address is requested. 6. 7. 8. 9. 10. 11. 12.

The Best Backup Software OB Roundup Hard drives fail. Files become corrupted. Viruses hit. Local file-and-folder backup programs create copies on local drives or media, disk imaging software creates a snapshot of your entire drive, and online backup services automate uploading your data to secure off-site storage. The file-and-folder backup apps collected here protect only the files and folders that you specify, and typically give you the option of preserving one or more older versions every time it backs up the latest set of updated files. A drive-imaging program, by contrast, makes a complete backup of your entire hard drive or of one or more partitions. How Backup Apps WorkThe best file-and-folder backup programs work quietly in the background, making copies of your files either on a regular schedule or whenever a new version of a file is saved to disk. All file-and-folder backup programs let you select any folder or a set of folders as a backup source. Folder and File Backup Software Genie Backup Manager

The Best Book For HTML & CSS Beginners Duckett is great. It's easy to find books for free nowadays. It's important to support good authors so they can keep doing good work, so I totally respect you for doing that. When Windows Update Fails, This Is How You Fix It The recent Windows 8.1 August Update blindsided many users with issues. Some experienced BSODs or black screens, while others found themselves stuck in an infinite reboot loop. If you’ve been negatively affected by a Windows Update, here’s a quick list of troubleshooting steps that will help you restore Windows to a functional state. Windows Crashes With A Blue Screen Of Death A BSOD typically hints to a hardware problem or faulty drivers, but can also be caused by third-party software. We have previously shown you how to troubleshoot a BSOD in Windows 8. The August Update BSOD After applying the Windows August Update, many Windows 7 and 8 users experienced BSOD crashes with a 0x50 Stop error message. According to Microsoft, August Update BSOD crashes are caused by the following updates, which subsequently have been disabled: How To Fix It A workaround proposed by Microsoft Community member rvuerinckx recommends to boot from a recovery disk and remove the following file: Hide Windows Updates

34 Online Backup Services Reviewed (January 2016) 9. Livedrive Review Livedrive is an online backup service that offers an interesting mix of backup plans, a cost effective way to add computers, and a really nice computer and mobile app interface. Livedrive "Backup" and "Pro Suite" are the two backup plans you can purchase. Livedrive "Backup" runs $8.00 /month, and "Pro Suite" is $25 /month. All Livedrive online backup plans offer significant discounts if you prepay for one year. Another plan offered by Livedrive is called "Briefcase," and is just an online storage plan that offers 2 TB of space - it doesn't back up your files like a regular backup plan. If you purchase the "Pro Suite" plan, you get 5 TB of the "Briefcase" plan included, plus its added features. "Military grade" AES-256 encryption, an excellent interface, and competitive pricing makes any of the Livedrive plans a good choice.