A Neuroscientist Uncovers A Dark Secret 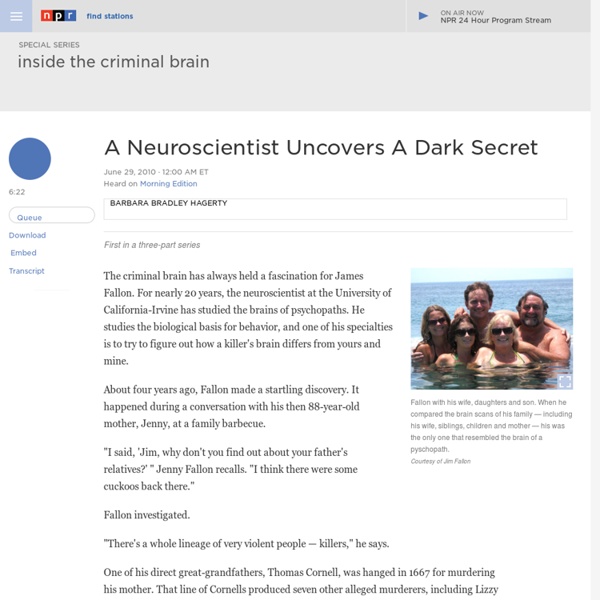 Somatic markers hypothesis The somatic marker hypothesis (SMH) proposes a mechanism by which emotional processes can guide (or bias) behavior, particularly decision-making.[1][2] This hypothesis has been formulated by Antonio Damasio. Hypothesis[edit] When individuals make decisions, they must assess the incentive value of the choices available to them, using cognitive and emotional processes. When the individuals face complex and conflicting choices, they may be unable to decide using only cognitive processes, which may become overloaded. The amygdala and VMPFC are essential components of this hypothesized mechanism and therefore damage to either structure will disrupt their proposed action in mediating the development and action of somatic markers. Research background[edit] Patients with frontal lobe damage (e.g., Phineas Gage) provided the first evidence that the frontal lobes were associated with decision-making and social conduct. Working mechanism[edit] Evolutionary evidence[edit] Experiments[edit]

How to increase serotonin in the human brain without drugs Sexual orientation – wired that way In a recent post, I presented the evidence that sexual preference is strongly influenced by genetic variation. Here, I discuss the neurobiological evidence that shows that the brains of homosexual men and women are wired differently from those of their heterosexual counterparts. First, we must consider the differences between the brains of heterosexual males and females. These differences are extensive and arise mainly due to the influence of testosterone during a critical period of early development (see Wired for Sex). They include, not surprisingly, differences in the number of neurons in specific regions of the brain involved in reproductive or sexual behaviours as well as differences in the number of nerve fibres connecting these areas. But they also involve areas not dedicated to these types of behaviours, such as the cerebellum, for example, which is involved in motor control among other things, and which shows a very large difference between men and women. Swaab DF (2008).

Brain Explorer The Science of Memory: An Infinite Loop in the Brain - SPIEGEL O "No one can imagine what it's really like," says Jill Price, 42, "not even the scientists who are studying me." The Californian, who has an almost perfect memory, is trying to describe how it feels. She starts with a small demonstration of her ability. "When were you born?" she asks. She hears the date and says: "Oh, that was a Wednesday. Price is sitting in The Grill, a restaurant in Beverly Hills. She says the restaurant has been one her favorites for the past 23 years -- since Sept. 20, 1985, to be exact. On this Wednesday she orders a whitefish filet with creamed spinach and a soda, yet another immaterial detail she will now remember forever. Price can rattle off, without hesitation, what she saw and heard on almost any given date. She can also date events that were reported in the media, provided she heard about them at the time. "People say to me: Oh, how fascinating, it must be a treat to have a perfect memory," she says. Can someone who cannot forget even fall in love?

How the Brain Stops Time One of the strangest side-effects of intense fear is time dilation, the apparent slowing-down of time. It's a common trope in movies and TV shows, like the memorable scene from The Matrix in which time slows down so dramatically that bullets fired at the hero seem to move at a walking pace. In real life, our perceptions aren't keyed up quite that dramatically, but survivors of life-and-death situations often report that things seem to take longer to happen, objects fall more slowly, and they're capable of complex thoughts in what would normally be the blink of an eye. Now a research team from Israel reports that not only does time slow down, but that it slows down more for some than for others. An intriguing result, and one that raises a more fundamental question: how, exactly, does the brain carry out this remarkable feat? Researcher David Eagleman has tackled his very issue in a very clever way . Was it scary enough to generate a sense of time dilation?

Music, Mind, and Meaning This is a revised version of AI Memo No. 616, MIT Artificial Intelligence Laboratory. An earlier published version appeared in Music, Mind, and Brain: The Neuropsychology of Music (Manfred Clynes, ed.) Plenum, New York, 1981 Why Do We Like Music? Why do we like music? Have we the tools for such work? Certainly we know a bit about the obvious processes of reason–the ways we organize and represent ideas we get. The old distinctions among emotion, reason, and aesthetics are like the earth, air, and fire of an ancient alchemy. Much of what we now know of the mind emerged in this century from other subjects once considered just as personal and inaccessible but which were explored, for example, by Freud in his work on adults' dreams and jokes, and by Piaget in his work on children's thought and play. Why do we like music? I feel that music theory has gotten stuck by trying too long to find universals. Sonata as Teaching Machine Compare a sonata to a teacher. Cadence. What Use Is Music?

15 Things You Probably Didn’t Know About the Brain Did you know that the belief that people only use 10% of their brains is a myth? Or that a brain has 100,000 miles worth of blood vessels, and over 100 billion neurons? Hit the jump for other interesting facts about the the organ that makes us, human beings, so special.