The Best of British - The American's guide to speaking British... 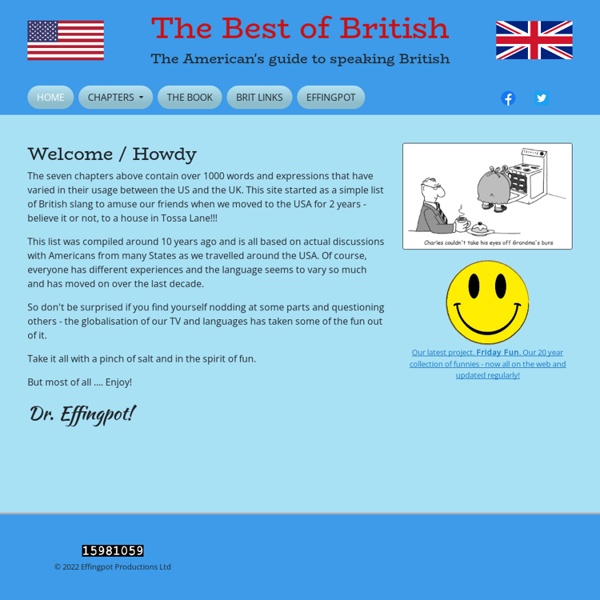 Complete list of Facebook Chat Emoticons | calebbrown.id.au While playing with Facebook Chat I wondered if it supported emoticons. Turns out it does. But when I tried the >:-) emoticon (a 'devil') and saw it printed as boring text, I wondered, "what smilies does facebook actually support?" So with the help of Safari and some javascript hacking I present to you a complete list of facebook emoticons. smile frown tongue :-P :P :-p :p =P grin gasp :-O :O :-o :o wink glasses sunglasses grumpy unsure cry devil angel kiss heart kiki squint confused o.O O.o upset >:O >:-O >:o >:-o pacman :v curly lips robot Chris Putnam :putnam: Shark Penguin Thumb (Y) (y) Some Facebook users have created their own emoticons for Facebook chat. Here is a collection of some emoticons that are created using user profile images. Rock Sign [[roxsign]] Middle Finger [[midfing]] Enjoy. Updated 21 July 2008: Moved B-) and B) from sunglasses to glasses and cleaned up formatting.

Harry Potter 7.1: The Drinking Game | FM Though it may be hard to believe, it’s already been nine years since Potter-heads around the world were introduced to the silver-screen personalities of Harry, Ron, and Hermione in the movie “Harry Potter and the Sorcerer’s Stone.” Maybe it seems kind of creepy that we’ve been watching them grow up right before our eyes (oh hey, Emma Watson), but we’ve been growing up right alongside them, and now it’s time to celebrate the bittersweet—but still triumphant —beginning-of-the-end. FM thought of no better way to celebrate than to grab our friends and a mug of our favorite wizarding libation (toss-up butterbeer or firewhiskey) and get in touch with our inner spell-caster as we watched “The Deathly Hallows: Part 1.” —Whenever somebody casts a spell, take a sip (take a gulp if Hermione casts it). —If you hear the full name “Harry Potter,” take a sip (two if the person saying “Harry Potter” sounds particularly surprised or confounded). —If somebody casts “Avada Kedavra,” kill your drink.

Coolest Events Around The World Here are the most bizarre/amazing events around the the world that you are missing out on every year by not exploring. This is motivation for you to go out and see what else is out in the world! (I apologize in advance for making your local concerts and street fairs look like petting zoos) Bunyol, Spain — August 26th – 11am Every year 30,000 people assemble in the streets of Bunyol, Spain to participate in the largest tomato fight in the world. 125,000 kg of tomatoes are brought into the city via truck so ammunition is never short. 5 massive tomato-packed rockets are exploded in the air to commence the fight. 1) You must squish each tomato before throwing it so that the force of the vegetable against you target’s head will not cause injury 2) Only tomatoes can be thrown ‘Black Rock City’, Nevada, USA — September 3rd-5th The official site for Burning Man describes the event as “a city in the desert dedicated to radical self reliance, radical self-expression and art.” Thailand — April 13-15

Winners and Losers from Roller Coasters (62 Pics) Today we present you Roller Coaster picdump.. Moments when people make the most weird faces without knowing how they look. The Webtender: Drinking Games. Have fun with The Webtender's collection of drinking games, but be extremely careful if you play any these games, especially the ones with high buzz factors. The collection was created as an aid to responsible adults who know their limits (and not to cross them) when it comes to drinking, and not to promote this kind of drinking behavior. You should of course be of legal drinking age if you want to play these games with beer or drinks, but anyone can play these games with non-alcoholic beverages as well. For more fun, visit the Web Site Index and go to one of the sites listed there. You should also take a look at 'The Complete Book of Beer Drinking Games'. Home · Drink Recipes · Forums · Bookstore · Barstore · Web Index · Feedback

Kongregate: Play free games online Bel-Air (Fresh Prince) About To Bel-Air, when used as a verb, means to copy a story that another Inter user has posted online and switch out the last half of the story with the lyrics to opening theme song of “The Fresh Prince of Bel-Air,” an American sitcom series starring Will Smith as a street-smart teenager from West Philadelphia who lives with his relatives in Bel Air. On 4chan, the lyrics of opening theme song is used as a popular “bait and switch” copypasta. Origin The Fresh Prince of Bel-Air is an American sitcom series starring Will Smith as a fictionalized version of himself, a teenager from West Philadelphia who is sent to move in with relatives in affluent Bel Air area. According to several references including Oh Internet, the Bel-Air copypasta originated on 4chan circa 2004 when someone on /b/ (random) board started telling a serious story but then halfway through, suddenly derailed into the lyrics of the show’s opening theme song. Lyrics Spread Usage Notable Examples Cyanide Bel-Air Sex Bel-Air

Schrute Facts fourtoe: Woo! So x atheist x!!!I have been barefoot 99% of my life now that I am no longer in school.Also, is it bad to have my plate number on the internet like this? I bought another FSM emblem for my car. iraffiruse: That’s better…frozach submitted It was 2015 folk, all the times were divisible by 5, 1955, 1985 and 2015. Not Schrute Facts related but fuck you. The left (I think the left) is Rick Frothy Anal Juice, also known as Rick Santorum. Again, I stole this from someone more brilliant than I. We also broke 300 followers! Submitted by viking-god. I start school again next week and so most likely in an effort to not do school work, I will update this tumblr. I think I like this one…seriously though kids, you should ALWAYS have a “false” starting the second line. I think this one is stretching a bit. The old Schrute Facts blog guy posted some more Schrute Facts.

Spock Is Not Impressed Spock is not impressed with your wave flagging Boris…. 11 Stupid Legal Warnings" This is going to blow your mind, so steady yourself: A carton of eggs could potentially have eggs in it. Yes. Now you know the shocking truth. It's OK, we'll give you a minute to let it sink in ... The exact wording of this flabbergasting pronouncement on a carton of eggs is: "This product may contain eggs." That's by far not the only wacky warning out there. America's lawsuit-obsessed society has forced product manufacturers to cover their you-know-whats by writing warning labels to protect us from ourselves.