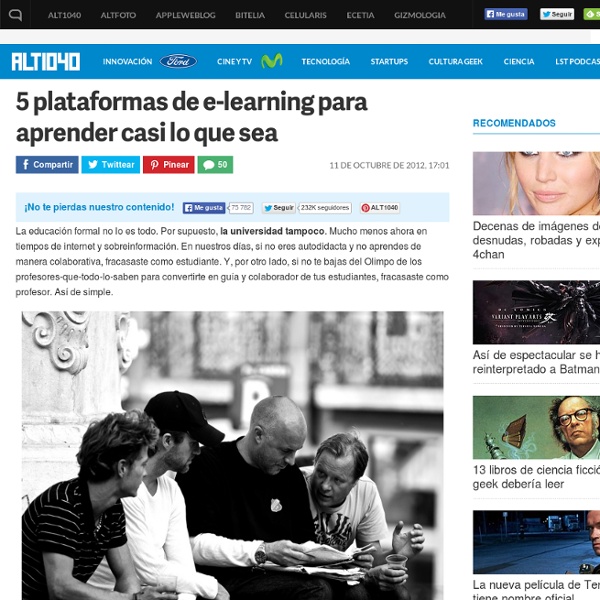 How a Radical New Teaching Method Could Unleash a Generation of Geniuses You can read a version of this story in Spanish here. Pueden leer una versión de esta historia en español aquí. José Urbina López Primary School sits next to a dump just across the US border in Mexico. The school serves residents of Matamoros, a dusty, sunbaked city of 489,000 that is a flash point in the war on drugs. There are regular shoot-outs, and it’s not uncommon for locals to find bodies scattered in the street in the morning. To get to the school, students walk along a white dirt road that parallels a fetid canal.

Most Popular Drinks Every Bartender Should Know Tip from BarWhiz: Also check out our Periodic Table of Alcohol which gives great information about popular drinks Besides being able to pour a proper pint, every bartender should have a solid backing knowledge of the most popular drinks. Not every patron knows what they want to order and those that do know want it made the way it is supposed to be. Of course there are hundreds of drinks a bartender SHOULD know, but we’ve decided to go with the classics. Here’s a quick rundown of the most popular drinks every bartender should know.

BlogLESS: A Blog about Design Ethics Misunderstanding Focus This week: surprising portraits from Nerhol. Written by Paul on April 20, 2012 “Misunderstanding Focus” is series of photo collages made by Nerhol, a collaboration between Ryuta Iida and Yoshihisa Tanaka. Each artwork is made of a several photos which were taken in a 3 minutes time span and then layered like an onion. Via! How to Reset Your Forgotten Windows Password the Easy Way Forgetting your password is never any fun, but luckily there’s a really easy way to reset the password. All you need is a copy of the Windows installation disk and one simple command line trick. Note: If you are using Windows 10 and a Microsoft account, you’ll need to reset your password a different way. The problem is that with Microsoft accounts, your password actually has to be reset on their servers instead of only locally. Resetting Your Forgotten Windows Password Boot off the Windows disk and select the “Repair your computer” option from the lower left-hand corner.

Nikon Officially Unleashes the Df: F-Series SLR Styling with D4 Power Inside The time has finally arrived to do away with terms like “rumored,” “soon-to-be-announced” and “expected” and replace them with the term “official” where the Nikon Df is concerned. After leaks so severe earlier today that they left nothing to the imagination, Nikon has finally unveiled its retro-styled full-frame ‘Pure Photography’ machine. For those looking for a one sentence description of the Df, one is actually pretty easy to come by: a lightweight F-Series-inspired DSLR that packs the power of the D4′s sensor and processor inside a body with the same level of weather sealing as the D800.

How to Job Hunt While Still Employed It obviously makes more sense to look for a job while you still have one. After all, you won’t feel the pressure to pick any old job that you’re offered because you have to pay your mortgage, car loan, credit card bills or because the gap between jobs on your resume is growing wider and wider. That said, job hunting while you’re still working can present its own set of prickly problems. Here’s how to safely look for a new job — without risking the one you currently have. Don’t be obvious.

The Batman Comics Sequence Do You Think Best Sums Up the Dark Knight SExpand The Vin Almendola, Sal Almendola, Steve Englehart and Dick Giordano (from a Neal Adams idea) classic, "Night of the Stalker" from the 70's (yes, there was Batman before Frank Miller, kids). After ruthlessly tracking down criminals who murdered a young boys parents in front of him, Batman returns to Wayne Manor, looks a portrait of his parents and breaks down in tears.

Product Review: Leica M Monochrom from Adorama Learning Center Is there an audience for an $8,000 camera that only shoots in black-and-white? Mason Resnick got his hands on one of the first Leica M Monochrom cameras to land in the US. Here's his review of this fascinating, unique camera. Leica M Monochrom Key Features: