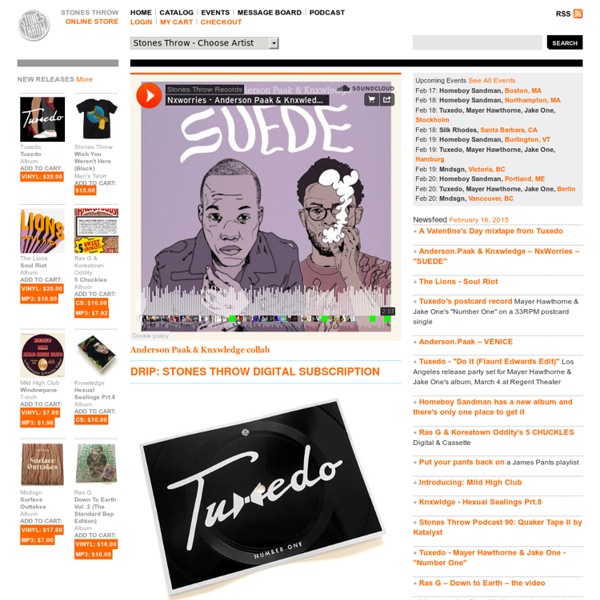 atlasobscura While the rest of the country was forced to go dry, underneath Downtown Los Angeles the party never stopped. Despite prohibition laws, 11 miles of service tunnels became passageways to basement speakeasies with innocuous fronts above ground. Patrons were able to move about under the city, boozing it up without a care in the world, while the Mayor's office ran the supply of hootch. King Eddy Saloon, an establishment that has been alive and kicking on 5th and Main since the 1900s, hid in plain sight fronting as a piano store. Luckily, local officials took no issue with King Eddy's sudden interest in music, and the business not only survived, but prospered. Billionaire Boys Club Blog Our apologies for not updating the blog; we’ve been caught up with the latest BBCICECREAM releases. We know this is late, but better late than never! SpongeBob SquarePants threw Pharrell a 41st Birthday celebration at Cipriani’s on Wall Street. The space was transformed into Bikini Bottom and featured special guests such as SpongeBob, Patrick, Squidward, and Celebrity friends.

Records Dwellings & Druss is now re-open for pre-order on a second press. We dont do second pressings but in this case the record flew so quick that a lot of people were left flat footed & empty handed. It will be on a different colour vinyl and expected shipping is the beginning of April. Black hole glitch - Smashpedia, the Super Smash Bros. wiki. The black hole glitch is a glitch in Melee that causes several of Peach's turnips to become stuck in a small area. If a character touches the concentrated turnips, they will receive massive damage in seconds. The glitch was discovered by Aftermath and Juce in late 2004. There are several ways to perform the glitch. This glitch does not work in Brawl for several reasons, the main reason being the inability to perform the Infinite Super Scope Glitch. How to perform the glitch

Ocora Ocora is a French label dedicated to traditional forms of music with a worldwide coverage. Ocora has published more than 600 records for scientific purposes and also for the general audience on vinyl, cassette and compact-disc. Formerly known as "Société de radiodiffusion de la France d’outre-mer", SORAFOM was founded in 1955 by Pierre Schaeffer as a cooperation venture to train radio engineers in African national broadcasting services, and also to record and preserve African rural soundscapes. SORAFOM became "Office de coopération radiophonique" (OCORA) on April the 14th of 1962, as part of Radio France to collect and preserve traditional music heritage. Ocora was initially run by composer and musicologist Charles Duvelle. Label code: LC 11719 More Less

The latest news and emerging trends in music Mass Appeal Records' Fashawn tells us about his new album, working with Nas, and lists his favorite skaters. The ad has become a viral sensation. According to Brockhampton: "We chose to go against the grain for the sake of keeping our dreams alive." Producer Reggie Volume is making a name for himself with tracks for Wale and Fabolous. Hip-hop is a competitive sport, and our new Rap Power Rankings is all about who’s number one right now.

POPEYE Fashion magazine for young urban men First published in 1976, POPEYE is kind of a fashion catalogue for young urban men, especially high-school and university students. About a fourth of its readers are 16-17 years old. Sound Signature <div class="alert_message warning"><div class="set_to_page_width"><i class="icon icon-exclamation-triangle icon-large"></i><strong>Please enable Javascript to take full advantage of our site features.</strong></div></div> Sound Signature Music News / Page 805 / Silent Uproar Tom Morello and Serj Tankian take time away from their day jobs (guitarist for Audioslave and singer for System of a Down if you've been living in a bunker) to tape a radio show at Burbank, California's KPFK as an extension of Axis of Justice, the social justice organization that Morello and Tankian founded. You can hear it in LA on KPFX on the third Friday of every month, as well as nationally on XM Live radio and archived on both the KPFK and Axis of Justice Web sites. Read more about the playlists and whatnot here. Jan 21 2004 After they finish their acoustic tour, Rilo Kiley will be putting the finishing touches on their new album, the follow-up to The Execution of All Things, for a May/June release. Super Furry Animals are on the road again, this time taking Papa M along.