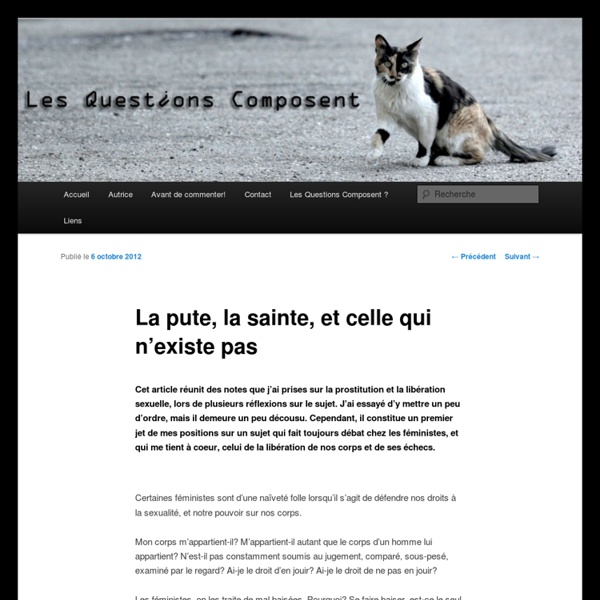 How Frightened Patriarchal Men Have Tried to Repress Women's Sexuality Through History May 29, 2012 | Like this article? Join our email list: <i>On female body experience: "Throwing like a girl" and other essays</i> In lieu of an abstract, here is a brief excerpt of the content: Although women have made great strides, Iris Marion Young maintains that "the image of the woman has not ceased being that of the Other" (3). Women's actions and opportunities continue to be constrained by sex- and gender-specific roles and too often, women's voices are rendered inaudible. PIV is always rape, ok? Just to recall a basic fact: Intercourse/PIV is always rape, plain and simple. This is a developed recap from what I’ve been saying in various comments here and there in the last two years or so. as a radfem I’ve always said PIV is rape and I remember being disappointed to discover that so few radical feminists stated it clearly. How can you possibly see it otherwise?

The G-Spot And 'Vaginal Orgasm' Are Myths, According To New Clinical Review The struggle to find the G-spot and achieve the mythical "vaginal orgasm" is real. Books have been written on it; sex therapists have explained how to stimulate it; even Cosmopolitan magazine has tried to instruct dutiful readers how to find it. But a review published this week in the journal Clinical Anatomy may just halt all of these fruitless quests with the conclusion that neither the elusive G-spot nor the vaginal orgasm exist. "Like most things that are about sex, people get very hot and bothered on either end of this, but I really can't say from my clinical practice that I'm at all convinced that there is a G-spot," Dr.

Tina Fey Summed Up Kim Kardashian's Nude Photo Shoot 3 Years Before It Even Happened No, Tina Fey isn't clairvoyant, but she did hint at why so many of us can't take our eyes off of Kim Kardashian's recent nude photo shoot with Paper Magazine in her book Bossypants three years ago. As Twitter user Ryan Nelson pointed out on Nov. 13, Tina Fey briefly discussed Kim K's booty in her best-selling memoir Bossypants and summed up why we're all so enamored with it better than any blog, think piece or news article has in the last three days. If you're reading this on a mobile device, here's the full text: "I think the first real change in women’s body image came when JLo turned it butt-style.

Consent vs Desire article FR & EN “Consensual sex” is not a feminist sexuality. Consent can be obtained by force, by pressure, and simply by inequality … Consensual sex can also be rape : a daily experience for women ; prostitution, where money is the pressure, marital rape, where everyday life is the pressure, incest, where confidence and dependence are the pressure, harassment which sometimes leads to “consensual” rape, BDSM where pure lies lead to « consensual » rape script, etc. Indeed, consent is merely an answer – “Yes” or “No” – to someone else’s desire. In a global context of inequality, it is a reaction, a capitulation to the male class program of annihilating our subjectivity and humanity.

The History of Virgin Births There do happen to be a lot of feminists out there who are Christians. You would never know it from reading this site around Christmas however (or the piece on Good Friday about rejecting religion). Religious skepticism is not required to be feminist. I don't object to these articles appearing on this site (there are a lot of prominent feminist atheists/agnostics out there), but I wish there would be some stuff by religious feminists or at least a toning down of the relentless cynicism Jezebel feels towards Christmas.

In defense of Kim Kardashian and her critics Celebrities create contention. They often appear to break social conventions when in fact they themselves are confined within them.