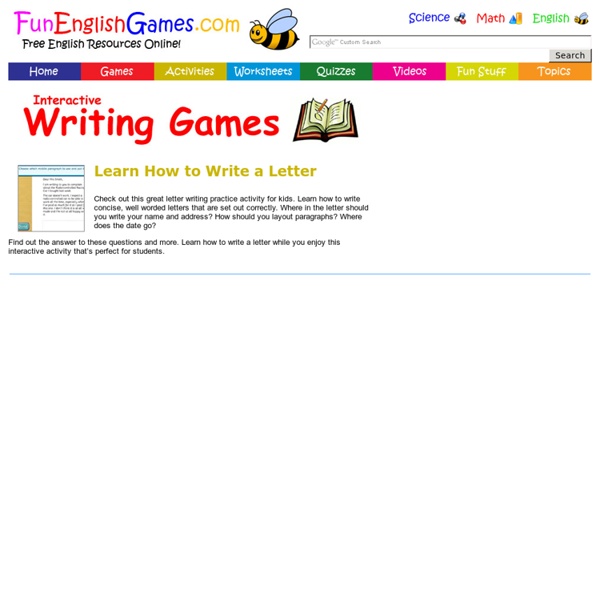 WebEnglish.se ⋆ for English (ESL/EFL) Teachers in Sweden Friendly Letter Maker - Learn to Write a Friendly Letter! ABCya is the leader in free educational computer games and mobile apps for kids. The innovation of a grade school teacher, ABCya is an award-winning destination for elementary students that offers hundreds of fun, engaging learning activities. Millions of kids, parents, and teachers visit ABCya.com each month, playing over 1 billion games last year. Apple, The New York Times, USA Today, Parents Magazine and Scholastic, to name just a few, have featured ABCya’s popular educational games. ABCya’s award-winning Preschool computer games and apps are conceived and realized under the direction of a certified technology education teacher, and have been trusted by parents and teachers for ten years. Our educational games are easy to use and classroom friendly, with a focus on the alphabet, numbers, shapes, storybooks, art, music, holidays and much more!

Parts of Speech The parts of speech explain how a word is used in a sentence. There are eight main parts of speech (also know as word classes): nouns, pronouns, adjectives, verbs, adverbs, prepositions, conjunctions and interjections. Most parts of speech can be divided into sub-classes.Prepositions can be divided into prepositions of time, prepositions of place etc. It is important to know that a word can sometimes be in more than one part of speech. Increase can be a verb e.g. The eight main parts of speech in English are: NOUN - (Naming word) A noun is the name of a person, place, thing or idea. Examples of nouns: Daniel, London, table, dog, teacher, pen, city, happiness, hope Example sentences: Steve lives in Sydney. PRONOUN - (Replaces a Noun) A pronoun is used in place of a noun or noun phrase to avoid repetition. Examples of pronouns: I, you, we, they, he, she, it, me, us, them, him, her, this, those Example sentences: Mary is tired. ADJECTIVE - (Describing word) VERB - (Action Word) Examples: Ouch!

Tools for Educators - free worksheet templates, printable game templates, 100% customizable worksheet makers with images! TPR World Home | LearnEnglishTeens Who/What/Where/When/Why/How in the world... Happy Halloween SLPeeps! "I love when Halloween is on a Wednesday"... said NO person who works with or has children EVER! I hope you're surviving this crazy week! We've been having a blast with the "I Mustache You a Question" material I posted last week. However, it really helps me to see what students are still struggling with when it comes to answering and formulating questions. You can grab this document of posters free here. Also... Enjoy Halloween! Making Learning Fun Teacher Lesson Plans, Printables & Worksheets by Grade or Subject - TeacherVision.com 1000s FREE Primary Teaching Resources & Printables - EYFS, KS1 and KS2 - SparkleBox