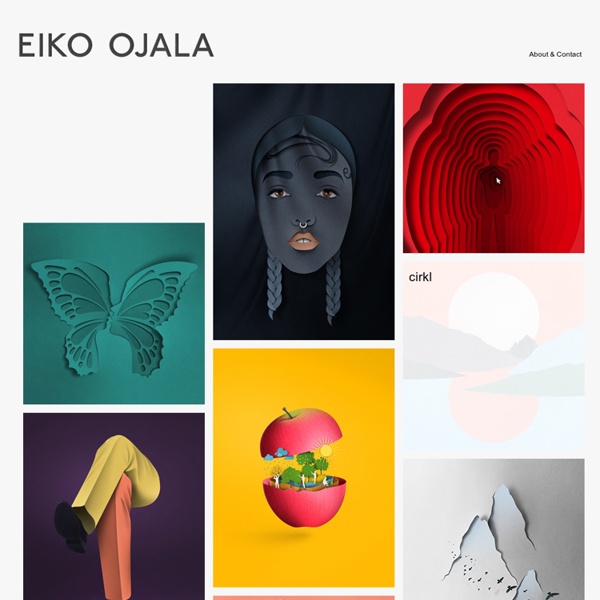 Art Architect and digital artist Laurent Rosset creates sweeping photographic landscapes the seem to curl upward into infinity like an enormous wave that obliterates the sky. Rosset uses much of his own photography to create each image and enjoys discovering how even slight manipulations can vastly change the composition or meaning of a photograph. You can see more of his work on Instagram, and if you liked this also check out Aydin Buyuktas. (via Colossal Submissions)

Geometry and Colour-loving Paper Sculptures by Lydia Kasumi Shirreff A guarantee of paper cuts must be part of the job for paper sculptor, Lydia Kasumi Shirreff. Precision with a blade is a must, as is an apparent and intoxicating love of colour and pattern. We like that there is a youthfully crafty joy in her work, as well as more geometry than you can shake a glue stick at. The immediacy and impact of colour when working with cut coloured paper gives it an eye-catching punch. However, it’s also the intricacy in some of the details that really draws you in and start to wonder about how long it all must take. From the edges of a feather to the delicate interior of a flower’s head, Lydia’s skills with a knife and ruler can be seen throughout.

Calvin Nicholls It was only a matter of time before Calvin Nicholls' life-long passion in art and wildlife combined! The Canadian has been a full-time paper sculpture artist since the mid-1980's. With such a variety of animals in his collection, he's essentially created his own paper zoo. Many of the animal paper sculptures belong in Nicholls' most extensive collection, which includes over 75 pieces for Follett Library Resources in McHenry Illinois. The series began in the mid-1990's and continues to this day. "Initially a rigid form is constructed which establishes the contours of the subject and provides a stable base upon which the detail pieces are attached," Nicholls' says, as he explains his process.

Post Line Flat Extension Wire by Chen Ju Wei No More Trippin Wires The thing with extension cords is that they look ugly and the wires are a prime accident zones for tripping. There is nothing Elegant about them! Unless you’re looking at the “Post Line”, this one’s a gorgeous concept that makes full use of the circuit-printing technology and electrostatic paste material. Use it from point A (gadget) to point B (wall socket) by sticking it flat to the floor, and if it becomes less sticky and grimy, simply wipe it clean and its sticky flat extension cord tape again! Designer: Chen Ju Wei

The 100 best iPad apps We've gathered together the very best iPad apps in Apple's App Store – and many are free. You're sure to find a timelessly brilliant app that meets your needs, saving you the hassle of searching through the hundreds of thousands available. Whether you're looking to design on your iPad, carry out research, find inspiration, or improve your task management and productivity there are tons of iPad apps in our list. So here goes, in no particular order... 01. Adobe Capture CC

Foldable Sewing Machine by Richard Burrow at New Designers Plymouth University graduate Richard Burrow presents a folding sewing machine at London graduate show New Designers this week. Burrow created the conceptual prototype to remove some of the rigmarole from carrying out simple clothing repairs at home. The machine would be less bulky and awkward to store than conventional machines, and lighter and simpler to take out and assemble. It would include only the basic functions required for alterations and repairs with simplified controls so users wouldn't be daunted or waste time figuring out how to use it. New Designers continues at the Building Design Centre in Islington until 7 July and showcases the work of over 3500 graduate designers. Read more details about the show in our earlier story and check out photos from the first day in our album on Facebook.

The fall and rise of Dutch design The question 'What is Dutch graphic design now?' is harder to answer than it used to be. The Netherlands, like London, has become a Mecca for designers seeking a highly creative place to work that offers many opportunities. Dutch graphic design was once unambiguously the creation of the Dutch. Now it's produced by a multinational cast of designers who perhaps travelled there to study and stayed, or simply decided that it would make an ideal base from which to make a fresh start.

Natali Prosvetova — The New Era Museum She continued to be fascinated by a new hobby, developing her skills from just capturing images with iPhone, to moving into the art of iPhoneography. From small time killing habit iPhoneography became her biggest addiction which almost changed her life. Starting from June 2011 her works has been constantly published in the online galery Pixels: The Art of the iPhone and she was introduced to the Pixels community as first iPhoneartist from Russia. Gallery shows/events: A selection of Natali's works have been exhibited at the Renaissance Fine Art & Design Gallery in Carmel, USA, at the Mobile Innovation Network Aotearoa (MINA) in New Zealand,

New Urban Geodes on the Streets of L.A. by Paige Smith Surrounding an exhibition at Maker City LA, artist Paige Smith A.K.A. a common name (previously), began to install new crystalized rock formations around the streets of LA. The geodesic rock formations which she refers to as urban geodes are created mostly with paper and spray paint or cast resin in random cracks and crevices around the city. She’s also installed geodes in Spain, Istanbul, Jordan, South Korea, and elsewhere around the world over the last few years. Iron Craft Challenge #1 – Paper Cut Map Our first challenge for the second year of Iron Craft was to make something with paper. I channeled my inner Dr. Russ and did a paper cut map of the city of Amsterdam. We recently had the bathrooms redone in our house.

How to Build a Rainbow Igloo Thanks to an ingenious mother from Edmonton it’s quite possible nobody will every build a plain white igloo again. The adventure began with a kernel of an idea from Brigid Burton, whose daughter Kathleen Starrie and boyfriend Daniel Gray, an engineering student, were coming for a winter visit from New Zealand. Wanting to “keep him occupied” during the frigid winter days that often dip down to -25 °F (-31 °C), last October she began filling paper cartons with colored water and setting them outside to form translucent ice bricks. She hoped Gray’s engineering skills would do the rest. Like a total champ he accepted the challenge and with the help of additional family and neighbors the team spent nearly 150 hours fitting the 500 ice bricks into place. After completion the raingbow igloo was so visually striking the local news showed up to do a feature on it.