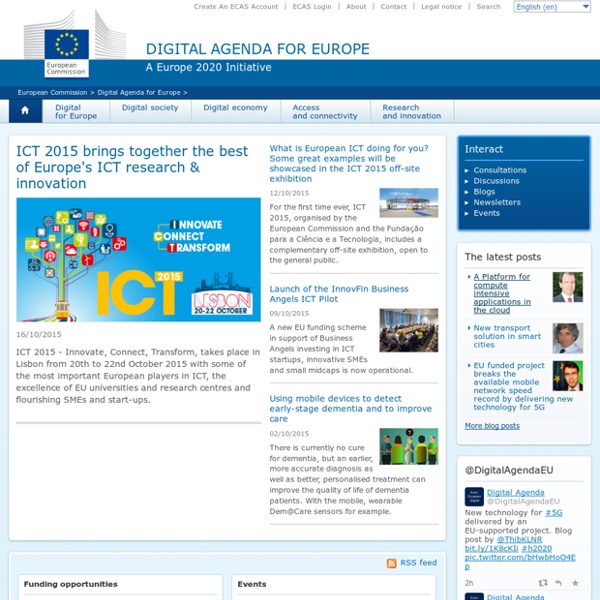 Robotic Start-up Companies Instructions: Use Google's directional and + and - markers on the left of the map to navigate and hone in on an area of interest (or double click near where you want to enlarge). Click on marker to get pop-up window with name, location and link to company's website. Filter: This global map does not cover an additional 1,000+ Ancillary Businesses such as image systems, software developers, engineering and consulting firms, integrators and resellers, designers, servo, laser and stereo camera providers, etc. Nor does it cover 250+ other educational facilities and research labs. These can be found in our Ancillary Businesses and Educational and Research Facilities Directories.

WebHome < Concerto < TWiki FP7 ICT CONCERTO (Content and cOntext aware delivery for iNteraCtive multimedia healthcaRe applications) is a STREP project in the EU's Seventh Framework Programme aiming at designing and validating several critical building blocks of telemedicine applications. These include network-aware applications that rely on content-aware codecs and storage formats, carried over an application-aware network. The ultimate aim of FP7 ICT CONCERTO is to provide high a Quality of Experience (QoE) for medics, which is a necessary condition for providing flawless medical diagnosing of the highest reliability. To reach the above goals, CONCERTO is broken down in 7 work packages, further divided into tasks directly related to the project main objectives. CONCERTO will achieve this ambitious goal by the joint optimization of several tightly coupled system components, which form an organic ensemble, rather than a simple interconnected conglomerate.

How to Participate in Hacker News - edw519 I recently received an inquiry from a Hacker News newcomer on how to best participate in the community. I was ready to reply, "Just follow the guidelines and be yourself." Then I realized that it was actually a very good question that deserved a much better answer. So here is my more detailed answer, based upon many years of hard knocks. First of all, follow the guidelines! This is a necessary, but not sufficient condition.

Pharma and facebook: the cost of disengagement Yesterday, facebook opened comments on all its fan pages and consequently closed a chapter in the book of pharma social media engagement. As expected, (and brilliantly monitored by Jonathan Richman here) many companies, like Novartis, immediately shut down their fan pages in reaction to these changes. Other companies though, like Boehringer or JNJ, had enabled comments ages ago already and happily continued engaging on facebook. Still some others, like Pfizer or GSK seemed yet unsure as to how to handle this situation. x planes I’ve been busy raising an heir, and also plotting what will be the greatest science fiction novel of the new millennium (in my head, of course). I’ll be back soon. oh, ok. this can’t really wait until next year.. (via Code One Magazine’s Facebook page) the year has escaped me.

Statistics - IFR International Federation of Robotics World Robotics 2013 Service Robots The total number of professional service robots sold in 2012 rose by a relatively low 2%compared to 2011 to 16,067 units up from 15,776 in 2011. The sales value slightly decreased by 1%to US$3.42 billion. Digital Agenda for Europe Pieter VAN DE GRAAF If there is a common message from the European events on eHealth that I have attended recently, it is that patients are increasingly expecting to have more say in their personal healthcare, with the help of digital tools. Employment participation of older workers is under-researched. We discussed this topic with experts in the field at the European Summit on Innovation for Active and healthy Ageing. This will also be the subject of the first call for proposals by the Joint Programming Initiative “More Years, Better Lives”

Making the Grade: Why the Cheapest Maple Syrup Tastes Best - Yoni Appelbaum - Life As our sense of American identity has evolved, the labels on our syrup, long a symbol of American authenticity, have not always kept up The market for maple syrup offers an odd inversion. The thin, pale fluid labeled Fancy or Grade A Light Amber commands the highest prices. It is the white bread of condiments, an inoffensive accompaniment to more flavorful fare. The robust, thick syrup marked Grade B fairly bursts with maple flavor, but sells at a significant discount.

Mobile Site or Mobile App: Which Should You Build First? [INFOGRAPHIC] Astute Internet observers know by now that the future of the web is mobile. More and more consumers will access data and information via smartphones, tablets and other portable devices. So businesses need to prepare by beefing up their presences on the mobile web. But is it better to get started by creating a mobile-optimized website or by building a standalone mobile app? A mobile app is faster, more interactive and can integrate with all kinds of other phone features. But the app must be installed to be of any use at all, while a good mobile site can simply be navigated to on a user's whim.

Download Graphic Images from the Hillis/Bull Lab Return to "Download Files" Page You are welcome to download the following graphic image of the Tree of Life for non-commercial, educational purposes: Tree of Life (~3,000 species, based on rRNA sequences) (pdf, 368 KB) (see Science, 2003, 300:1692-1697) This file can be printed as a wall poster. Printing at least 54" wide is recommended. * Professional service robots - Continued Increase Professional service robots - Continued Increase World Robotics 2012 - Service Robots published Taipei, 30 August 2012 - About 16,400 service robots for professional use were sold in 2011, 9% more than in 2010, reports the IFR Statistical Department in the new study "World Robotics 2012 - Service Robots", which was published on Thursday in Taipei. The sales value increased by 6% to US$ 3.6 billion.

Android Orphans: Visualizing a Sad History of Support The announcement that Nexus One users won’t be getting upgraded to Android 4.0 Ice Cream Sandwich led some to justifiably question Google’s support of their devices. I look at it a little differently: Nexus One owners are lucky. I’ve been researching the history of OS updates on Android phones and Nexus One users have fared much, much better than most Android buyers. I went back and found every Android phone shipped in the United States1 up through the middle of last year. I then tracked down every update that was released for each device - be it a major OS upgrade or a minor support patch - as well as prices and release & discontinuation dates. I compared these dates & versions to the currently shipping version of Android at the time.

Mapping The Next Three Decades of Health Technology When science fiction films depict the future, the best writers and directors are often less concerned with accurately predicting how specific technologies might reshape the world than they are with confronting the moral or philosophical quandaries of present day. It’s what makes those stories compelling--and relatable. When futurists attempt to tell us how (and when) technology leaps will occur, they’re not only speculating about what we’re capable of achieving in the coming decades but also imploring us to prepare--scientifically and psychologically--for those events. Envisioning Technology, the firm behind the massive infographic explorations of the future of emerging technology and the future of education technology, is, as you might guess, run by a futurist: Michell Zappa. His most recent visualization maps the next three decades of health technology, charting how regeneration, augmentation, diagnostics, treatments, biogerontology, and telemedicine will change over time.

The initiative focuses on two areas: cultural heritage – creating electronic versions of the materials in Europe's libraries, archives and museums, making them available online, for work, study or leisure, and preserving them for future generations; scientific information – making research findings more widely available online and keeping them available over time. by feillet Oct 12