The First Trillionaires Will Make Their Fortunes in Space 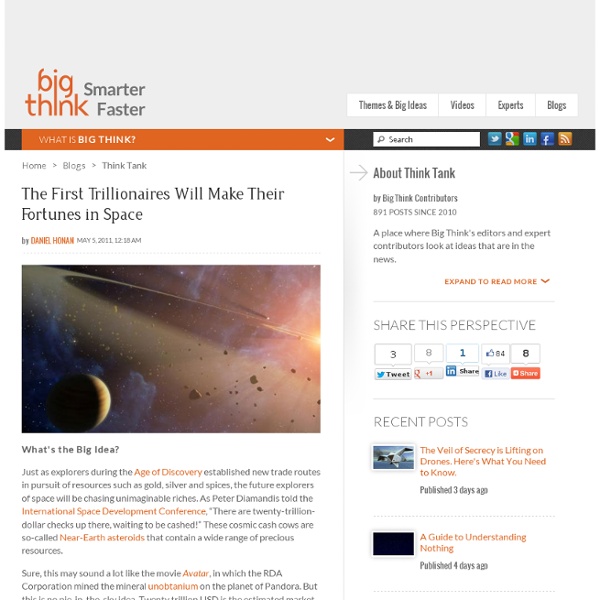 What's the Big Idea? Just as explorers during the Age of Discovery established new trade routes in pursuit of resources such as gold, silver and spices, the future explorers of space will be chasing unimaginable riches. As Peter Diamandis told the International Space Development Conference, “There are twenty-trillion-dollar checks up there, waiting to be cashed!” These cosmic cash cows are so-called Near-Earth asteroids that contain a wide range of precious resources. Sure, this may sound a lot like the movie Avatar, in which the RDA Corporation mined the mineral unobtanium on the planet of Pandora. But this is no pie-in-the-sky idea. Peter Diamandis, who founded the non-profit X Prize Foundation to create a rewards incentive program to bring about "radical breakthroughs for the benefit of humanity," believes the enormous financial opportunities in space will spur innovation. What's the significance? Why Should I Care? Asteroids represent a dual threat and opportunity for humanity. Related:  investing

BBC ON THIS DAY | 21 | 1969: Man takes first steps on the Moon 1969: Man takes first steps on the Moon American Neil Armstrong has become the first man to walk on the Moon. The astronaut stepped onto the Moon's surface, in the Sea of Tranquility, at 0256 GMT, nearly 20 minutes after first opening the hatch on the Eagle landing craft. Armstrong had earlier reported the lunar module's safe landing at 2017 GMT with the words: "Houston, Tranquility Base here. As he put his left foot down first Armstrong declared: "That's one small step for man, one giant leap for mankind." He described the surface as being like powdered charcoal and the landing craft left a crater about a foot deep. 'We came in peace' The historic moments were captured on television cameras installed on the Eagle and turned on by Armstrong. Armstrong spent his first few minutes on the Moon taking photographs and soil samples in case the mission had to be aborted suddenly. After filming their experience with a portable television camera the astronauts received a message from the US President.

List of companies for inquiry Lunar outpost (NASA) Concept art from NASA showing astronauts entering a lunar outpost. (2006) A lunar outpost was an element of the George W. Bush era Vision for Space Exploration, which has been replaced with President Barack Obama's space policy.[1] The outpost would have been an inhabited facility on the surface of the Moon. At the time it was proposed, NASA was to construct the outpost over the five years between 2019 and 2024. The United States Congress directed that the U.S. portion, "shall be designated the Neil A. The outpost design included: As planned, an incremental buildup would begin with four-person crews making several seven-day visits to the moon until their power supplies, rovers and living quarters were operational. The concept of establishing a long-term human presence on the Moon can be traced back to the late 1950s. An early lunar outpost design based on a module design. A lunar base for six to twelve people, built into an inflatable spherical habitat.

Millionaires bet on space travel Closer to a space vacation? CNBC's Jon Fortt and Jane Wells run down today's hot topics, including space travel, e-cigarette promotion in the U.K. and the maker of "Candy Crush" files for an IPO. Knight Frank also noted the rising trend for investing in space research, be it space travel or asteroid mining. (Read more: Precious metal hunters look to outer space) Bailey told CNBC that increasing numbers of wealthy individuals — defined in Knight Frank's report as those with at least $30 million in investable assets — had shown interest in the space industry over the last 12 months. "This is a risky sector," Bailey said. According to Space Affairs, established in 2000 as the "world's first commercial space agency", suborbital space flight will be a possibility for both businesses and tourists within years, rather than decades. "In the next few years, suborbital spacecraft will transport scientific payloads and passengers into space.

Initial public offering History[edit] In March 1602 the “Vereenigde Oost-Indische Compagnie (VOC), or Dutch East India Company was formed. The VOC was the first modern company to issue public shares, and it is this issuance, at the beginning of the 17th century, that is considered the first modern IPO. c1783.[5] c1783.[5] Reasons for listing[edit] Advantages[edit] When a company lists its securities on a public exchange, the money paid by the investing public for the newly issued shares goes directly to the company (primary offering) as well as to any early private investors who opt to sell all or a portion of their holdings (secondary offering) as part of the larger IPO. Once a company is listed, it is able to issue additional common shares in a number of different ways, one of which is the follow-on offering. An IPO accords several benefits to the previously private company: Disadvantages[edit] There are several disadvantages to completing an initial public offering: Procedure[edit] Advance planning[edit]

Making Money in Outer Space (AMZN, BA, GOOGL, RTN) In the 1981 film Outland, Sean Connery stars as an old-school lawman who keeps order in a mining colony on one of Jupiter's moons, armed only with his wits and a trusty Browning 2000 shotgun. Outland is set in a future that has commercial space travel and off-planet mining, and the latter took a giant leap forward into reality last week when the private company Planetary Resources announced its plan to start mining asteroids in just more than 10 years' time. While the space industry isn't easily accessible to private investors, its prospects mean that one day the sector will become the toast of the stock market. Money from satellitesA few public companies have major interests in space, and the one that immediately springs to mind is the satellite communications specialist Inmarsat. But so far the space industry is pretty much limited to satellites and getting them into orbit. Another problem is that rare metals go for high prices because they are, well, rare. Space to invest?

Space Investments | Space Ventures Investors Space Investments, through space funds, space stocks, crowd-funded and private investor placements, will be the enabler of the next Space Race. Space 2.0, NewSpace, and Commercial Space, are the current terms for the next Space Race, and like any feat of exploration, the best rocket fuel is finance. Space Ventures Investors is currently developing a range of space industry financial products to enable private investors and institutional investor to actively invest in space. Is Space an Emerging Market? As a growth industry, the dot.com boom and digital revolution will be superseded by the grandeur of space. The history of space is that it was born from Cold War conflict, and as the Cold War cooled so did the space race.

Mining the moon will become a viable venture As space-based commerce dawns, an ambitious few want to mine the Moon and near-Earth asteroids for precious metals and more. In May last year, a spacecraft called Dragon made history. Developed by Space X, a California-based private space transport company, the craft became the first commercial spacecraft to ferry cargo between the International Space Station and Earth. With Nasa scheduling a third re-supply mission for 9 December this year, the craft proves that a private space business can succeed. 'We're opening up a whole new world to humanity that has abundant resources that will help project us into a multi-planet species,' says Bob Richards, chief executive of lunar lander developer, Moon Express. Richards heads up one of a growing band of new and ambitious private organisations that are very serious about mining the 'Moon or mining asteroids. Metal mining The motivation for each entity is minerals and precious metals. Fly me to the Moon Beyond the Moon Critical resource

Public Space Companies Publicly traded space companies are developing technology that will help make space settlement possible. You can contribute to the space settlement effort by investing in these companies (by purchasing stock) and/or lobbying Congress for favorable legislation. U.S.-based public companies involved in space-related activities include the following. ALCOA Inc. As in any industry, space companies come and go. If you know of a space company missing from the list that you feel should be included, please Contact Us and let us know. Note: all investing must be done at the investor's own risk. Read about a way to make private space development potentially very profitable, without depending on government funding.