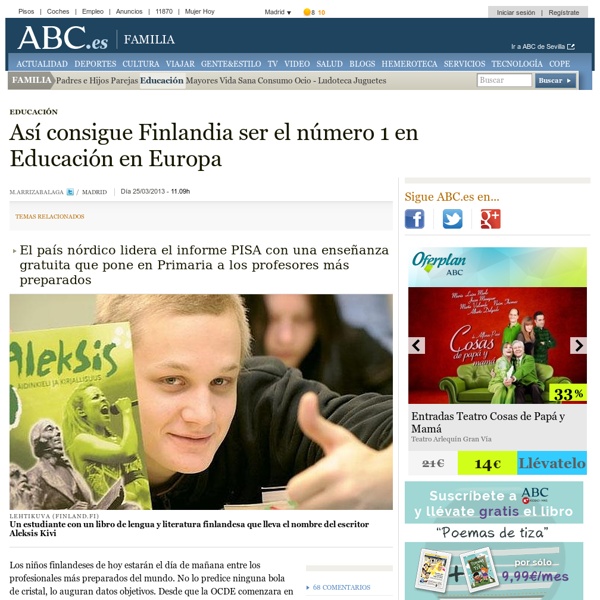 Reading, Writing, Empathy: The Rise of 'Social Emotional Learning' - Education Marc Brackett never liked school. “I was always bored,” he says, “and I never felt like any of my teachers really cared. I can’t think of anybody that made me feel inspired.” It’s a surprising complaint coming from a 42-year-old Yale research scientist with a 27-page CV and nearly $4 million in career funding.

6 Things You Learned in School that Don’t Apply in the Real World by Daniel on May 26, 2013 | ShareThis Email This Post Note from Celes : Have problems with procrastination ? Join my upcoming Anti-Procrastination Course in June ! Why Finland Leads in Education Pasi Sahlberg I am now relaxing after an intensive but successful NZEI Te Riu Roa annual meeting and conference and I feel very honoured to have been elected onto our National Executive for another term. We had three major reports presented, one on the future of the teaching profession, and the other two about educating Maori and Pasifika for success. We watched an amazing video that celebrated the success of some Maori siblings (three brothers and a sister) who have become leaders in Maori education because of the support of their parents. We had a sobering presentation from our Children's Commissioner, Russell Wills, who is adamant that more needs to be done to address child poverty.

Rethinking faculty roles for a new era The three-tiered faculty system is not working and must change. by Adrianna Kezar As the article “Sessionals, up close” describes, the faculty in Canada, the U.S and worldwide is changing rapidly toward a more contingent faculty. While the numbers of contingent faculty positions continue to increase (even more so in the U.S. than in Canada), there has been little systematic discussion, leadership or policymaking related to the issue. The Delphi Project on the Changing Faculty and Student Success aims to address this void in leadership and policy by engaging stakeholders across the higher education enterprise in the U.S (academic leaders, unions, disciplinary societies, accreditors and policymakers) in a thoughtful discussion about the imperative for change.

The future of education eliminates the classroom, because the world is your class Hypercities (credit: UCLA et at.) Technology can turn our entire lives into learning experiences via “socialstructed learning,” an aggregation of microlearning experiences drawn from a rich ecology of content and driven not by grades but by social and intrinsic rewards, suggests Marina Gorbis, Executive Director at the Institute for the Future, in Fast Company. “Today’s obsession with MOOCs is a reminder of the old forecasting paradigm: In the early stages of technology introduction we try to fit new technologies into existing social structures in ways that have become familiar to us,” she says. What if we could access historical, artistic, demographic, environmental, architectural, and other kinds of information embedded in the real world via augmented reality devices? “This is exactly what a project from USC and UCLA called HyperCities is doing: layering historical information on the actual city terrain.

How To Connect With Digitally Distracted Students 10 Ways To Become A Better Online Learner 5.43K Views 0 Likes There are some quick and easy ways to become a better online learner. Ethiopian kids hack OLPCs in 5 months with zero instruction What happens if you give a thousand Motorola Zoom tablet PCs to Ethiopian kids who have never even seen a printed word? Within five months, they'll start teaching themselves English while circumventing the security on your OS to customize settings and activate disabled hardware. Whoa. The One Laptop Per Child project started as a way of delivering technology and resources to schools in countries with little or no education infrastructure, using inexpensive computers to improve traditional curricula. What the OLPC Project has realized over the last five or six years, though, is that teaching kids stuff is really not that valuable.

Why Are Finnish Kids So Smart? Update: TVOParents' Cheryl Jackson interviewed Dr. Pasi Sahlberg, quoted extensively in the blog post below, about the Finnish education system in November 2011. In the lead-up to TVO's Learning 2030 event in Kitchener-Waterloo this weekend, producer Eric Bombicino looks at an educational superstar: Finland. Finland is seen by many as an educational superpower. Their students have placed at the top or near the top of the Organization for Economic Co-operation and Development's (OECD) Programme for International Student Assessment (PISA) over the past decade. Assessing Critical Thinking Skills May 3, 2013 By: Maryellen Weimer, PhD in Educational Assessment The guidelines suggested below propose how critical thinking skills can be assessed “scientifically” in psychology courses and programs. The authors begin by noting something about psychology faculty that is true of faculty in many other disciplines, which makes this article relevant to a much larger audience.

Indian man single-handedly plants a 1,360-acre forest A little more than 30 years ago, a teenager named Jadav "Molai" Payeng began burying seeds along a barren sandbar near his birthplace in northern India's Assam region to grow a refuge for wildlife. Not long after, he decided to dedicate his life to this endeavor, so he moved to the site so he could work full-time creating a lush new forest ecosystem. Incredibly, the spot today hosts a sprawling 1,360 acres of jungle that Payeng planted — single-handedly. The Times of India recently caught up with Payeng in his remote forest lodge to learn more about how he came to leave such an indelible mark on the landscape. It all started way back in 1979, when floods washed a large number of snakes ashore on the sandbar.