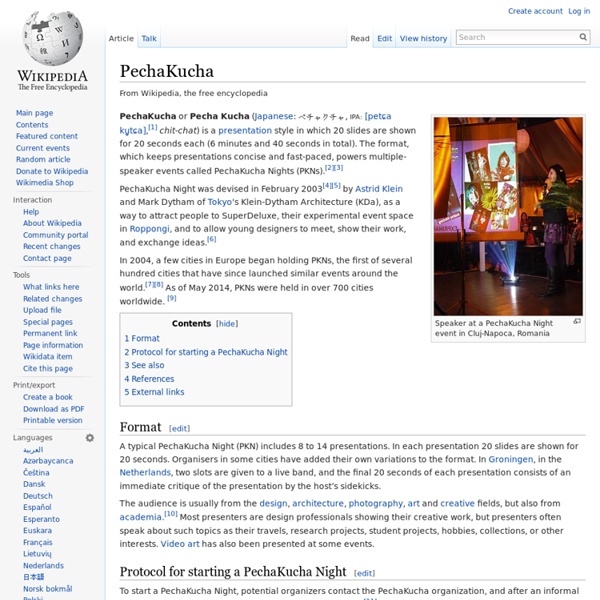 Speaker at a PechaKucha Night event in Cluj-Napoca, Romania PechaKucha or Pecha Kucha (Japanese: ペチャクチャ, IPA: [petɕa ku͍̥tɕa],[1] chit-chat) is a presentation style in which 20 slides are shown for 20 seconds each (6 minutes and 40 seconds in total). The format, which keeps presentations concise and fast-paced, powers multiple-speaker events called PechaKucha Nights (PKNs).[2][3] PechaKucha Night was devised in February 2003[4][5] by Astrid Klein and Mark Dytham of Tokyo's Klein-Dytham Architecture (KDa), as a way to attract people to SuperDeluxe, their experimental event space in Roppongi, and to allow young designers to meet, show their work, and exchange ideas.[6] In 2004, a few cities in Europe began holding PKNs, the first of several hundred cities that have since launched similar events around the world.[7][8] As of May 2014, PKNs were held in over 700 cities worldwide. [9] Format[edit] Protocol for starting a PechaKucha Night[edit] See also[edit] References[edit] External links[edit]

UKOER Support From CETISwiki This page provides an overview of CETIS' support for the UKOER programme. Supporting UKOER CETIS support for the programme is intended not only to help projects as they work out how their own practice of sharing OERs but also to inform the programme as a whole, shape any future work with OERs, and contribute to the wider OER community. Our approach throughout will be to build on specific issues raised by projects to produce general guidance and reflection. In the first instance this information will be available through the OER pages linked to by the navigation box to the right. CETIS support for the UKOER programme is both part of our wider remit as an Innovation Centre and a specific piece of work for JISC. Key outputs Some of the key outputs of the support work will include: People involved R. All of our contact details can be found on CETIS contacts

Stories, tales and myths in teaching Story-telling is one of the oldest forms of instruction, and one of the best. Stories are basic: we start telling our children about the world by telling them stories. We gossip by telling stories about other people. We pick up how to do our jobs by listening to our colleagues' stories of their experience, telling our own stories and getting reactions to them. We discuss our problems by telling the story, "You'll never guess what he said then Is chatting over the garden fence a myth in itself embodying assumptions about the nature of neighbourliness in the suburbs? I could go on about the status of stories, but that is not the point, fascinating though it is. Use them. See here for the place of the story in the overall learning process

Presentation - McAndrew - OLnet one year on Notes from Patrick's presentation - OLnet one year on (Chris Pegler was due to do SCORE presentation in this slot, but had problems with audio, so Patrick instead does his OLnet talk from this afternoon.) Open Learning network - a research project, a sister project to SCORE, funded by the Hewlett Foundation. Has been a huge investment by the Hewlett Foundation in kicking off Open Educational Resource (OER) activity. Purpose is to establish how research can be supported, linked together, shared, etc. Has been a very interesting period for OER, investment through JISC in the UK, even bigger change in US - OER are driving changes to the school and college systems. Six areas where there are key issues. First - how do you design for reuse in this new open world. Second - building and using tools for us and for others (including Cohere) Third - accreditaiton vs recognition, changes in the education process. Fourth - Content - has a special role, is an attractors. Questions:

The Art of Storytelling For Remarkable Leaders I don’t like to cry in movies, it feels weird and stupid to get that emotional over a make believe story. So I’m pleased to say only one movie studio has made me achieve this embarrassing milestone. Dang you Pixar! I was with my wife watching UP. Sitting there watching a man and wife getting married, moving in together, building their house, going on picnics, selling balloons, reading books, holding hands, watching clouds in the sky, building a nursery, saving for a vacation, fixing flat tires, repairing fences, and then slowly the couple is old and they are dancing, smiling, doing chores, and looking at old pictures together. Then Pixar pulled the trigger. The whole theater is bawling and all of this happened in less than 5 minutes. The reason I bring this all up is to demonstrate the power of storytelling. How many people do you meet, and in five minutes, have you crying like a baby because you feel so connected? Not often…right? But it’s not just good advice for stories. 1. 2. 3. 4.

Advancing a New Form of Comedy - Storytelling It could easily be an operatic teenage drama, but Ms. Eisenberg, now in her 30s, told this story last week at Upright Citizens Brigade in Chelsea with directness, humor and understatement. Her point of view came across in the details: she described sex on the beach as “like grinding pepper.” Wearing a leopard-skin jacket, her bangs swaying as her arms spun circles in the air, Ms. Eisenberg did not overhype or wallow. Instead she evoked a naïve kid indifferent to consequences. Ms. While telling stories is about as old as life itself, storytelling, as a subgenre of comedy and increasingly theater, is relatively new, growing rapidly over the past decade. The soft-spoken Seth Lind hosts a charming monthly show in the East Village called Told. Some, like Todd Bieber, employ multimedia, as in his account of making spectacularly lame low-budget TV commercials in his hometown in “Commercial Interruption.” But storytelling’s bread and butter is dramatic heartache and romantic misadventure. Ms.

How storytelling spurs success Storytelling isn't just for old folks and kids. It can help you move forward in your career - both by showing what you've accomplished and by persuading employees to trust you. By Vickie Elmer, contributor Marriott International's Ed Fuller loves to tell stories. One of his favorites is set at the Boston Marriott Copley Place in 1985, where he was general manager. Just a month after it opened, catering sales were $300,000 below budget. The "issue," it turned out, was not what Fuller had feared. Fuller uses that story -- and others -- to teach new managers about Marriott's priorities: serving the customer well, and serving its chowder hot. That sentiment is shared by executives at companies such as Microsoft (MSFT) and Pepsi (PEP), who use storytelling "to create a metaphor or an emotional boost," said Annette Simmons, a corporate storytelling trainer and an author of two books on the topic. Storytelling lessons from company front lines ...and what to avoid See also:

To Attract More Girls to STEM, Bring More Storytelling to Science | Budding Scientist A student from High Technology High School in Lincroft, New Jersey CREDIT: Marissa Hazel Guest Post by Jonathan Olsen and Sarah Gross, teachers at High Technology High School in Lincroft, New Jersey Women and girls are historically underrepresented in STEM (science, technology, engineering, and math) fields and much has been written lately about why girls in school seem disinterested in these areas. As STEM becomes more important in our increasingly interconnected global society, it becomes even more imperative that educators find ways to encourage girls to participate in these fields. A few weeks ago, researchers at the Universities of Pittsburgh and Michigan released the results of a study that reflected many girls’ antipathy toward all things STEM. As educators in a STEM-focused high school, we come in contact with intellectually gifted female scientists every day–albeit young ones. Research has shown that storytelling activates the brain beyond mere word recognition.

Defining OER - WikiEducator From WikiEducator The concept of open education encapsulates a simple but powerful idea that the world’s knowledge is a public good and that the open web provides an extraordinary opportunity for everyone to share, use, and reuse knowledge. In short the "open" in Open Educational Resources means they must be free and provide the permissions to reuse, revise, remix and redistribute. However, we need to examine the concept in more detail. Reflecting on the requirements for a definition of OER Thinking about OER There is a diverse range of opinion on the specific requirements of what constitutes an open education resource. A precise definition of OER impinges on the range of opinions regarding fundamental questions associated with interpretations of the meaning of the freedom to learn, for example: Should a definition of OER include the requirement of an open content license, for example a Creative Commons license or the GNU Free Documentation License? Critical analysis of an OER definition

How To Remove Ambient Noise From Your Audio Files Using Audacity Audacity is a free program available for Mac, Windows and Linux, so most people should be able to download this and use it to clean up their recordings. Today we’ll take you through a few simple steps you can use on all recordings to remove background noise from audio. Install Audacity When you’ve downloaded Audacity, you’ll notice that it’s able to be used to import or record music and vocal tracks and can be used to mix tracks together for other purposes. Import Or Record Audio Either import the audio file you wish to clean up, or use Audacity as the recording tool. Isolate A Quiet Moment After importing, you’ll see the tracks of the audio file as separate lines in Audacity. Zoom in until you can find a moment where there was no deliberate sound in the track (the flattest bit you can find), such as when you paused for a moment. This will isolate a moment where all you recorded was the ambient background noise. Step 1 – Get Noise Profile This opens up a dialogue to remove the noise.