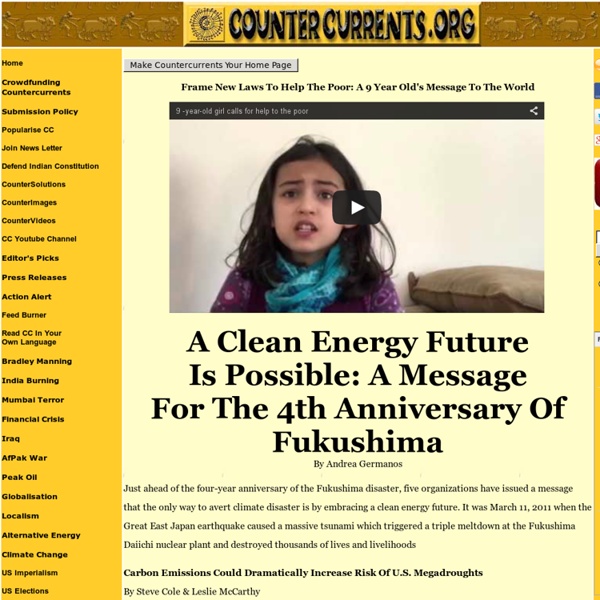 Global Warming/Climate Change Home Page 25 April, 2012 James Lovelock's Climate U-Turn By Dr Andrew Glikson It remains a mystery as to the nature of the evidence or reasons underlying James Lovelock's statement that he was 'alarmist' about climate change. Unfortunately, these statements are inconsistent with up-to-date climate data sets 03 April, 2012 The Deep Time Blueprints Of Anthropogenic Global Change (PDF) By Andrew Glikson “It is unthinkable that that a civilization which placed a man on the moon and explored the solar system cannot find the will to protect its own planet. 02 April, 2012 Global Warming According To Scientific Projections By Geert Jan van Oldenborgh & Rein Haarsma 1981 climate projection by Jim Hansen et al shows pretty good match with observations of past 30 years Climate Denial - In Hindsight By Bill Henderson A speculative interview with Mitt Romney if he were elected President 27 March, 2012 It’s Probably Too Late To Stop Warming By Christopher Mims Extremely Hot By Stefan Rahmstorf & Dim Coumou

Joe Bageant 7 cultural concepts we don't have in the U.S. From the end of October through the New Year and onto Valentine's Day, it's easy to forget that the holidays we celebrate are simply cultural constructs that we can choose to engage in — or not. The concepts and ideas we celebrate — like our spiritual beliefs and daily habits — are a choice, though sometimes it feels like we "have" to celebrate them, even if we don't feel like it. Culture is ours to do with as we choose, and that means that we can add, subtract, or edit celebrations or holidays as we see fit — because you and me and everyone reading this makes up our culture, and it is defined by us, for us, after all. If you want to add a new and different perspective to your life, there are plenty of other ways to recognize joy and beauty outside American traditions. Friluftsliv A hiker sits atop Trolltunga, or 'troll's tongue,' a famous rock formation in southwestern Norway. Friluftsliv translates directly from Norwegian as "free air life," which doesn't quite do it justice. Hygge

24 Ottobre | Una giornata di Azione per Il Clima Library Search the catalogue Find books, CDs, DVDs, ebooks and more in the City of Sydney library catalogue. Communication. Our libraries welcome people to connect, explore and learn. Our network Servicing the community for more than 100 years, the City’s library network offers a wide range of helpful services, including accessible branches, multicultural programs and exhibition space for artists. Branches There are 9 library branches in the local area with more to come. Collections Head to one of our library branches to make your way through more than 400,000 books available to borrow, as well a large number of CDs, DVDs, audio books and other items. Using the library Find out how to become a member, access the online catalogue, transfer items between branches, reserve or renew items you would like to borrow, among many of our services. Temporary waiver of PC access fees The City of Sydney will upgrade our public access computers in 2016 across all City of Sydney Library branches.

Worlds Most Isolated Tribe – Enter Their Mysterious Island & They’ll Kill You! Introducing the Sentinelese people. They’ve been kicking around this beautiful island for a whopping 60,000 years. They inhabit a tiny island in The Indian Ocean which is estimated to be approximately the size of Manhattan. From the sky it appears to be an idyllic island with amazing beaches and a dense forest, but tourists or fishermen don’t dare to set foot on this island, due to its inhabitants’ fearsome reputation. When outsiders approach their island, they swarm the shoreline and rain down arrows. The Sentinelese are highly mysterious. Modern history is filled with sad sagas of indigenous peoples eradicated or decimated by diseases borne by European visitors. That has not happened to the Sentinelese. The tribe killed two men in 2006 who were fishing too close to their island, and have been known to fire arrows and fling rocks at low-flying planes or helicopters on reconnaissance missions. Contacting the Sentinelese is a criminal act. Resources: Jade Small More Posts Comments: