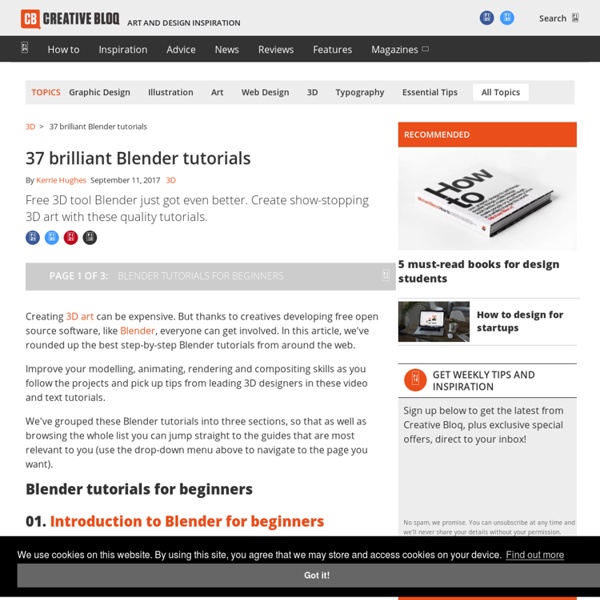 Creating 3D art can be expensive. But thanks to creatives developing open source software, like Blender, everyone can get involved. In this article, we've rounded up the best step-by-step Blender tutorials from around the web. Improve your modelling, animating, rendering and compositing skills as you follow the projects and pick up tips from leading 3D designers. We've grouped the tutorials into three sections, so that as well as browsing the whole list you can jump straight to the guides that are most relevant to you. Master the basics 01. Get started with the basics of Blender with this short video tutorial series from Blender Foundation certified trainer Jonathan Williamson. 02. Before you start creating anything in Blender, you need to master the basics. 03. 04. Blender expert Andrew Price reveals the secrets of realistic texturing in Blender in this detailed video tutorial. 05. 06. Get to grips with the complete workflow for setting up lighting for an outdoor scene. 07. 08. 09. 10.

Download Center Welcome to Pixologic's MatCap LibraryPixologic has created a library full of amazing MatCap materials from ZBrush artists who wish to share their work with the ZBrush community. This library gives you one unique location to view, download, and begin sculpting with that unique MatCap look that only ZBrush can give you. Enjoy the search. Blender Character Creation (intermediate) Upload Support on Patreon Sebastian Lague Loading... Working... ► Play all How to learn Blender 3D in under 24 hours Until the day when desktop holography becomes a reality, 3D will remain the wholly grail of the graphics world. But 3D can be a very technical craft. And each 3D program has its own idiosyncrasies, making it all a bit daunting. I cut my 3D chops on many programs that are now long dead and forgotten. Blender is one program I've wanted to learn for many years.

ZBrush matcap in Blender Hello there, I'm a french user of Blender and I found a simple way to add the MatCap look in Blender materials with the use of material node. To see the matcap in the 3d viewport you need to active the glsl preview.-First step: Get the matcap ! Modeling, UVmapping And Texturing A Low Poly T-Rex In Blender: Part 1 In this tutorial you’ll learn how to create an awesome low-poly dinosaur using Blender and Gimp. Artist Karan Shah will walk you through the entire modeling process step by step, and show you how to create an optimized model suitable for use in any game engine. We'll follow things up later this week with part two, where we’ll delve into Uvmapping and creating unique hand painted textures. Though this tutorial is made using Blender, the modeling work-flow is universal in approach and can easily be applied to any other software. So get started after the jump!

11 Useful Blender Tricks You May Not Know Like with any other graphical applications, Blender is equipped with hotkeys and keyboard shortcuts that users can utilize for various purposes – the majority of which is to speed up access. In this article, I’ll lead you through some of those useful hotkeys that for whatever reasons, aren’t very well known. #1: Hide Everything Except the Selection In complex scenes, this can be very useful as it reduces the clutter and mess when working on you’re scene so you can focus on just these objects in the meantime. How to Make Fire in Cycles 1. Delete the default Cube and add a Circle. 2. With the Circle selected, select the Quick Smoke menu entry, as seen below. 3. Under the Render Settings, make sure that the Device is set to CPU. Make a Grassy Meadow Scene Using The Grass Essentials we’ll be making a realistic grassy meadow scene, complete with a hazy morning fog and hiking trail. A few more steps and you can get this: Downloads FYI: The Grass Essentials ends it’s introductory pricing on the 3rd of February. Right now is the lowest the price will ever be – get it before the normal pricing begins on Wednesday. Create something cool using the tutorial?

Create And Render A Still Life Scene In Blender, Using Cycles Today, we'll have a brief introduction to Blender's new rendering engine - Cycles. This tutorial will cover modeling a small and easy still life scene, setting up different types of materials used in cycles and then finally lighting and rendering the scene. First we'll create a simple scene, starting with the tea set. Delete all default objects in a new file, press Shift+A and add a Cylinder.