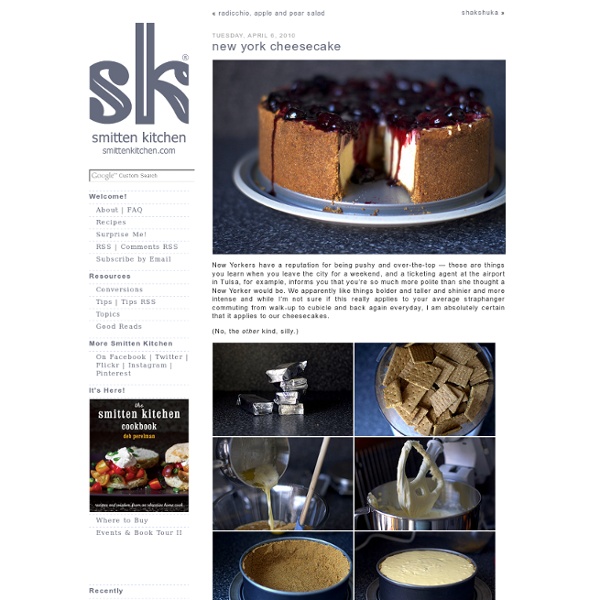 New Yorkers have a reputation for being pushy and over-the-top — these are things you learn when you leave the city for a weekend, and a ticketing agent at the airport in Tulsa, for example, informs you that you’re so much more polite than she thought a New Yorker would be. We apparently like things bolder and taller and shinier and more intense and while I’m not sure if this really applies to your average straphanger commuting from walk-up to cubicle and back again everyday, I am absolutely certain that it applies to our cheesecakes. (No, the other kind, silly.) How is a New York Cheesecake unlike any other cheesecake? To begin, it’s very very tall. Most cheesecakes — like my Bourbon Pumpkin, Cappuccino Fudge, Key Lime and a Brownie Mosaic riff — use 3 bricks of cream cheese; this uses 5. This is where I come in, with your ticket to Big Apple bliss, but better because it is can (and also roving crazies that crack up at jokes they imagine in their heads) -free, in your kitchen.

Beautiful Cupcakes I first want to thank everyone for such a wonderful first year of blogging! I started blogging last February and would never have thought that blogging would have impacted my life so much. I absolutely love sharing my passion with everyone in the world and all of you have been so nice and encouraging along the way. I have taken a look at this last year’s posts and tallied up the numbers, so here are the top ten posts of the year…hope you enjoy them! #1 – Chocolate Dipped Tuxedo & Wedding Dress Strawberries #2 - Peanut Butter Balls Cheesecake in a Jar Recipe I’m fairly certain that I’ve discussed my lack of love for the great outdoors, so it’s safe to say you’ll never hear me writing about long hikes in the woods or camping anywhere other than on a deck chair at a five star resort (Hey, I can dream, right?). Not to say that I am not fond of the fresh air and scenery, I just like to keep a screen between me and the bugs. Needless to say, I don’t last long at picnics in the park or anywhere outdoors for that matter. Usually an annoying fly or buzzing bee will send me into a fit within 20 minutes and I’ll sit there contemplating my escape route or the idea of eating in my air conditioned vehicle. Problem is, I am a big pan of picnic food.

Perfect Cheesecake Recipe Prepare the crust 1 Prepare the springform pan so that no water leaks into it while cooking. Place a large 18-inch by 18-inch square of heavy duty aluminum foil on a flat surface. Place the springform pan in the middle of the foil. Gently fold up the sides of the foil around the pan. Make sure to do this gently so that you don't create any holes in the foil. Dinner Tonight: Spicy, Sweet and Vinegary Noodles (Bibim Guksu) [Photograph: Nick Kindelsperger] When I dream of kimchi I think of great bowls of pork-laden stew and excessively large tables of Korean barbecue, which comfort me during the depths of winter. But as we're heading into spring, I wanted something that wouldn't make me think of three feet of snow, but a nice 70 degree day. Essentially, I'd need a cold dish that would embrace kimchi's acidity above all else.

strawberry summer cake It is not summer yet. In fact, it’s been raining for more than a week, and another week — the one in which I presume we’ll be introduced to our new mosquito overlords — is promised. In fact, it was so cold that I met a friend for lunch today and had to wear both a light wool sweater and a jacket. It’s almost like summer looked at New York City and said “pbbbblt!” But I know it’s coming. cream cheese pound cake + strawberry coulis Meet my new favorite pound cake. I have had this cake bookmarked for, oh, 100 years or so and while some recipes that I unearth from their 100-year queue are the kinds of disappointments that did not improve with age, this is of the opposite variety: Why did it take me so long to make this? Here, let me kick myself a few times. How To Make Lasagna Home Hacks This recipe is a hybrid of a full-on, totally from scratch lasagna recipe and one that uses pre-made components. I do make my own sauce and cook the meat, but I use dried pasta instead of fresh, homemade pasta. You can definitely make lasagna quicker than this, if you use jarred sauce.

two-ingredient maple soufflé I know, I know. You read that post title and thought to yourself, Katy is clearly messing with us this morning. And then you thought, Seriously, Katy? You got us all excited for what is obviously some kind of very cruel joke, because who on this planet can craft a soufflé out of two ingredients? Well, I can. And I thought I’d share the recipe with you, but if you’re going to be like that, I’ve changed my mind.