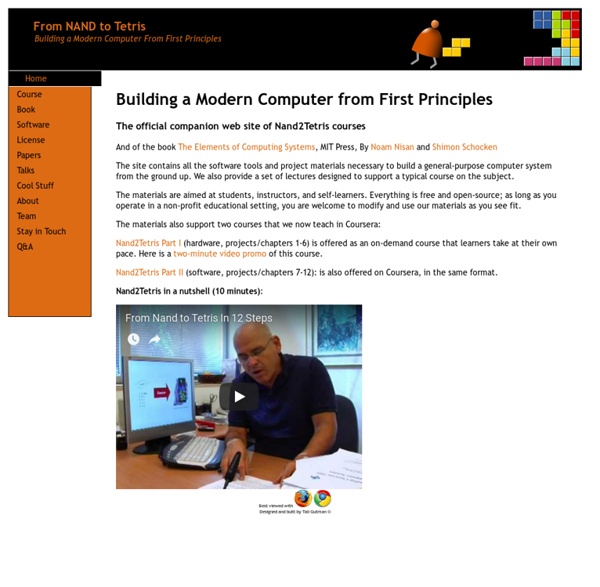 From Sand to Processor or How a CPU is made - Intel It is hard to believe that a modern processor (CPU) is the most complex product in the world. What is so complex in this piece of metal? In this article I will try to explain how a modern processer (CPU) is made from the sand. Processor Manufacturing It takes about $ 5 billion dollars to build a processor manufacturing factory. This factory approximately has 4 years to return the invested funds in its technology, before it will start making the profit. The process of processor manufacturing looks like this: the special equipment is used to grow a mono-crystal of cylindrical shape from the molten silicon. Some Chemistry Lessons Let us take a closer look at the whole process of manufacturing. Originally, it is taken in the form of SiO2 sand, which is in arc furnaces (at the temperature about 1800 ° C) reduced by coke: SiO2 + 2C = Si + 2CO This silicon is called a "technical" and has a purity of 98-99.9%. 3SiCl4 + 2H2 + Si ↔ 4SiHCl3 Photolithography Photo Resist Application More Exposing Etching

sans titre Khan Academy Make a game on Raspberry Pi UPDATE: Here’s the original code for PiPong In this tutorial we’re going to be remaking the classic game, Pong. To do this, we’ll be using a Python module called Pygame. Pygame is great, because it allows the programmer to create 2D games without having to worry about things such as rendering the graphics in too much detail. The main portion of the code will be the code that makes up the game’s structure and logic. Pong is an ideal game to introduce the principles behind game development as it is fairly simple, which makes it much easier to understand what’s going on. Step 1 The first step, of course, is to start up our development environment, which is the Geany editor, and create a new Python file using the ‘with template’ option. Step 2 As usual, we’re going to add some comments to the start of our program to help out anyone (including ourselves) who might end up using it. Step 3 You’ll want to save your file inside a new folder for the project, which we’re cleverly naming PiPong.

memo Apps for Homeschooling - App Reviews, App News, and the Best Apps for Your Homeschool Internal vs External Linux shell commands Share this post It is our firm belief that Linux, despite its advances on the desktop side, as well as on tablets, should be taught starting with the command line. That's because it's an operating system that borrows heavily from Unix(TM), and there was nothing more than a text interface on it at the very beginning. Studies have shown that, if applicable, one is more efficient on the command-line rather than using a graphical user interface (GUI). "If applicable" means that we're not referring at photo/video editing or some other task that requires a graphical environment. It means that when there is a task that can be solved either via the command line interface (CLI) or via GUI, the CLI way is more efficient. You may be puzzled by this choice of words, and with good reason. Please make sure that you have a shell ready, either in a pure console environment or in a GUI, as our web pages are written with text-only friendliness in mind. $ echo $SHELL Let's see what external commands are.

Setting up OpenSSH Server on Windows 10 Anniversary Update | The Sarth Repository Microsoft has finally landed its anniversary update for Windows 10. Among all the random useless features, is an actual Ubuntu Linux subsystem within Windows, with the ridiculously silly name “Bash on Ubuntu on Windows”. Goodbye Cygwin? One of the first things I wanted to try was to setup the SSH server, so I can remote-login from my real box. Getting one up was actually fairly easy, if you can deal with a few problems with weird, weird red-herring error messages. The problem To recap, installing the OpenSSH server is as easy as popping open a bash shell (I assume you figured out how to get the Linux subsystem installed already and popped open Ubuntu ) sudo apt-get install openssh-server If you try to now start the server with sudo service ssh start It’ll respond with initctl: Unable to connect to Upstart: Failed to connect to socket /com/ubuntu/upstart: Connection refused but subsequently Starting OpenBSD Secure Shell server sshd [OK] Diagnosis There are multiple underlying problems here.

Skolburken Learning the shell. Why do you need to learn the command line anyway? Well, let me tell you a story. Many years ago we had a problem where I worked. There was a shared drive on one of our file servers that kept getting full. I won't mention that this legacy operating system did not support user quotas; that's another story. But the server kept getting full and it stopped people from working. du -s * | sort -nr > $HOME/user_space_report.txt Graphical user interfaces (GUIs) are helpful for many tasks, but they are not good for all tasks. I once heard an author say that when you are a child you use a computer by looking at the pictures.

Jupyter Notebook Tutorial: The Definitive Guide (Article) As a web application in which you can create and share documents that contain live code, equations, visualizations as well as text, the Jupyter Notebook is one of the ideal tools to help you to gain the data science skills you need. A basic overview of the Jupyter Notebook App and its components, The history of Jupyter Project to show how it's connected to IPython, An overview of the three most popular ways to run your notebooks: with the help of a Python distribution, with pip or in a Docker container, A practical introduction to the components that were covered in the first section, complete with examples of Pandas DataFrames, an explanation on how to make your notebook documents magical, and answers to frequently asked questions, such as "How to toggle between Python 2 and 3?", and The best practices and tips that will help you to make your notebook an added value to any data science project! (To practice pandas dataframes in Python, try this course on Pandas foundations.) %lsmagic ? !