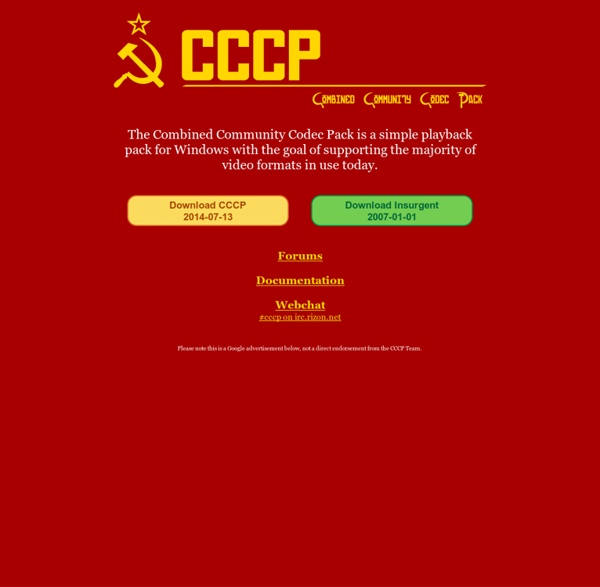 Related:  Free software that can be worth having.

nugget Knowing of no curl-like tools that directly leverage the native Windows API, I thought it would be fun to make my own, and throw in quick automatic VirusTotal lookups for downloaded executables, for good measure. And of course, as I hate bloatware with a passion, I wanted to make something really small but with a few unique features. Some time later, nugget was born. :) PowerDVD 12 Ultra v12.0.1514.54 by COREADHDerbyDWNLD Combo 09 - Download The Best Stuff On The Net With over a 100 million copies sold annually, PowerDVD is the number one choice for media entertainment on PCs and the only player software you need for all your media content and entertainment devices. PowerDVD 12 plays all types of media content - movies, videos, photos and music, and brings the best in video and audio technologies to upgrade all your viewing experience to HD and 3D,

-[Java offline downloads]- Recommended Version 8 Update 121 Release date January 17, 2017 Select the file according to your operating system from the list below to get the latest Java for your computer. By downloading Java you acknowledge that you have read and accepted the terms of the end user license agreement <p><span class="termhighlight">In order to optimize your experience and provide you with accurate messages, please enable javascript in your browser for the duration of your Java installation.

Alcohol 120% 2.0.2.3931 Final RetailDWNLD Combo 09 - Download The Best Stuff On The Net Alcohol brings new meaning to the word multimedia! It is without a doubt a leader in its class, bringing the ability to emulate and record CDs and DVDs together into one amazingly easy to use software program. Now includes Alcohol Xtra. A unique Pre-Mastering function. Using the latest technology the program is constantly being developed and improved to add new features, allowing it to maintain it's position as a leading software package.

Flash Player Pro v5.1-LAXiTYDWNLD Combo 09 - Download The Best Stuff On The Net Flash Player Pro is a handy flash tool kit designed as Adobe flash player and manager . It has several powerful flash tools: download flash movies from the Internet, preview and browse flash movie, capture flash image and set it as wallpaper, create flash screensaver with ease, make conversion between SWF and EXE flash movies etc. All of these features will help you enhance and extend the using possibility of existing flash files. Harder Than It Looks: How to Make a Great Stop Motion Animation Ever find yourself watching a great little stop motion animation and thinking, “Hey, I could do that?” What’s that? You made one with some friends in middle school?

more cult movies It’s midnight somewhere. “Cult movie” is a hard thing to pin down. For the purposes of this list — celebrating the tenth anniversary of Donnie Darko — we’ve put a premium on the intensity and selectiveness of a movie’s appeal. We’ve also limited each director to one film. TMonitor CPUID - System & hardware benchmark, monitoring, reporting What is TMonitor TMonitor is aimed to display the active clock of each individual core of Intel Core 2 and Core i3/i5/i7, as well as AMD K10 processors. A very high refresh rate (20 times per second) allows to visualize the smallest clock variation in real time. TMonitor is able to detect mechanism such as Intel Turbo boost, and therefore allows to clearly visualize its effect as the processor is working. ^ back on top ^

Related:
Related:  Free software that can be worth having.   -  WORTH READING   -  worth thinking about   -  having guests over   -  PeerBlock – Peerblock Site   -  Conscious Entities   -  Codec Guide: K-Lite Codec Pack - For Windows 10 / 8.1 / 7 / Vista / XP   -  Adobe Flash Player Download   -  Bob Thurman: We can be Buddhas | Video on TED.com   -  Belarc Advisor - Free Personal PC Audit, for software, hardware and security configuration information on your computer. Software license management, IT asset management, cyber security audits, and more.   -  Settings Manager - Global Privacy Settings Panel   -  One red paperclip - Wikipedia, the free encyclopedia   -  7-Zip | SourceForge.net   -  UNLOCKER 1.9.2 BY CEDRICK 'NITCH' COLLOMB   -  Annie Murphy Paul: What we learn before we're born | Video on TED.com   -  CCEnhancer - SingularLabs   -  Garth Lenz: The true cost of oil | Video on TED.com   -  Neil MacGregor: 2600 years of history in one object | Video on TED.com   -  Bryan Stevenson: We need to talk about an injustice | Video on TED.com   -  Questions no one knows the answers to | Video on TED.com   -  Deep ocean mysteries and wonders | Video on TED.com   -  Marco Tempest: A magical tale (with augmented reality) | Video on TED.com   -  Tal Golesworthy: How I repaired my own heart | Video on TED.com   -  Brian Greene: Is our universe the only universe? | Video on TED.com   -  Rufus - Create bootable USB drives the easy way   -  Top 10 Clever Hacks for Things You Thought Were Trash   -  Boaz Almog “levitates” a superconductor | Video on TED.com   -  5 Ways to Trick Your Body Into Being More Awesome   -  The Awakening   -  Lisa Kristine: Photos that bear witness to modern slavery | Video on TED.com   -  Types of Skills Everyone Should Know &#150; Video &#150; Top 100 Important Skills - Popular Mechanics   -  Graham Hancock - The War on Consciousness BANNED TED TALK - YouTube   -  Out of Sight, Out of Mind: A visualization of drone strikes in Pakistan since 2004   -  A Day at the Park - Comics that say something. - Quora   -  How To Keep A Clean House - 20 Minutes A Day   -  The 6 types of Questions your Students Need to Know about ~ Educational Technology and Mobile Learning   -  Watch A Student Totally Nail Something About Women That I've Been Trying To Articulate For 37 Years   -  Java Downloads for All Operating Systems   -  Welcome to Forbes   -  The Young Turks