The Neurochemistry of Empathy, Storytelling, and the Dramatic Arc, Animated 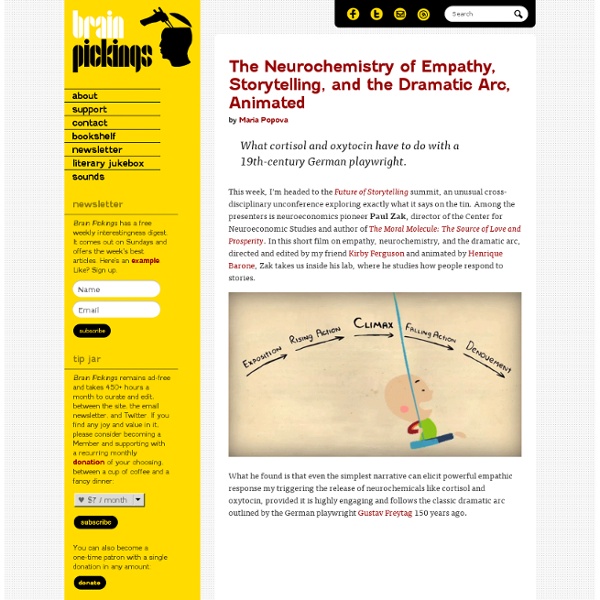 This Is Your Brain on Love | Brain Pickings The best time to drink coffee according to science I came across this interesting article by Steven Miller Ph.D.and I decided to create this post based on what he suggested in his article. Thank you for your wicked awesome observations, Steve! There's also a pretty good writeup on Forbes with Q&A regarding shift workers and why the best time to drink coffee may not necessarily be in the morning. link. Sources: Gizmodo, NeuroscienceDC, Dailynews If you donate $5+, I'll send you this refrigerator magnet as a little thank you gift. Brain & Cognition • Brain Plasticity Is A Critical Part of Learning And Relearning

Neurolinguistics: Language and biology Neurolinguistics: Language and biology Central Nervous System Peripheral Nervous System basic cellular unit (chemical transmission, neurotransmitters dopamine, serotonin, acetylcholine) 1. Neurology: the science and medicine of the brain (related to neuron = brain cell). Neuroscience: just the science part of neurology, plus (sometimes) the study of artificial neural networks (i.e. connectionism). Neuropsychology: a branch of neurology that deals with the connections between the brain and behavior, using cognitive psychological models. Neurolinguistics: a branch of neuropsychology that deals with language. The major parts are: Cerebellum: the little brain near the back Cerebrum: the famous part of the brain. All vertebrates have this characteristic. More about the cortex: Not everything happens in this cortical system; there are also subcortical connections: neural pathways that lead directly from one part of the cortex to another (like a "secret passage"). Cortical wrinkles: terminology: 2. 3.