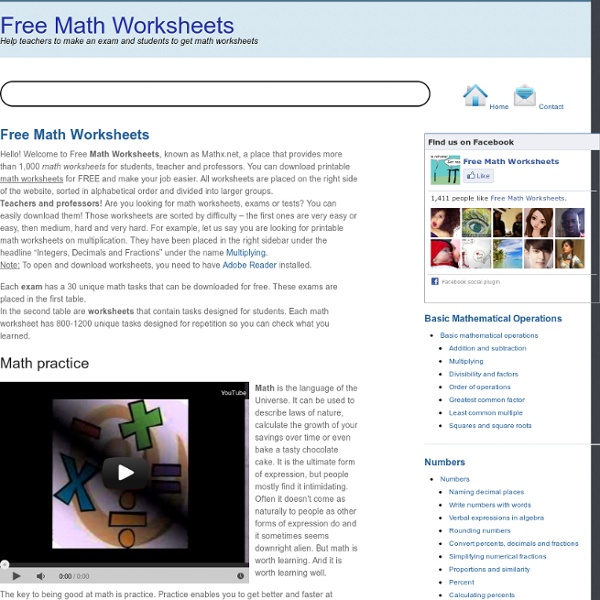 Yummy Math Great Math Links Why Use Technology in the Classroom? Technology, when used appropriately, can help make science classroom a site of active learning and critical thinking, furthering student inquiry and connections with the materials. Teachers can use technology to enable students to explore fundamental curriculum issues and answer core questions. There are scores of educators and researchers deeply concerned with how our schools, largely the product of 19th century industrial society, are going to prepare students for the 21st century. General Math Resources Mathematics Assessment Resource Service (MARS) Toolkit Malcolm Swan, part of the MARS team, is one of the premier task-designers in the math education community. Illuminations Designed by the NCTM specifically as a unified resource for math teachers, Illuminations provides 100+ activities aligning with common core standards, 600+ hands-on lesson plans, a review of standards, and hundreds of online web links and resources to find out more. Math Blogs

Three Acts Of A Mathematical Story 2016 Aug 6. Here is video of this task structure implemented with elementary students. 2013 May 14. 2013 Apr 12. Storytelling gives us a framework for certain mathematical tasks that is both prescriptive enough to be useful and flexible enough to be usable. Act One Introduce the central conflict of your story/task clearly, visually, viscerally, using as few words as possible. With Jaws your first act looks something like this: The visual is clear. With math, your first act looks something like this: The visual is clear. Leave no one out of your first act. Act Two The protagonist/student overcomes obstacles, looks for resources, and develops new tools. Before he resolves his largest conflict, Luke Skywalker resolves a lot of smaller ones — find a pilot, find a ship, find the princess, get the Death Star plans back to the Rebellion, etc. So it is with your second act. What tools do they have already? Act Three Resolve the conflict and set up a sequel/extension. That’s a resolution right there.