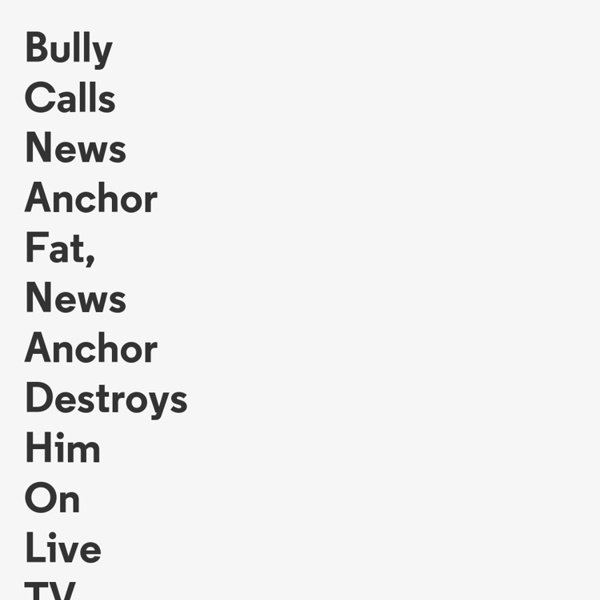 I want to take a moment to address a situation that has become a talking point in this community over the past weekend, especially on Facebook, that centers around me. On Friday, I received the following email from a La Crosse [SP] man with the subject line "Community Responsibility" and it reads as follows: "Hi, Jennifer. It's unusual that I see your morning show, but I did so for a very short time today. I was surprised, indeed, to witness that your physical condition hasn't improved for many years. Surely you don't consider yourself a suitable example for this community's young people, girls in particular. Now, those of us in the media, we get a healthy dose of critiques from our viewers throughout the year, and we realize that it comes with having a job in the public eye. Now we're going to have more on that in just a second, but first, the truth is I am overweight. Here is where I want all of us to learn something from this. I leave you with this. We'll be right back.

Use of ADHD drugs 'increases by 50% in six years' 13 August 2013Last updated at 04:24 ET Common symptoms of ADHD include inattentiveness, hyperactivity and impulsiveness There has been a 50% rise in England in the use of drugs for attention deficit hyperactivity disorder in six years. NHS prescriptions for methylphenidate drugs, including Ritalin, rose from 420,000 in 2007 to 657,000 last year, the Care Quality Commission said.

5-Year Old Girl Models Real Female Heroes For Mother's Photo Shoot (IMAGES) It’s your five-year-old daughter’s birthday. You’re a photographer and you want to take some fun photos of her for the day – maybe in some dress-up. What’s the first thing that comes to mind? Gymtimidation -Anti-Diet Project Gym Self-Consciousness I am an adult. I pay taxes. I vacuum, sometimes. I buy the fancy toothpaste. Leading Men Age, But Their Love Interests Don’t Yesterday, Kristen Stewart fell out of the con-artist comedy Focus after Will Smith replaced Ben Affleck as the male lead; according to Variety, she was nagged by "the feeling that the age difference between the two would be too large a gap." For the record, Smith is a mere four years older than the 40-year-old Affleck, and if it seems a little odd that either of them would be considered a romantic partner for the 23-year-old Stewart in the first place … well, welcome to Hollywood. It seems like time and time again, male movie stars are allowed to age into their forties, fifties, and even sixties while the ages of their female love interests remain firmly on one side of the big 4-0, but is this a perception borne out of reality? To find out for sure, Vulture has analyzed the data of ten middle-aged leading men and the ages of the women they've wooed onscreen; you'll see the results in the charts below.

10 Symptoms of Asperger’s Syndrome: Know the Signs Asperger’s syndrome is part of the autism spectrum disorder, also known as ASD. According to medical experts, it is a mild form of autism and generally manifests without extreme mental disabilities. The main outward characteristics of a person with Asperger’s syndrome are poor social skills, lacking nonverbal communication, and being clumsy. Feel Amazing in your Fat, Naked Body  This post is going to make some cringe and revolt -- and that's fine, because a special message needs to be heard more often today: Your body isn't gross or vile, it's simply different than someone else's. Times that by seven billion. But none of this matters if YOU don't think your body is worth staring at naked in your mirror, if you're overcome with judgments about what your size means. Unfortunately, many women avoid engaging with their bodies in this direct way, unable to make contact with their own image staring back at them.

Antibiotic Resistance eedwood House Farm is easy to miss. Only a small sign - the bright pink image of a pig - suspended from a fence post hints at anything of significance down the one-way track that leads off the main road. After a few hundred metres of bouncing over mud and gravel, it is the pungent smell that smacks you first. Then, the sound; the squealing, grunting and growls of 5,000 pigs crammed into this corner of rural Staffordshire. A hundred or so piglets are excitedly clambering over each other or snuffling around the muddy floor of the gated outdoor enclosure where they are waiting to be transported for slaughter. Inside the great barns, 500 sows lie side-by-side in pens while their offspring fight for space at their teats.The air hangs heavy with ammonia, so thick it stings the lungs.

Real or Perceived Attacks on Self Esteem. The Four Rooms Introduction Our work with people takes us to some interesting places and over the last couple of days I’ve been checking out some ideas and observations in the context of Transactional Analysis. As is often the case, some tangential work sprang to mind and here it is-an easily digestible metaphor for how we stay in touch with (or otherwise) those feelings and beliefs that nurture or attack our self-esteem. Self Esteem might be described as “the way we think about ourselves” and there can be a number of pulls on our self-esteem, sometimes in opposing directions. The human capacity for listening to negative messages is truly alarming and too often these are the ones we hear, think about and use as evidence to justify a low self opinion. They also give “permission” for others to adapt a negative view of us, thereby reinforcing our poor self-appraisal.

Positive and Negative Teenage Body Image Body image is multi-faceted. It includes how you perceive your appearance when you look in the mirror. It also involves how you feel about your body. People with negative body image see themselves as a distorted image of who they really are.