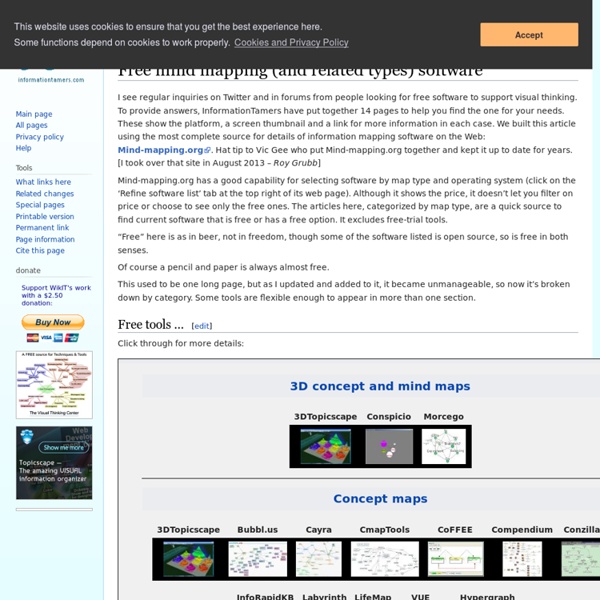 I see regular inquiries on Twitter and in forums from people looking for free software to support visual thinking. To provide answers, InformationTamers have put together 14 pages to help you find the one for your needs. These show the platform, a screen thumbnail and a link for more information in each case. We built this article using the most complete source for details of information mapping software on the Web: Mind-mapping.org. Hat tip to Vic Gee who put Mind-mapping.org together and kept it up to date for years. [I took over that site in August 2013 - Roy Grubb] Mind-mapping.org has a good capability for selecting software by map type and operating system (click on the 'Refine software list' tab at the top right of its web page). "Free" here is as in beer, not in freedom, though some of the software listed is open source, so is free in both senses. Of course a pencil and paper is always almost free. Click through for more details:

15 common mind map elements Jul 3rd, 2012 | By Chuck Frey | Category: Resources If you’re new to the world of mind mapping software, you may not realize all of the types of content you can include in a software-produced visual map. So I created a mind map to summarize what’s possible. Please click on the image above to load a much larger version of this map, with branches expanded to explain what each type of mind map content is, and how you can use it. I hope you find this to be useful to you! If you have anything to add, please do so in the comments area. Wikipedia Concept-mapping and mind-mapping software are used to create diagrams of relationships between concepts, ideas or other pieces of information. It has been suggested that the mind mapping technique can improve learning/study efficiency up to 15% over conventional note taking.[1] There are a number of software packages and websites that allow the creation of, or otherwise support mind maps. File format[edit] Using a standard file format allows interchange of files between various programs.

Animaps - Create Animated Google Maps Animaps is a new service that was built for the purpose of allowing users to create animated Google Maps. The basics of creating maps in Animaps is very similar the process for creating maps in Google Maps. The main benefit of using Animaps over Google Maps is that you can create a tour of your placemarks that plays through according to the timing that you specify. Another benefit is that you can build in colored shapes to expand and contract to demonstrate patterns. You can also import images to your map from Flickr, Picassa, and Facebook. Click here to watch a demonstration of Animaps in action.

Press Space or double-click to edit Capture ideas at the speed of thought – using a mind map maker designed to help you focus on your ideas and remove all the distractions while mindmapping. Create unlimited mind maps for free, and store them in the cloud. Your mind maps are available everywhere, instantly, from any device. Brainstorm, create presentations and document outlines with mind maps, and publish your ideas online and to social networks. Get Started

Dzinepress (Top 40) [ad#link-unit-post]Mind Mapping Applications working as powerful in this era for taking notes, capturing ideas, represent words, exploring concepts or other items linked to and arranged around a central key word or idea. Mind maps are used to generate, visualize, structure and as an aid in study, organization, problem solving, decision making, and writing. Mind Mapping Tools helps in many way of work in this growing and emerging industry, you can use it to study for a big exam, you can use it brainstorm new article ideas as bloggers work, or flesh out what needs to be covered in the business plan for a new venture, you can organize a big move of house, Iâ€™ve seen people use the mind map format for their daily to-do lists too. Hope you all respected visitors and readers like very much and share your views about this article for encouragement. Bubbl.us A flash based brainstorming tool that you can share with others and also embed in to your site.

45+ Free Online Tools To Create Charts, Diagrams And Flowcharts Charts and graphs are the best ways to represent information and relationship between two interlinked entities. Not only do charts and graphs inform visitors about the trend or relationship you want to show them but also add a visual connection with the visitors. Several online tools are available that help you create comprehensively designed flowcharts and graphs that worth a thousands words. Check them out and let us know what you feel about these tools. Southbeach notation This article originally appeared in Wikipedia, but was deleted because it was judged not to meet Wikipedia notability standards. It describes a useful visual thinking tool, however, and is therefore reproduced in WikIT, which originally had a brief mention of it. Southbeach Notation is a visual modeling language for situation improvement[1] and is one of an increasing number of methods used around the world for intensifying innovation.[2] It is derived from and extends TRIZ notations for inventive problem solving.[3] Models are created in the form of diagrams similar to Cause-effect graphs that show the different parts of a system (Agents) as red blocks if they are considered harmful and green blocks if they are considered useful. Organizations known to be using Southbeach include CSC, BearingPoint UK, Intel and ShapingTomorrow. Overview

Write Better: 3 Ways To Introduce Your Main CharacterWritersDigest.com One of the biggest bugaboos in manuscript submissions is when the author doesn’t properly introduce the protagonist within the first chapter. Readers want to know quickly the protagonist’s sex, age and level of sophistication in the world of the story, and they want to relate to the character on an emotional level. Readers’ interest in the protagonist has to be earned, in other words. If we like a character, then we want to see her do well and we’re willing to follow her around and invest our time and interest in rooting her on in her struggle.

Visual Thinking Evolution A mind map is a diagram used to represent words, ideas, tasks, or other items linked to and arranged around a central key word or idea. Especially in British English, the terms spidergram and spidergraph are more common,[1] but they can cause confusion with the term spider diagram used in mathematics and logic. Mind maps are used to generate, visualize, structure, and classify ideas, and as an aid to studying and organizing information, solving problems, making decisions, and writing.

College Degree (99 apps) So, there you are staring at that black sheet of paper again. Or perhaps it's a black Word document on your computer screen. Whichever it may be, it's obvious you're about to take notes for that big essay assignment or group project, and you're not too excited about getting started! That's where a different kind of note taking comes in to play, one that is actually fun to do and will also help you to understand your notes better.

10 Free Tools for Everyday Research - Getting Smart by Susan Oxnevad - @soxnevad Why do so many students choose Wikipedia when asked to find information on the Internet? I believe the answer is that Wikipedia is like the McDonalds of the Internet, you can always find it and you know what you’re going to get. Quite frankly, I like Wikipedia because it provides students with a starting point for research and I am particularly fond of the way I’ve seen so many students develop their own method of research by using the links at the bottom to find more information. As educators we are faced with the challenge of teaching students to efficiently use the Internet to find and use information.