Religion May Cause Brain Atrophy 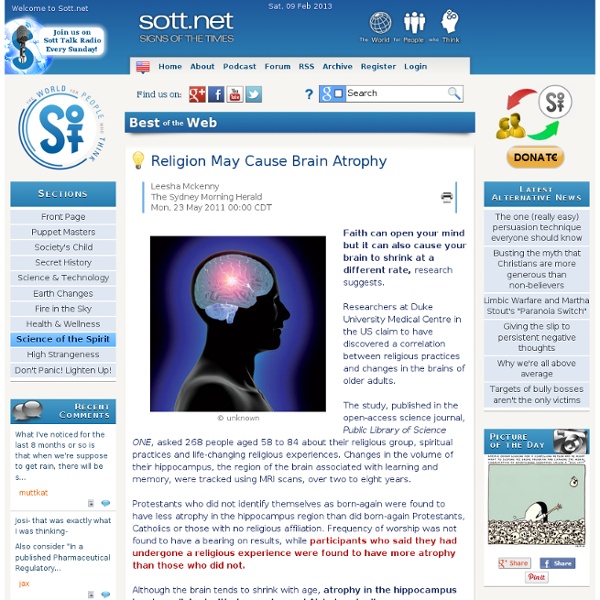 Faith can open your mind but it can also cause your brain to shrink at a different rate, research suggests. Researchers at Duke University Medical Centre in the US claim to have discovered a correlation between religious practices and changes in the brains of older adults. The study, published in the open-access science journal, Public Library of Science ONE, asked 268 people aged 58 to 84 about their religious group, spiritual practices and life-changing religious experiences. Changes in the volume of their hippocampus, the region of the brain associated with learning and memory, were tracked using MRI scans, over two to eight years. Protestants who did not identify themselves as born-again were found to have less atrophy in the hippocampus region than did born-again Protestants, Catholics or those with no religious affiliation. Although the brain tends to shrink with age, atrophy in the hippocampus has been linked with depression and Alzheimer's disease. Related:  `test 1016

Women's exercise linked to lower cognitive skill - health - 07 January 2011 WOMEN who habitually take strenuous exercise might be at risk of damaging their cognitive function later in life. Strenuous exercise is known to reduce oestrogen levels in women and girls. This can delay the start of menstruation, and can lead to irregular periods in adult women. Low levels of oestrogen in premenopausal women have been linked to impaired mental function in later life. Mary Tierney at the University of Toronto, Canada, reasoned that strenuous exercise might therefore lead to impaired cognition in later life. The overall benefits of regular exercise are well established, but Tierney says the possible impact of strenuous exercise on cognition should be investigated further to see if it is significant.

SCHOPENHAUER'S 38 STRATAGEMS, OR 38 WAYS TO WIN AN ARGUMENT Arthur Schopenhauer (1788-1860), was a brilliant German philosopher. These 38 Stratagems are excerpts from "The Art of Controversy", first translated into English and published in 1896. Carry your opponent's proposition beyond its natural limits; exaggerate it. The more general your opponent's statement becomes, the more objections you can find against it. The more restricted and narrow his or her propositions remain, the easier they are to defend by him or her. (abstracted from the book:Numerical Lists You Never Knew or Once Knew and Probably Forget, by: John Boswell and Dan Starer) Time on the Brain: How You Are Always Living In the Past, and Other Quirks of Perception I always knew we humans have a rather tenuous grip on the concept of time, but I never realized quite how tenuous it was until a couple of weeks ago, when I attended a conference on the nature of time organized by the Foundational Questions Institute. This meeting, even more than FQXi’s previous efforts, was a mashup of different disciplines: fundamental physics, philosophy, neuroscience, complexity theory. Crossing academic disciplines may be overrated, as physicist-blogger Sabine Hossenfelder has pointed out, but it sure is fun. Like Sabine, I spend my days thinking about planets, dark matter, black holes—they have become mundane to me. But brains—now there’s something exotic. So I sat rapt during the neuroscientists’ talks as they described how our minds perceive the past, present, and future. McDermott outlined the case of Patient K.C., who has even worse amnesia than the better-known H.M. on whom the film Memento was based. Alas, they couldn’t.

uld a mind-reading machine soon be a reality? Scientists 'decode' human brainwaves By Daily Mail Reporter Updated: 08:37 GMT, 18 May 2011 A 'mind-reading machine' that can display mental images is a step closer after scientists decoded brain signals related to vision, it was claimed today. Researchers from the University of Glasgow showed six volunteers images of people's faces displaying different emotions such as happiness, fear and surprise. In a series of trials, parts of the images were randomly covered so that, for example, only the eyes or mouth were visible. Nowhere to hide: A 'mind-reading machine' that displays mental images is a step closer after scientists said they have decoded brain signals related to vision Participants were then asked to identify the emotion being displayed while electrodes attached to the scalp measured the volunteers' brainwaves. The scientists were able to show that brainwaves varied greatly according to which part of the face was being looked at. 'What we have done is to find a way of decoding brainwaves to identify the messages within.'

How Brain Imaging Could Help Predict Alzheimer's Developing drugs that effectively slow the course of Alzheimer’s disease has been notoriously difficult. Scientists and drug developers believe that a large part of the problem is that they are testing these drugs too late in the progression of the disease, when significant damage to the brain makes intervention much more difficult. “Drugs like Lilly’s gamma secretase inhibitor failed because they were tested in the wrong group of patients,” says Sangram Sisodia, director of the Center for Molecular Neurobiology at the University of Chicago. People in the mid or late stages of the disease “are too far gone, there is nothing you can do.” New brain imaging research may help solve that problem. “Brain changes that predict progression will hopefully allow us to detect the disease early, before it has caused irreversible damage,” said Sarah Madsen, a graduate student at the University of California, Los Angeles, at a press briefing at the conference.

Eye Direction and Lying - How to detect lies from the direction of an individual's gaze / visual accessing cues. Interesting Info -> Lying Index -> Eye Direction & Visual Accessing Cues Eye Movement and Direction & How it Can Reveal Truth or Lies This is a continuation of our previous article Detecting Lies. Many comments by our visitors asked about how eye direction can indicate the presence of a lie. Can the direction a person's eyes reveal whether or not they are making a truthful statement? In these shows a detective will deduce if a person is being untruthful simply because they looked to the left or right while making a statement. In reality, it would be foolish to make such a snap judgment without further investigation... but the technique does have some merit. So, here it is... read, ponder and test it on your friends and family to see how reliable it is for yourself. Visual Accessing Cues - "Lying Eyes" When asked a question a "normally organized" right-handed person looks (from your viewpoint, looking at them): The Gist of it... How this information is used to detect lies: Final Notes:

This Is Your Brain On Caffeine Ever miss your daily cup of coffee and subsequently get a pounding headache? According to reports from consumers of coffee and other caffeinated products, caffeine withdrawal is often characterized by a headache, fatigue, feeling less alert, less energetic and experiencing difficulty concentrating. Caffeine withdrawal is at its worst between 24 to 48 hours and lasts up to a week. Researchers from the University of Vermont College of Medicine and Johns Hopkins School of Medicine sought to investigate the biological mechanisms of caffeine withdrawal in a paper published recently in the online edition of the scientific journal Psychopharmacology. The group examined caffeine’s effects in a double-blind study, which involved the administration of caffeine and placebo capsules. Acute caffeine abstinence also produced changes in EEG (increased theta rhythm) that has previously been linked to the common withdrawal symptom of fatigue.

Brain Training, Brain Exercise, Brain Fitness by Brain Training 101 120 Ways to Boost Your Brain Power Here are 120 things you can do starting today to help you think faster, improve memory, comprehend information better and unleash your brain’s full potential. Solve puzzles and brainteasers.Cultivate ambidexterity. Use your non-dominant hand to brush your teeth, comb your hair or use the mouse. Write with both hands simultaneously. Switch hands for knife and fork.Embrace ambiguity. Readers’ Contributions Dance! Contribute your own tip! There are many, many ways to keep our brains sharp.

Brain Workshop - a Dual N-Back game 5 Ways To Hack Your Brain Into Awesomeness Much of the brain is still mysterious to modern science, possibly because modern science itself is using brains to analyze it. There are probably secrets the brain simply doesn't want us to know. But by no means should that stop us from tinkering around in there, using somewhat questionable and possibly dangerous techniques to make our brains do what we want. We can't vouch for any of these, either their effectiveness or safety. All we can say is that they sound awesome, since apparently you can make your brain... #5. So you just picked up the night shift at your local McDonald's, you have class every morning at 8am and you have no idea how you're going to make it through the day without looking like a guy straight out of Dawn of the Dead, minus the blood... hopefully. "SLEEEEEEEEEP... uh... What if we told you there was a way to sleep for little more than two hours a day, and still feel more refreshed than taking a 12-hour siesta on a bed made entirely out of baby kitten fur? Holy Shit!

Sleep, Tetris, Memory and the Brain As part of our ongo­ing Author Speaks Series, we are hon­ored to present today this excel­lent arti­cle by Dr. Shan­non Mof­fett, based on her illu­mi­nat­ing and engag­ing book. Enjoy! (and please go to sleep soon if you are read­ing this late Mon­day night) Two years ago I fin­ished a book on the mind/brain, called The Three Pound Enigma: The Human Brain and the Quest to Unlock its Mys­ter­ies . Fast-forward to the present, when I am a res­i­dent in emer­gency med­i­cine at a busy inner-city trauma cen­ter; I have two-year-old twins and a hus­band with a 60-hour-a-week job of his own. Sleep is so obvi­ous a phys­i­o­logic need (from insects to mam­mals, all ani­mals sleep) that it doesn’t even occur to most of us to won­der why we have to do it—why in the world would we need to lie down, par­a­lyzed, for a third of our lives, with our brains in some sort of auto-pilot chaos?