CSS3 & HTML5 Experiments That Will Blow Your Mind - 47 Examples 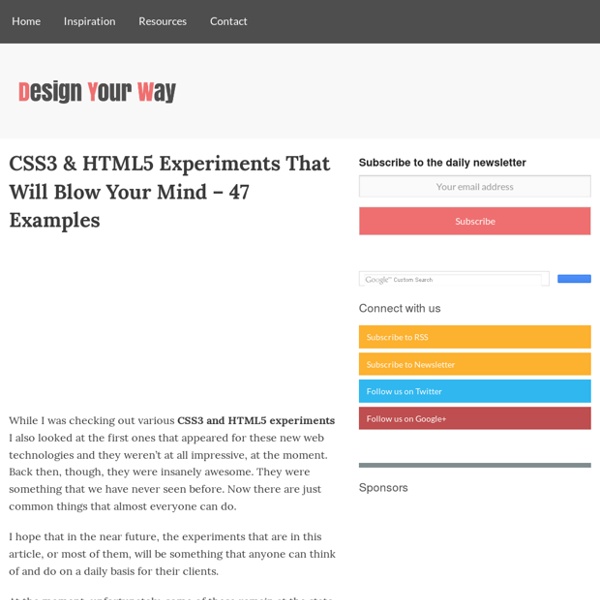 While I was checking out various CSS3 and HTML5 experiments I also looked at the first ones that appeared for these new web technologies and they weren’t at all impressive, at the moment. Back then, though, they were insanely awesome. They were something that we have never seen before. I hope that in the near future, the experiments that are in this article, or most of them, will be something that anyone can think of and do on a daily basis for their clients. At the moment, unfortunately, some of these remain at the state of being called experiments, mostly because they aren’t supported by all the browsers. CSS3D Clouds Madmanimation cubic-bezier Clock Windows7 Start Menus CSS3 animations CSS3 Animation: Why not Zoidberg? Tilt shift text 3D City Every second one hour of video is uploaded to Youtube CSS3 patterns Wave Morphing cubes Experimental CSS3 Animations CSS Zoetrope Homer Animatable DOM Tree Animated Web Banners With CSS3 Typography Rain Animated icons vlog.it Fractals Creative CSS3 Animation Menus

New Technologies and 21st Century Skills How to make a professional logo design, web logo design, internet branding The Golden Arches. The Swoosh. The Shell. You’d think this would be simple and easy to make/design a logo, but it ain’t. FUN & SERIOUS or COOL & SOPHISTICATED… Depending on how you approach it, your logo design will create a mood. There’s a serious danger heading off into one extreme over another when designing logos. That being said: Research is key. First, you should ask your client a bazillion questions. Second, find out their taste. BRANDING vs. That logo you designed is great, but – so what?! In this case, Resume Bear wanted to not only have it on their website, letterhead, and business cards. It also tells us: The Logo Must Be Legible. SEPARATION of BEAR and RESUME… Resume Bear started out with a big, brown, passive bear holding a piece of paper in its mouth as if it just caught a trout. An easy question to ask yourself, as a designer, is What’s The Focus? But how do you make a job seeker, or employer, who just reads the name of the company that Resume Bear is not about camping?