20 rules of formulating knowledge in learning 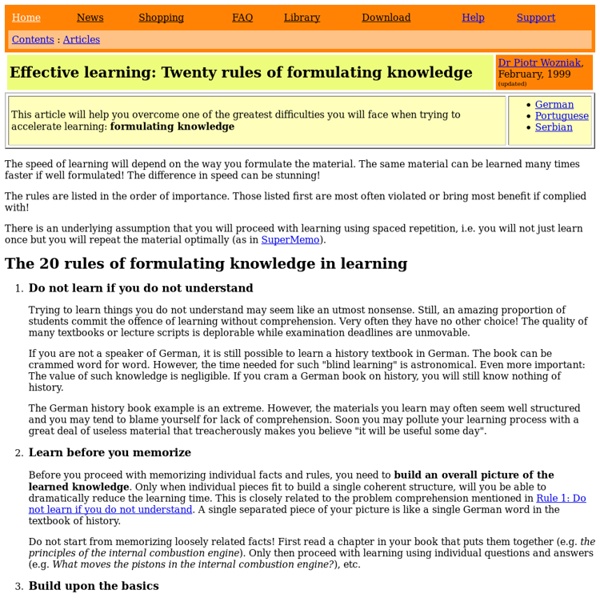 The speed of learning will depend on the way you formulate the material. The same material can be learned many times faster if well formulated! The difference in speed can be stunning! The rules are listed in the order of importance. Those listed first are most often violated or bring most benefit if complied with! There is an underlying assumption that you will proceed with learning using spaced repetition, i.e. you will not just learn once but you will repeat the material optimally (as in SuperMemo).

How to retain 90% of everything you learn Imagine if you had a bucket of water. And every time you attempted to fill the bucket, 90% of the water would leak out instantly. Every time, all you’d retain was a measly 10%. How many times would you keep filling the bucket? Memorizing a programming language using spaced repetition software I've been doing this for a year, and it's the most helpful learning technique I've found in 14 years of computer programming. Background: I'm an intermediate programmer. I didn't go to school for it.

Maximum Likelihood Maximum likelihood, also called the maximum likelihood method, is the procedure of finding the value of one or more parameters for a given statistic which makes the known likelihood distribution a maximum. The maximum likelihood estimate for a parameter is denoted Formula for Human Genius and Creativity High IQ in high demand Intelligence, creativity and genius are generally regarded as highly valuable assets of the human mind. As a strong positive correlation exists between IQ and the median earned income, most people would gladly boost their IQ, improve creativity or accept being called a genius. Exceptions to this rule are few and most revolve around a claim that intelligence may be an obstacle on the way towards universal happiness. Here are a few exemplary arguments against human intelligence listed by the detractors of genius:

100 Amazing How-To Sites to Teach Yourself Anything Posted by Site Administrator in Online Learning May 7th, 2009 Learning new skills and expanding your knowledge doesn’t have to cost you an arm and a leg. There are loads of free resources on the Web that can help you find instructional videos, tutorials and classes to learn a wide variety of skills from fixing basic car problems to speaking another language. With 100 sites to choose from, you’re bound to find something here that will help you learn just about anything you could want. How to never forget anything ever again Two years ago I was having breakfast with a man who was purportedly the most successful Jeopardy contestant ever — behind Ken Jennings (and the Watson supercomputer). As someone who is always interested in learning new things, I wanted to know how he was able to remember so much stuff. “Have you ever heard of spaced repetition?”

Memory strength and its components 1. S/R Model of memory 10 years ago we published a paper that delineated a distinction between the two components of long-term memory: stability and retrievability (Wozniak, Gorzelanczyk, Murakowski, 1995). The paper provided the first outline of the so-called S/R Model that makes it easier to build molecular models of long-term memory. Until now, the stability-retrievability distinction has not made a major impact on research in the field. Here we re-emphasize the importance of the S/R Model and sum up the findings of the last decade that refine the S/R Model and highlight its importance in the deconvolution of seemingly contradictory research in the field of memory and learning.

How to Increase Mind Power It's hard to make up your bed while you're still sleeping in it. Hard to make up your mind for the same reason. ~ Robert Brault Indeed! The fact that most of us use only about a seventh of our total mental faculties is because we never bother to awaken or activate the remaining six parts! How to Remember Like a Pro Most people don't want to be memory athletes, but they would like to remember things more easily and reliably. These techniques can accomplish that. Besides, they're fun. Ancient Greek orators were noted for their ability to give hours-long speeches from memory.

Spaced repetition: research background Repetition spacing in learning was in the center of my research over the last ten years (for review see: Wozniak 1990). In this chapter I would like to familiarize the reader with the concept of the optimum spacing of repetitions that will frequently be referred to throughout the dissertation. Research background