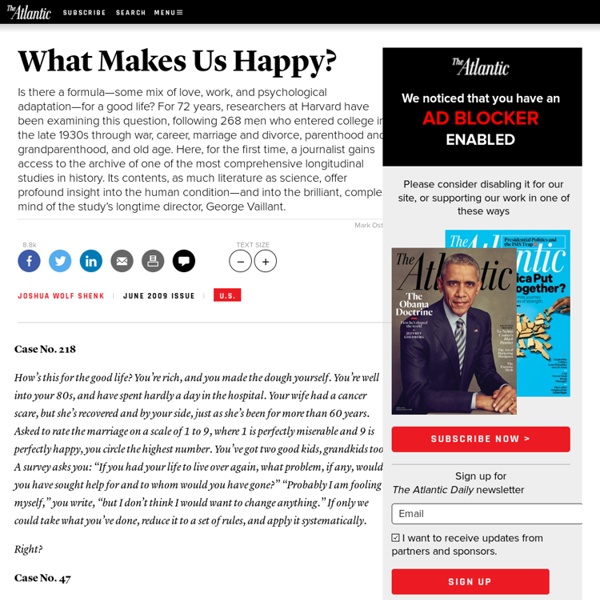 Case No. 218 How’s this for the good life? You’re rich, and you made the dough yourself. You’re well into your 80s, and have spent hardly a day in the hospital. Your wife had a cancer scare, but she’s recovered and by your side, just as she’s been for more than 60 years. Asked to rate the marriage on a scale of 1 to 9, where 1 is perfectly miserable and 9 is perfectly happy, you circle the highest number. Right? Case No. 47 You literally fell down drunk and died. Last fall, I spent about a month in the file room of the Harvard Study of Adult Development, hoping to learn the secrets of the good life. From their days of bull sessions in Cambridge to their active duty in World War II, through marriages and divorces, professional advancement and collapse—and now well into retirement—the men have submitted to regular medical exams, taken psychological tests, returned questionnaires, and sat for interviews. Such bravado had defined the study from the start. It was a far cry from Galileo. Dr. Related:  Resources general • MOOC

Table of Contents - Magazine What Makes Us Happy? An inside look at an unprecedented seven-decade study of a group of Harvard men suggests that one thing, above all, truly makes a difference. Video: Dr. George Vaillant, director of the 72-year study, explains what makes people strive for fame and why dirty laundry can symbolize a perfect life. Interview: Ben Bradlee, former executive editor of The Washington Post, talks about his role in the Harvard study. Interview: Historian Donald Cole, selected to participate in the study in the 1940s, reflects on how it affected his life. Do CEOs Matter? Apple’s stock rises and falls with the faintest rumors about Steve Jobs's health. Hope Floats As the recession blows a gale, the world’s most expensive cruise ship nears completion. Fashion in Dark Times As the ever-frivolous industry enters a new era, customers are thinking more—a prospect that thrills the best designers Jacob’s Ladder Is South Africa's next president a savior, a criminal, a Marxist revolutionary—or all of the above?

Avoid selective hearing with 20 top social media monitoring tool You hear that? … What about that? … Still can’t hear it? Unconvinced? Chances are that if you work for a big brand, your PR agency is listening to what the media and big bloggers say about you. There are painless and time-efficient social media monitoring tools that you and/or your PR agency can use to learn about what people are saying about you. By one count, I’ve read that there are over 100 social media monitoring tools out there. Free tools: BoardTracker: This search facility allows you to effectively search forums and discussion boards. BlogPulse Conversation Tracker: Run by AC Nielsen, this tool allows you to search for a company name and see a threaded view of the conversational graph that emerges. BlogPulse Trend Search: “BlogPulse Trend Search allows you to create graphs that visually track “buzz” over time for certain key words, phrases or links. Google Video: Want to know when someone mentions your name or tag line in a video? Paid apps: Be Sociable, Share!

how-this-harvard-psycholo_n_3727229 What if there was a study dedicated to unearthing the secrets to a happy and purposeful life? It would have to be conducted over the course of many decades, following the lives of real people from childhood until old age, in order to see how they changed and what they learned. And it would probably be too ambitious for anyone to actually undertake. Only, a group of Harvard researchers did undertake it, producing a comprehensive, flesh-and-blood picture of some of life’s fundamental questions: how we grow and change, what we value as time goes on, and what is likely to make us happy and fulfilled. The study, known as the Harvard Grant Study, has some limitations — it didn’t include women, for starters. We spoke to George Vaillant, the Harvard psychiatrist who directed the study from 1972 to 2004 and wrote a book about it, in order to revisit the study’s findings. Love Is Really All That Matters It’s About More than Money and Power Regardless of How We Begin Life, We Can All Become Happier

The Nervous Breakdown I’m wondering if writers in my Generation X age group who contribute their talents to various sites and newspapers, and yet don’t feel like they’re a part of a literary movement, might feel a kinship to this particular piece that I have never shared publicly until now. The Dead Generation is an excerpt from Chapter Nine of ‘Citrus Girl’ (about a third of that chapter). It was written sometime between 1996 and 1998. Could all be drivel. It’s up to you to decide. Part of it was edited by literary historian John Arthur Maynard of CSU Bakersfield who wrote ‘Venice West: The Beat Generation In Southern California.’ It’s 1996 and I’m thinking about Malcolm Cowley, one of the ‘lost’. And now today’s dead generation—lost, but never forever lost and never completely forgotten—where are their slacker rebel origins? In Generation X literature? It could be any city… And Cowley, he wrote that maybe the young writers of his age weren’t young or foolish enough. While married he was bored.

Take Out Your No.2 Pencils: Taking the Stress Out of Standardized Tests American students may be the most tested kids in the world, taking more than 100 million standardized tests every year, according to Teachers College at Columbia University in New York City. The results of these tests are taken very seriously by educators, parents, administrators, and even local government officials, for they are viewed as a measure of teacher and school competence and, in some cases, can affect a child's future placement in a school. "Scores are analyzed to the nth degree and published in newspapers, with banners given to exemplary schools," says Charlotte Sassman, a kindergarten and first-grade teacher in Texas, where youngsters in elementary grades take the TAAS, or Texas Assessment of Academic Skills. "Parents buy and sell houses just to be in the neighborhood with the best test scores!" All this pressure is not lost on children. Ann Brown, a school nurse and health teacher in New Jersey, notes, "It's natural to feel anxiety before you take a test. Involve Parents.

Secret Fears of the Super-Rich The October 2008 issue of SuperYacht World confirmed it: money cannot buy happiness. Page 38 of “the international magazine for superyachts of distinction”—if you have to ask what it takes for a yacht to qualify as “super,” you can’t afford to be in the showroom—presented the Martha Ann, a 230-foot, $125 million boat boasting a crew of 20, a master bedroom the size of my house, and an interior gaudy enough to make Saddam Hussein blush. The feature story on the Martha Ann was published just as the S&P 500 suffered its worst week since 1933, shedding $1.4 trillion over the course of the week, or about 2,240 Martha Anns every day. The lesson that Mammon is a false or inadequate god goes back a long way, and a glossy spread in SuperYacht World is just one place to relearn it. The responses, which run to 500 pages and fill three plastic binders on the fifth floor of Boston College’s McGuinn Hall, constitute what the center’s director, the sociologist Paul G.

10 Photos Capturing Moments of Spontaneous Badassery It's easy to look badass with careful planning: Whether it's entering a prize fight, acting in intense action scenes with the benefit of careful choreography or just waiting for the crowd to gather before you jump your dirt bike over 16 flaming tigers, the common thread is always planning and forethought. It's a lot harder to come off as a total badass in the heat of the moment, with no warning, no setup and no pretense. Hard, but not impossible: Mildly Amused Riot Guy Clearly, there is some serious shit going down in the foreground of this photo: an altercation, an argument, a dramatic scene or a hurried arrest. New in Men's Fashion: Rocket Launchers A good fashion sense is nothing if you don't know how to accessorize. P-probably you. Fake! Yeah, there. Disappointing Fire Tornado Image thanks to Mezrin And here we have an angry old testament God practicing his fireballs. He is, if anything, a bit disappointed. Epic Beard Rescue Squad, Go!

The New Map Of The Brain Trying to map the brain has always been cartography for fools. Most of the other parts of the body reveal their workings with little more than a glance. The heart is self-evidently a pump; the lungs are clearly bellows. But the brain, which does more than any organ, reveals least of all. The 3-lb. lump of wrinkled tissue--with no moving parts, no joints or valves--not only serves as the motherboard for all the body's other systems but also is the seat of your mind, your thoughts, your sense that you exist at all. You have a liver; you have your limbs. The struggle of the mind to fathom the brain it inhabits is the most circular kind of search--the cognitive equivalent of M.C. Modern scientists have done a far better job of things, dividing the brain into multiple, discrete regions with satisfyingly technical names--hypothalamus, caudate nucleus, neocortex--and mapping particular functions to particular sites. Slowly, that is changing.

Casemovies.wordpress.com What Harvard’s Grant Study Reveals about Happiness and Life In 1966, when he was 32, George Vaillant took over Harvard’s famous Grant Study. The task: track hundreds of Harvard men, from youth to death, and determine what predicts wellbeing. Nearly half a century later, Vaillant lays out his final findings, and discovers that his own maturation is inseparable from the lives he examines. In the early 1940s, two Harvard sophomores named Norman Mailer and Leonard Bernstein were rejected for participation in a study. The study, known as the Grant Study, was funded by William T. In his proposal to the university president, Arlen V. Between 1939 and 1946, Bock’s team selected 268 sophomores. Grant withdrew his funding in 1947, and the study sputtered along for the next 20 years. “Some men came to Cambridge to be interviewed, but in most cases I went to them—to Hawaii, Canada, London, New Zealand,” writes the 82 year-old Vaillant in Triumphs of Experience: The Men of the Harvard Grant Study, his final dispatch summing up nearly 50 years of work.

ohnotheydidnt: 15 Books to read before they hit the big screen 15 Books to Read Before They're Adapted For the Screen 1. One Day by David Nicholls * What it's about: A couple of friends who have a one-night stand and then meet on the same day for the next 20 years; the movie was recently cast.* Who's starring: Anne Hathaway and Jim Sturgess. 2. * What it's about: The first book in the Millennium trilogy, the story follows a journalist named Mikael Blomkvist who teams up with a computer hacker named Lisbeth Salander to uncover a family secret surrounding a woman's disappearance. 3. 20 Times a Lady by Karyn Bosnak * What it's about: A woman obsessed with the number of men she's slept with — and finding a soulmate among her past lovers. 4. * What it's about: A Depression-era story of a young man who joins a circus and witnesses the cruelty, while falling for one of the trainers. 5. * What it's about: The memoirs (read: sexual escapades) of rock and roll groupie Des Barres, which will be worked into a series for HBO.* Who's starring: Zooey Deschanel. 6.

This article examines the results of the Grant study, and discusses some of it's merits and shortcomings. A common critique of longitudinal studies is that they are too time consuming and results take a long time, which is why the Grant Study is so ground-breaking. Interestingly, many of the participents lead happy and successful lives, although many suffered from what director GEorge Valliant described as mental illness. Some of the most interesting distinctions I found were that exersice as a young adult effects later mental health more than physical health, and alchoholism is a precursor for other issues in one's life, not a coping mechanism. Also, Valliant found that relationships were easily the most important factor in one's overall happiness. by brittanyacooper Feb 25