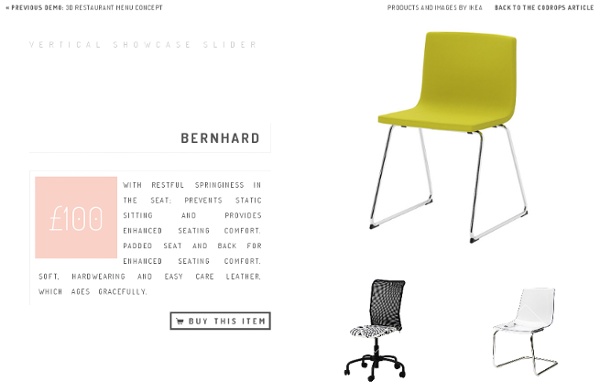 Design Tip: Never Use Black by Ian Storm Taylor One of the most important color tricks I’ve ever learned was to avoid using the color black in my work. Mrs. Zamula, my childhood art teacher, first warned me about black when I was in middle school. And I heard the same again multiple times at RISD. It sounds weird at first, but it’s good advice. Fullscreen Layout with Page Transitions A simple responsive layout with some fancy page transitions. The idea is to show four items initially and expand them. Some additional page transitions are added for inner items. View demo Download source

Gridpak - El generador grid Responsive Gridpak.css A straightforward CSS which contains the appropriate media queries and pre-defined selectors based on the grids you have created. The system relies on .rows and .spans. You can either attach the classes to your HTML elements or re-purpose their properties to allow for more semantic markup (suggested). How to use

Fullscreen Pageflip Layout with BookBlock Table of Contents ← Previous Demo: Responsive Audio Player Back to the Codrops Article Self-destruction The Hon. Francis Gillette, in a speech in Hartford, Conn., in 1871, said that there was "in Connecticut, on an average, one liquor shop to every forty voters, and three to every Christian church. In this city, as stated in the _Hartford Times_, recently, we have five hundred liquor shops, and one million eight hundred and twenty-five thousand dollars were, last year, paid for intoxicating drinks. 52 of the very best website designs from 2012 featured on Admire the Web It was our first full year in 2012 and we featured some truly awesome website designs. Only the very best get through our panel of scrutineers and we don’t display any old website designs. So as you can imagine, with well over 365 website designs we featured in 2012 and we are going to pick one from every week to get the ultimate 52 from 2012 awesome website design inspiration. Be prepared to be inspired.

It's More Fun in the Philippines » Boracay Any iconic photos of Boracay you’ve seen are likely to be from the westward-facing White Beach — four kilometers of white, powdery fine sand dotted with resorts, shops, and restaurants. White Beach is composed of three sections. The northernmost section – Station 1 – has the widest beachfront. This has the best (and most expensive) resorts and hotels. 5 Tips for Responsive Builds If design and content strategy stops when the build phase starts it’s time to rethink your process. The role of a modern front-end developer goes beyond following pre-defined blueprints. An iterative, agile-like approach is vital to account for responsive design challenges that inevitably arise as a website takes shape. With that in mind here are my 5 tips for responsive builds: