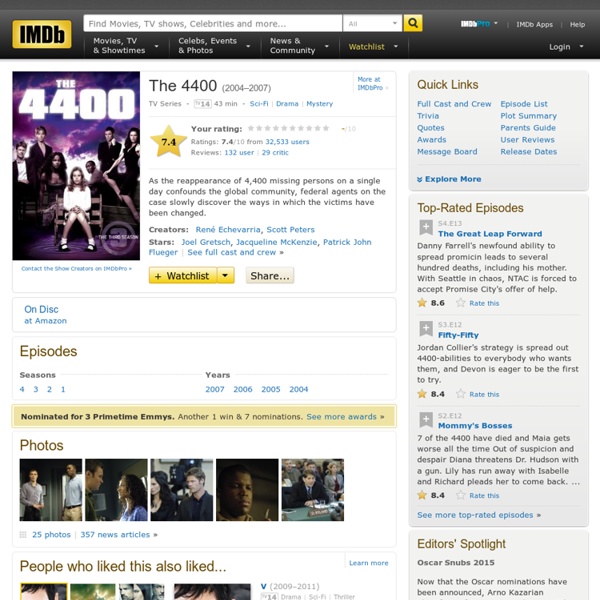 Wayward Pines (TV Mini-Series 2015) The Big Bang Theory (TV Series 2007–  Backstrom (TV series) Backstrom is an American crime comedy-drama television series developed by Hart Hanson based on the Swedish book series by Leif G. W. Persson.[1] The series is set in Portland, Oregon and filmed in Vancouver, British Columbia. The series premiered on January 22, 2015.[2] The first season's finale will air on April 30, 2015.[3] Backstrom centers on Everett Backstrom (Rainn Wilson), an "overweight, offensive, irascible" Portland Police Bureau detective lieutenant who is engaged in a constant struggle with his "self-destructive" tendencies, and is part of a team of eccentric criminologists. In July 2012, CBS greenlit a pilot episode to be produced for Backstrom.[16] The pilot for the series was filmed in Vancouver, British Columbia, Canada.[17] Backstrom has been met with mixed reviews from critics.

One Tree Hill (TV Series 2003–  My So-Called Life My So-Called Life is an American teen drama television series created by Winnie Holzman and produced by Edward Zwick and Marshall Herskovitz.[3][4] It originally aired on ABC from August 25, 1994, to January 26, 1995, and was distributed by The Bedford Falls Company with ABC Productions. Set at the fictional Liberty High School in the suburbs of Pittsburgh, Pennsylvania, it follows the emotional travails of several teenagers in the social circle of main character Angela Chase, played by Claire Danes.[5] The critically acclaimed but short-lived show ended in a cliffhanger with the expectation that it would be picked up for an additional season, but it was officially canceled on May 15, 1995. The show was praised for its portrayal of adolescence and the commentary of its central character, Angela. It was the first teen drama that didn't feel like an after-school special. No one ever learned a very important lesson or uttered the phrase 'I love you, Dad.' Themes[edit] Characters[edit]