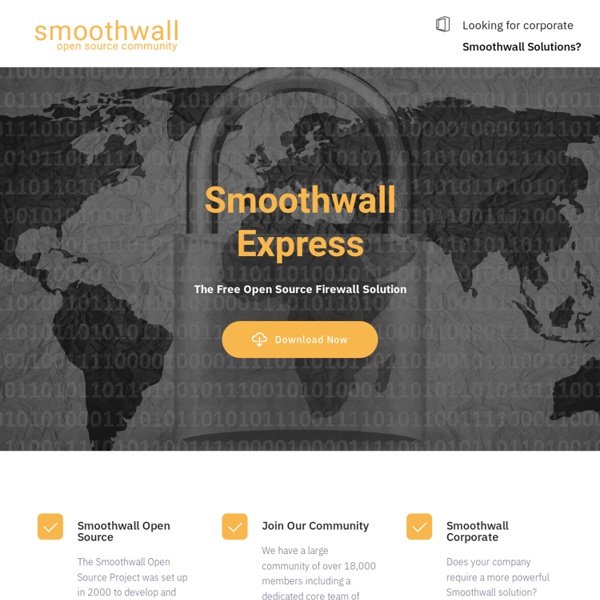 IPCop Eric M. Jackson: Why 'The PayPal Mafia' Is Killing It Last month, local reviews site Yelp filed for an initial public offering. Founded in 2004 by Jeremy Stoppelman and Russel Simmons, Yelp is the latest in a long line of companies started by PayPal alumni to hit it big. Dubbed the "PayPal Mafia" in an article by Fortune magazine a few years ago, alumni from the payments company have gone on to start or run an amazing roster of companies. Reid Hoffman founded LinkedIn. Chad Hurley, Steve Chen, and Jawed Karim started YouTube. David Sacks founded Yammer. SmoothWall - Wikipedia Smoothwall is a private software company based in the UK that develops firewall and web content filtering software, and which also maintains the Smoothwall open source project. History[edit] Smoothwall began life as Smoothwall GPL, a freely redistributable version, in August 2000, with a proprietary version sold by Smoothwall Ltd from November 2001. It is now available in several free and paid-for versions. According to figures released by the company, Smoothwall currently[when?] has over 1 million active installations worldwide.[2]

The Open Source Networking Community Audio Downloads : SayIt Are you ready to dazzle and amaze your friends by generating custom computer synthesized speech? Yes, I know it sounds almost like a dream too wonderful to be true, but your computer just needs a nudge in the right direction... With AnalogX SayIt! Inspired by that evil device many of us were tormented by as children, the Speak&Spell, AnalogX SayIt gives your computer a synthesized voice to rival that of Colossus (from the movie Colossus: The Forbin Project). Type in any word or phrase, set the sliders to the appropriate settings, and click the 'Render' button - out pops a nice little wave file.

Material Science Madness: Crazy Metal Melts in Your Hand There is an incredible metal that shatters like glass, melts in a human hand, attacks other metals but is non-toxic to humans, and acts like an alien life form when exposed to sulfuric acid and dichromate solution. It sounds too amazing to be true, but gallium is an absolutely real chemical element that’s found in some of the gadgets we use every day. But perhaps more interestingly, there are a ton of insane experiments scientists like to do with gallium. Thanks to its odd properties and behavior, gallium can do some pretty strange things in the lab. The above video shows what happens when gallium “attacks” aluminum. The “gallium beating heart” experiment is a popular one that shows how gallium can act like a living thing when submerged in sulfuric acid and a dichromate solution.

30 free programming eBooks - citizen428.blog() Since this post got quite popular I decided to incorporate some of the excellent suggestions posted in the comments, so this list now has more than 50 books in it. BTW: I’m not very strict on the definition of “ebook”, some of them are really just HTML versions of books. [UPDATED: 2012-01-18] techinterview Khan Academy