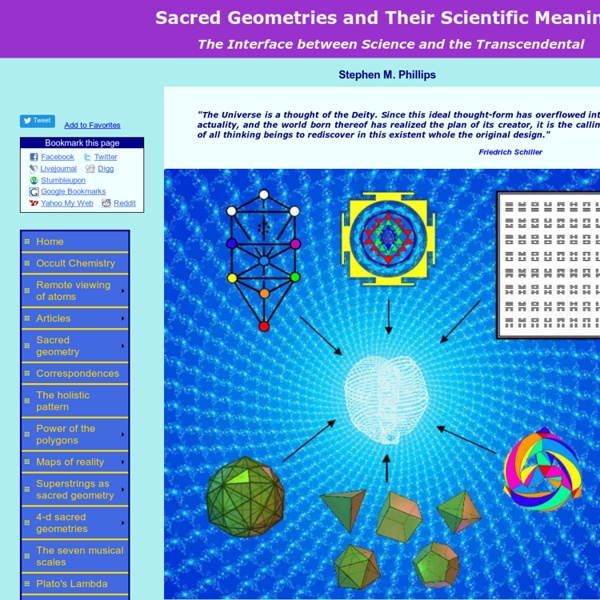 Latest research Latest addition Latest news My new book Proof that the sacred geometries of religions embody a universal design that encodes the physics of superstrings, the human skeleton, DNA and the mathematics of the seven musical scales. (more)

The Hero's Quest |Arthurian Legend| |Beowulf| |Classical Mythology| |Creation Stories| |Fairy Tales and Folktales| |Homer, The Iliad and The Odyssey| |Mythology Main Page| The all-purpose guide to epic moviesThis chart shows different archetypal roles at work in Harry Potter, Star Wars, and other movies: the hero, the threshold guardian, the trickster, etc. An Anti-Hero of One's OwnThis TED-ED video (4:11) explores the pattern of the anti-hero using references to Fahrenheit 451 and 1984, among others. Human Form From Sacred Geometry New Discoveries Linking The Great Pyramid to the Human Form Copyright 1997 - 2000 CHARLES R. HENRY Waking Up is Hard to Do "Waking up" isn't a one-day event, though it often starts that way. It is an ongoing process of re-learning everything you ever learned, correcting the brainwashing and seeing the world through new lenses. But the hardest thing is overcoming the social ostracism that accompanies observing things radically differently from those around you.

The Great Pyramid of Giza The 35th Course of Masonry is quite notable in that it is particularly thick. At approximately 50 inches, it is the thickest course other than the base courses. The majority of courses range between 25 and 35 inches. As measured by Professor Petrie, the midline of the 35th Course occurs at 1162.4 B” (British Inches) from the Pavement level which is equivalent to 1161.1 Pyramid Inches. Professor Piazzi Smyth and subsequently D. Davidson subscribed a value for this elevation at 1162.6 Pyramid Inches with the explanation that 1162.6 x 10p =36,524 Pyramid Inches which is the Base Perimeter.

U-M Fantasy and Science Fiction Website Welcome one and all to the University of Michigan Fantasy and Science Fiction Home Pages. We hope you find this page a valuable resource. These pages are dedicated to assisting scholars of all types all over the world. We are constantly striving to provide an extensive and useful location for all types of information and tools that will help us study fantasy and science fiction. Olaf Stapledon said it best when he wrote: "Did not our life issue daily as more or less firm threads of active living, and mesh itself into the growing web, the intricate, ever-proliferating pattern of mankind?"

The Platonic Solids and Sacred Geometry Sacred geometry is a term which describes ... The geometrical laws which create everything in existence. This term has been used by mathematicians, geometricians, spiritual seekers, anthropologists, and archaeologists to encompass the religious, philosophical, and spiritual beliefs that have sprung up around geometry in all the major cultures during the course of human history. Every thought or emotion we produce has a specific geometrical pattern.

Spirit Science, from forum *I realise there is another thread titled Atlantis - a real eye opener, but this thread was discussing Atlantis specifically and I believe Jordanduchnycz should have a dedicated thread as more video's have been released we are entering some new exciting territory and it's being told in a way that is bringing incredibly complicated idea's and theories into general discussion. Jordan is 20 and in April he begun telling a story. Here it is.. Mystery of the Real 3D Mandelbrot Fractal They're all very nice, but imagine such pictures in three dimensions, with all the advantages that 3D can allow such as parallax, perspective, and richer detail along with subtle light sourcing, shadows, and reflections. And actually, it turns out there are quite a few '3D' Mandelbot pics out there if you look..... Mandelbrot Flavours .....But are they the real McCoy, or just pale imitations? In fact, whenever you see a so-called 3D Mandelbrot image, roughly speaking, they can be divided into four types:

Analemma In astronomy , an ( / ˌ æ n ə ˈ l ɛ m ə / ; from Greek ἀνάλημμα "pedestal of a sundial ") is a curve representing the changing angular offset of a celestial body (usually the Sun ) from its on the celestial sphere as viewed from another celestial body (usually the Earth). The term is used when the observed body appears, as seen from the viewing body, to move in a way that is repeated at regular intervals, such as once a year or once a day. The analemma is then a closed curve, which does not change. Because of the Earth's annual revolution around the Sun in an orbit that is elliptical and tilted relative to the plane of the equator, an observer at a fixed point on the Earth sees the Sun appear to move in an analemma around a mean position, taking a year to do so. The mean position appears to revolve around the Earth once every mean solar day , because of the Earth's rotation.

Incubation    Birth of a Thing, Thought, or Cellestial Event Incubation: Within 2 Other Withins Left and Right Brain Hemispheres The Ancients of Egypt schooled their initiates in the concept that there are two sides to everything.