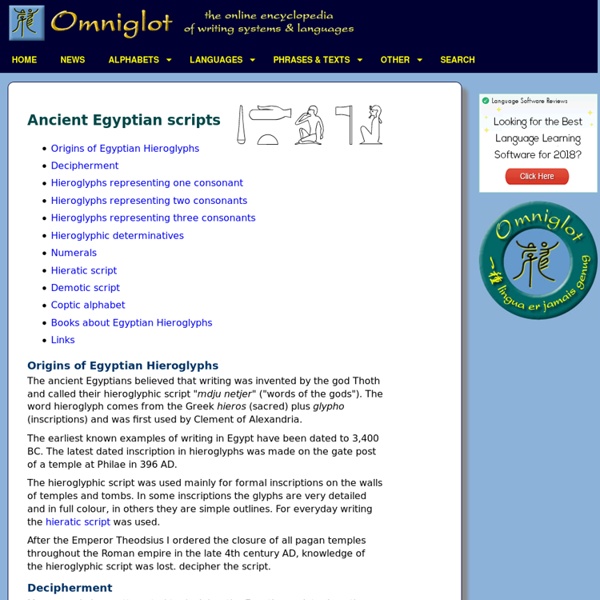 Origins of Egyptian Hieroglyphs The ancient Egyptians believed that writing was invented by the god Thoth and called their hieroglyphic script "mdju netjer" ("words of the gods"). The word hieroglyph comes from the Greek hieros (sacred) plus glypho (inscriptions) and was first used by Clement of Alexandria. The earliest known examples of writing in Egypt have been dated to 3,400 BC. The latest dated inscription in hieroglyphs was made on the gate post of a temple at Philae in 396 AD. The hieroglyphic script was used mainly for formal inscriptions on the walls of temples and tombs. After the Emperor Theodsius I ordered the closure of all pagan temples throughout the Roman empire in the late 4th century AD, knowledge of the hieroglyphic script was lost. decipher the script. Decipherment Many people have attempted to decipher the Egyptian scripts since the 5th century AD, when Horapollo provided explanations of nearly two hundred glyphs, some of which were correct. Notable features Numerals Related:  Language

How speaking multiple languages benefits the brain - Mia Nacamulli Amazed by what you have learned about having a bilingual brain? Then, start learning another language now! This website has tons of free lessons, games and quizzes to get you started! Pick one language or even two languages and get that gray matter growing. Speaking more than one language is like exercise for the brain? Love all this brain talk? Want to learn another language (or two or three or...)? Ancient Egypt Online OED birthday word generator: which words originated in your birth year Do you know which words entered the English language around the same time you entered the world? Use our OED birthday word generator to find out! We’ve scoured the Oxford English Dictionary (OED) to find words with a first known usage for each year from 1900 to 2004. Simply select the relevant decade and click on your birth year to discover a word which entered the English language that year. Please note that the dates given for these words refer to the current first known usage of the word. The OED team is continuously researching the histories of words (something you may be able to help with), and it’s therefore possible that we will find an earlier sense of the words during our research. If you are a subscriber or have access to the OED, visit our guide to learn how to find your own personal OED birthday word. Click on your birth year in the left-hand column to discover your OED birthday word. Words originating in the 1900s include: Words originating in the 1910s include: Bollywood, n.

Ancient Greece What we did | Mapping the origin of Indo-European Step 1 – Building a database of cognates Cognates are similar words shared across languages and taken to indicate relatedness via common ancestry. To be diagnosed as cognate the words must have similar meaning and, most importantly, show systematic sound correspondences indicating a common origin. For example, the English word five has cognates in German (funf), Swedish (fem) and Dutch (vijf), reflecting descent from proto-Germanic (*fimf). Cognate identification can be tricky. The table below shows an example dataset with six languages and cognate sets colour coded across four meanings. We compiled a database of word forms and cognacy judgements across 103 Indo-European languages (including 20 ancient languages) and 207 meanings. Step 2 – Location data To work out where Indo-European languages have come from, we use information about where the contemporary languages in our sample are spoken today and where the ancient languages are thought to have been spoken. Figure: Germanic languages

Babbler birds could shed light on human language Language: The chestnut-crowned babbler. Photo: Supplied Move over, parrots. Scientists studying the social birds have discovered that they can rearrange meaningless sounds in their calls to form different, meaningful messages. The findings, described in the journal PLOS Biology, may shed light on how the features of human language came to be. "Our results indicate that the capacity to rearrange meaningless sounds in order to create new signals occurs outside of humans," the authors wrote. It could hint at "a potential early step towards the generative phonemic system of human language", they added. One of the fundamental abilities that sets humans apart from other animals is language - the ability to string meaningless sounds together to communicate complex ideas to one another. Scientists have long studied different animals, from apes to zebra finches, for hints about the evolution of language abilities. Take the sounds A, T and B. Los Angeles Times

Playful Illustrations Make It Easy to Learn Chinese. By ShaoLan Hsueh. Elephants distinguish age, gender, and ethnicity in human voices Last week, we learned how elephants have a call that means “HUMAN”, used to alert other elephants to potential danger. This week, scientists reveal that elephants seem to know which humans might pose an actual threat: they can actually distinguish between humans’ age, gender, and ethnicity from just acoustic cues. Free-ranging elephants often encounter the cattle-herding Maasai people, who are semi-nomadic and sometimes kill elephants over conflicts over water or land for grazing. In a previous study, the scent of red robes worn by a Maasai man provoked a fearful response in elephants. To further tease this out, a team led by Karen McComb and Graeme Shannon from the University of Sussex recorded Maasai men, women, and boys, along with men of the nearby, crop-farming Kamba people. Further, the elephants were more likely to react defensively to playbacks of Maasai men than of Maasai women and boys. This is the first evidence of wild animals making fine distinctions in human voices.

ToK- language-Why H is the most contentious letter in the alphabet Is it 'aitch' or 'haitch'? Photograph: Alamy The alphabet is something not to be argued with: there are 26 letters in as fixed a sequence as the numbers 1-26; once learned in order and for the "sounds they make", you have the key to reading and the key to the way the world is classified. Actually, in the course of writing my book about the history of the letters we use, Alphabetical, I discovered that the alphabet is far from neutral. In Britain, H owes its name to the Normans, who brought their letter "hache" with them in 1066. Perhaps the letter H was doomed from the start: given that the sound we associate with H is so slight (a little outbreath), there has been debate since at least AD 500 whether it was a true letter or not. The world is full of people laying down the law about the "correct" choice: is it "a hotel" or "an otel"; is it "a historian" or "an historian"?

20 words that once meant something very different Words change meaning over time in ways that might surprise you. We sometimes notice words changing meaning under our noses (e.g., unique coming to mean “very unusual” rather than “one of a kind”) — and it can be disconcerting. How in the world are we all going to communicate effectively if we allow words to shift in meaning like that? The good news: History tells us that we’ll be fine. Nice: This word used to mean “silly, foolish, simple.” We’re human. Watch Anne Curzan’s TED Talk to find out what makes a word “real”.