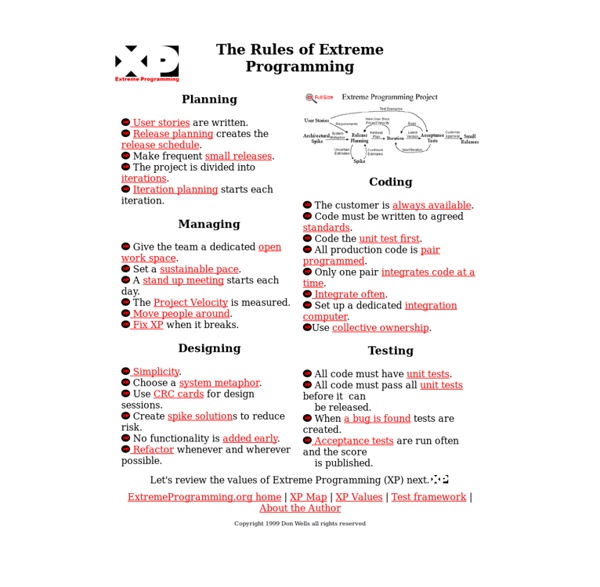 Planning User stories are written. Release planning creates the release schedule. Make frequent small releases. The project is divided into iterations. Iteration planning starts each iteration. Managing Give the team a dedicated open work space. Set a sustainable pace. A stand up meeting starts each day. The Project Velocity is measured. Move people around. Fix XP when it breaks. Designing Simplicity. Choose a system metaphor. Use CRC cards for design sessions. Create spike solutions to reduce risk. No functionality is added early. Refactor whenever and wherever possible.

The Wrong Abstraction — Sandi Metz I originally wrote the following for my Chainline Newsletter, but I continue to get tweets about this idea, so I'm re-publishing the article here on my blog. This version has been lightly edited. I've been thinking about the consequences of the "wrong abstraction." My RailsConf 2014 "all the little things" talk included a section where I asserted: Some lesser-known truths about programming My experience as a programmer has taught me a few things about writing software. Here are some things that people might find surprising about writing code: Averaging over the lifetime of the project, a programmer spends about 10-20% of his time writing code, and most programmers write about 10-12 lines of code per day that goes into the final product, regardless of their skill level. Good programmers spend much of the other 90% thinking, researching, and experimenting to find the best design.

Mouseover DOM Inspector v2.0 Help Overview The Mouseover DOM Inspector, or MODI for short, is a favelet (also known as a bookmarklet) that allows you to view and manipulate the DOM of a web page simply by mousing around the document. Browsers currently supported are Firefox, Mozilla, Netscape 8, Opera 7.5+ and MSIE6+ on all of their respective Operating Systems. To begin using the Mouseover DOM Inpsector, simply add the following link to your bookmarks by right clicking and selecting "Add to Favorites" or "Bookmark this Link" or whatever the nomanclature of your browser of choice. Should you encounter problems with this software, please contact me and let me know the URL you were on, the browser and operating system, if you are using a preference file along with the url to that preference file and as detailed a description as you can with what you were doing when the problem occured. Suggestions for improvement and functionality enhancements are also welcome.

Optimizing C and C++ Code Embedded software often runs on processors with limited computation power, thus optimizing the code becomes a necessity. In this article we will explore the following optimization techniques for C and C++ code developed for Real-time and Embedded Systems. Many techniques discussed here have roots in the material we covered in the articles dealing with C to Assembly translation. A good understanding of the following articles will help: Introduction to Test Driven Development (TDD) Test-driven development (TDD) (Beck 2003; Astels 2003), is an evolutionary approach to development which combines test-first development where you write a test before you write just enough production code to fulfill that test and refactoring. What is the primary goal of TDD? One view is the goal of TDD is specification and not validation (Martin, Newkirk, and Kess 2003). In other words, it’s one way to think through your requirements or design before your write your functional code (implying that TDD is both an important agile requirements and agile design technique). Another view is that TDD is a programming technique.

Knuth: Computer Programming as an Art CACM, December 1974 When Communications of the ACM began publication in 1959, the members of ACM'S Editorial Board made the following remark as they described the purposes of ACM'S periodicals [2]: "If computer programming is to become an important part of computer research and development, a transition of programming from an art to a disciplined science must be effected." Such a goal has been a continually recurring theme during the ensuing years; for example, we read in 1970 of the "first steps toward transforming the art of programming into a science" [26].

Top 10 Ways to be Screwed by "C" To get on this list, a bug has to be able to cause at least half a day of futile head scratching, and has to be aggravated by the poor design of the "C" language. In the interests of equal time, and to see how the world has progressed in the 20-odd years since "C" escaped from its spawning ground, see my Top 10 Ways to be Screwed by the Java programming language, and for more general ways to waste a lot of time due to bad software, try my Adventures in Hell page. A better language would allow fallible programmers to be more productive. Infallible programmers, of the type unix' and "C" designers anticipated, need read no further. In fairness, I have to admit that the writers of compilers have improved on the situation in recent years, by detecting and warning about potentially bad code in many cases.

IE6 Three Pixel Gap I've provided advanced CSS consulting for Milo and many other big sites. Hire me to help you too. Big John's CSS Webinars! How AJAX Works: 10 Practical Uses For AJAX Jun 14 2009 AJAX has gotten more and more popular over the years, and has allowed web applications to act more and more like desktop applications. AJAX can provide a lot of additional functionality that could not be accomplished any other way. What Is AJAX? do not use debuggers Date: Wed, 6 Sep 2000 12:52:29 -0700 (PDT) From: Linus Torvalds <torvalds@transmeta.com> To: Tigran Aivazian <tigran@veritas.com> Subject: Re: Availability of kdb On Wed, 6 Sep 2000, Tigran Aivazian wrote: > > very nice monologue, thanks. It would be great to know Linus' opinion. I> mean, I knew Linus' opinion of some years' ago but perhaps it changed? He> is a living being and not some set of rules written in stone so perhaps> current stability/highquality of kdb suggests to Linus that it may be> (just maybe) acceptable into official tree? I don't like debuggers. Never have, probably never will.

Six ways to write more comprehensible code I learned to write, clear, maintainable code the hard way. For the last twelve years, I've made my living writing computer games and selling them over the Net using the marketing technique that was once charmingly known as shareware. What this means is that I start with a blank screen, start coding, and, a few tens of thousands of lines of code later, I have something to sell. This means that, if I make a stinky mess, I'm doing it in my own nest. When I'm chasing down a bug at 3 a.m., staring at a nightmare cloud of spaghetti code, and I say, "Dear God, what idiot child of married cousins wrote this garbage?"

CSS Image Maps - Flickr-like Technique? Skip to Example An alternative to image-only CSS maps has been published. If you're looking for an easier way of creating image maps involving a single image, you may be interested in reading CSS Image Maps, Redux Below is a sample image map that's built entirely using CSS and XHTML. While I've added support for Javascript (item titles are simply displayed beneath the image), I've disabled it in this example -- I've run into a bit of a problem when JS is enabled and CSS is disabled (more details below).

30 game scripts you can write in PHP, Part 1: Creating 10 fundamental scripts Getting started As both a game master/storyteller and a developer, I frequently find myself writing little utilities and scripts to help me when running, planning, and playing games. Sometimes I need a quick idea. Other times, I just need a whole pile of names for Non-Player Characters (NPCs).