How to Increase Dopamine Levels: Foods to Eat and What to Do 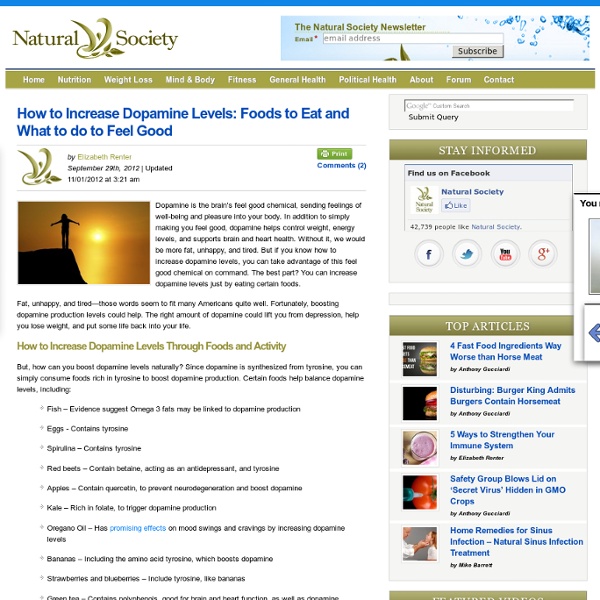 Dopamine is the brain’s feel good chemical, sending feelings of well-being and pleasure into your body. In addition to simply making you feel good, dopamine helps control weight, energy levels, and supports brain and heart health. Without it, we would be more fat, unhappy, and tired. But if you know how to increase dopamine levels, you can take advantage of this feel good chemical on command. The best part? You can increase dopamine levels just by eating certain foods. Fat, unhappy, and tired—those words seem to fit many Americans quite well. But, how can you boost dopamine levels naturally? Another solution for how to increase dopamine levels and flood your brain with this feel-good chemical is exercise. Alternatively, you could also take supplements to boost dopamine, although foods and exercise may be the two best and most beneficial options. What you put in your body and how you use your body determines how you feel. Additional Sources: RaySahelian Medhelp Reuniting NaturalNews Related:  Brain • New Brain Health

Health - Alan Jacobs - The Lost World of Benzedrine Favored by artists and mathematicians, the drug powered a great deal of innovation in the 20th century. A 1939 Benzedrine inhaler ad from Smith, Kline and French Wikipedia Someone really needs to write a history of the influence of Benzedrine on American culture. For a period of about twenty years, from the 1930s to the 1950s, a good bit of American artistic and scientific energy was generated by this lively amphetamine, which was originally created by Smith, Kline, and French in 1928 as a nasal and bronchial decongestant. Soon enough people discovered that it had pleasant, useful, and energizing side-effects, which led to its use by all sorts of people who needed to boost their creative energies. Google's Ngrams shows us how it rocketed into the public consciousness: And also helps us see when the cute little pills began to be called "bennies": The poet W. Of course, bennies had a tendency to ruin the body of the person using them.

As we sleep, speedy brain waves boost our ability to learn Scientists have long puzzled over the many hours we spend in light, dreamless slumber. But a new study from the University of California, Berkeley, suggests we're busy recharging our brain's learning capacity during this traditionally undervalued phase of sleep, which can take up half the night. UC Berkeley researchers have found compelling evidence that bursts of brain waves known as "sleep spindles" may be networking between key regions of the brain to clear a path to learning. These electrical impulses help to shift fact-based memories from the brain's hippocampus -- which has limited storage space -- to the prefrontal cortex's "hard drive," thus freeing up the hippocampus to take in fresh data. Spindles are fast pulses of electricity generated during non-REM sleep, and they can occur up to 1,000 times a night. "A lot of that spindle-rich sleep is occurring the second half of the night, so if you sleep six hours or less, you are shortchanging yourself.

1,3,7-trimethylxanthine gives you wings. 1,3,7-trimethylxanthine (sometimes used as a pesticide to kill frogs) also happens to be one of the world’s most popular drugs. Users find that it improves attention and concentration, and slightly decreases their heart rate at low doses. It is habit forming however and has been known to cause agitation, anxiety, insomnia, disorientation, nausea, delirium, hallucinations and tinnitus. Some people report involuntary tremors or even convulsions. Overdoses can cause seizures, respiratory failure and cardiopulmonary arrest. The metabolic half-life of the drug is usually somewhere between three and seven hours so a typical user will take somewhere between fifteen and thirty-five hours to process 95% of their initial dose. « Older Ad Aspera Per Astra... | Church of fools...

How to increase serotonin in the human brain without drugs Ask Lifehacker: Quitting caffeine Dear Lifehacker, Every afternoon around 4 o'clock I drag myself over to the office Coke machine for a much-needed kick after a post-lunch crash. I know how ridiculously addictive Coke and coffee is, and how quickly one can fall into the habit of needing caffeine just to get through the day. So how the @#%! do I wean myself off this crap? Vitamin B? There's got to be a better way. Sincerely, Caf Fiend Dear Mr. Without a doubt, caffeine addiction is an occupational hazard for office workers. There are a lot of good reasons to reduce your caffeine intake. Cold turkey caffeine quitters will experience unpleasant withdrawal symptoms, like headaches, distraction, irritability and possibly nausea and dizziness. Two ways to go about laying off the caffeinated sauce: Substitute half your regular caffeine intake with decaffeinated drinks. To help you get an idea of how much caffeine you consume in a typical day, here's a chart of common caffeinated items, courtesy of web site Twilight Bridge:

aspie quiz | Search Results There are quite a few online Asperger’s Syndrome tests. I thought it might be fun to take each of them and then do a little write up. So, welcome to “Take a Test Tuesday,” a new series that will go on for as many weeks as I can continue digging up new tests to take. I’m going to kick it off with my favorite online Asperger’s test, The Aspie Quiz, but first a few words about online tests in general. Although some of the tests you’ll find on the internet are used as part of a diagnostic battery, it’s important to remember than an official diagnosis includes additional elements such as neuropsychological testing, observation by a psychiatrist, an assessment of childhood development and interviews with family members. While you can take these quizzes and get a result that says you’re “most likely an aspie,” they aren’t diagnostic instruments. With that in mind, let’s get started. The Aspie Quiz The Aspie Quiz was developed by Rdos. Pros and Cons of the Aspie Quiz Pros Cons Taking the Test Mine:

This Is Your Brain on Coffee Photo This column appears in the June 9 issue of The New York Times Magazine. For hundreds of years, coffee has been one of the two or three most popular beverages on earth. Other recent studies have linked moderate coffee drinking — the equivalent of three or four 5-ounce cups of coffee a day or a single venti-size Starbucks — with more specific advantages: a reduction in the risk of developing Type 2 diabetes, basal cell carcinoma (the most common skin cancer), prostate cancer, oral cancer and breast cancer recurrence. Perhaps most consequential, animal experiments show that caffeine may reshape the biochemical environment inside our brains in ways that could stave off dementia. There’s still much to be learned about the effects of coffee. Correction: June 28, 2013 The Well column on June 9 about the health benefits of coffee referred incorrectly to its popularity.

Research And Benefits - Research With Vibrated Water Research on the effect of vibrations 1 on water 2 With the spreading of Sahaja Yoga, it became well known that water can be vibrated by Shri Mataji, directly by her personal impact or in the presence of her photograph. Many people experienced medicinal properties of such water. Vibrated water doesn't get spoiled when stored for a very long time, like several months. For estimating the quality of the water we used standard, worldwide accepted, sanitary chemical characteristics, which indirectly characterize the degree of water contamination. We performed several experiments with various sources of water. Obtained results (Table 1) show that the effect of vibrations has changed all the characteristics. In the next experiment, the water was vibrated by adding to it some water vibrated by Shri Mataji personally. 15 milliliters of vibrated water were added to 1.5 liters of water taken from the tap. The results are shown in table 2. Lyudmila Tkachenko, Dr. of Chemistry, Kiev, Ukraine back to top

Blog » Blog Archive » 23 Surprisingly Effective Treatments for Depression (One Year Later) For the live-updated, interactive version of this infographic, click here. A year ago, we published one of our most popular findings – 6 surprisingly effective treatments for depression. I went ahead and repeated the analysis today, and now we have 23 treatments in the “surprisingly effective” category for depression. This chart is based on 4,956 people with depression who participated in CureTogether surveys, compared to 944 people last year. The top treatments are still exercise, sleep, and talking to others – they are popular and effective ways to feel better when you’re depressed. But here are 23 things you may not have tried that thousands of others say worked well for them: 1. Another new thing on this chart: alcohol was added as a treatment, and was rated to make depression worse instead of better. To navigate the graph above: Where did this data come from? This is part of our regular series of research findings.

Inside Perspectives | of Asperger Syndrome and the Neurodiversity Spectrum