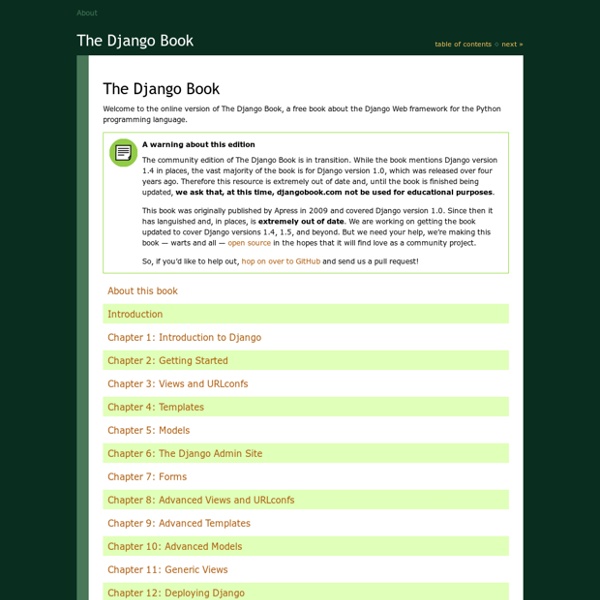 Welcome to the online version of The Django Book, a free book about the Django Web framework for the Python programming language. A warning about this edition The community edition of The Django Book is in transition. While the book mentions Django version 1.4 in places, the vast majority of the book is for Django version 1.0, which was released over four years ago. Therefore this resource is extremely out of date and, until the book is finished being updated, we ask that, at this time, djangobook.com not be used for educational purposes. This book was originally published by Apress in 2009 and covered Django version 1.0.

How Open Source Software Can Improve the Library - DegreeTutor.com Remember a time when doing research required us to have to go to the library? Your school had one, and that's probably where you spent most of your library time. If it wasn't your school, then it was probably your local town or city library. Python beginner's mistakes Every Python programmer had to learn the language at one time, and started out as a beginner. Beginners make mistakes. This article highlights a few common mistakes, including some I made myself. Beginner's mistakes are not Python's fault, nor the beginner's.

Frictionless Web Development with Flask Feb 03, 2011 Static Sites and Rapid Iteration with a Lightweight Python Kit of Flask, YAML, Markdown and Fabric. For a while I've been looking for a more fluid toolkit for rapidly developing and iterating static sites. I have three use cases in mind: client html mockups with rapid iterations or slight variations, maintaining the static client sites that I have in the stable, and hacking on my own site. In each of these cases, dealing with databases, CMSs, versioning, or directories of HTML files was either too heavy, too slow, or both. My goals are straightforward:

Setting up a Django Project for the Non-Programmer Yet another quality guest post from the jack of all trades Michael Herman, co-founder/hacker of Real Python. We all learned something from this post, ha! Check out the accompanying videos: This tutorial answers the question, "How do I setup a Django project from scratch?". 7 Python Libraries you should know about In my years of programming in Python and roaming around GitHub's Explore section, I've come across a few libraries that stood out to me as being particularly enjoyable to use. This blog post is an effort to further spread that knowledge. I specifically excluded awesome libs like requests, SQLAlchemy, Flask, fabric etc. because I think they're already pretty "main-stream".

Learning with Python Navigation How to Think Like a Computer Scientist¶ Learning with Python¶ 2nd Edition (Using Python 2.x) by Jeffrey Elkner, Allen B. Web Services in Python (Part 2) - Serving Static Files The last Python web server wasn't that great - it only gives you a hello world. If you're smart, you may have already figured out how to do Comet with it with very little code - we'll go over that in the next post. But.. the server doesn't even serve JavaScript files yet! Well, don't panic.