Can you really stand dead silence? 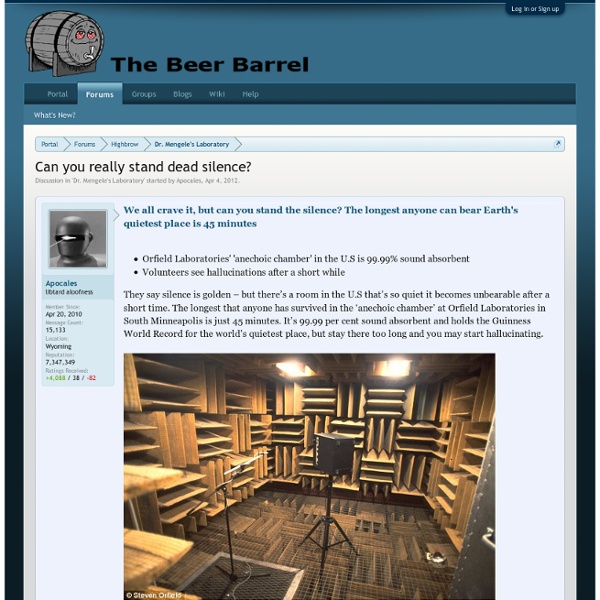 Yes, one must go to the desert to do battle with devils. A saint would be able to best 45 minutes -- but then, who's a saint? Librarians, it would seem.... Maybe we should redo the test with an internet connection.... The next morning I began the wait for Arsenius who, I was told, would arrive later that day. It gave me some time to think about all the things Akakios had told me about the christian god.

8 Artists Who Poured Their Heart and Soul Into Their Work (Also: Their Blood and Urine) All artists put a little bit of their soul into every piece. But these artists put their soul – and a whole lot more – into their art. 1. Hair and Nails "Chrysler Air Raid Siren" What you see pictured above is a Chrysler Air Raid Siren, the most powerful siren in the world. It's the size of a car, measuring near 12-feet in length and standing more than 6-feet tall. It also weighs twice as much as today's typical car. This gigantic siren is powered by an 180-HP Chrysler Industrial V-8 HEMI® gasoline engine. The super-duty engine directly drives a three-stage compressor that blows 2,610 cubic feet of air a minute, at nearly 7 PSI, into a giant siren rotor.

The 5 Most Terrifying Civilizations In The History of the World They say that those who ignore history are doomed to repeat it, so pay attention for Christ's sake. It turns out that many of our ancestors achieved levels of violence that take them right out of the realm of "badass" and into the less cool area of ball-shriveling atrocity. These are the civilizations you don't want to face during, say, your next time travel adventure. And yes, the Spartans are down there. History is kind of spotty on the Celts (they never wrote anything down, and many of the witnesses died brutally) but what facts survived confirm one thing: They had gigantic Celtic balls. First of all, they had a thing for severed heads. Image evolution What is this? A simulated annealing like optimization algorithm, a reimplementation of Roger Alsing's excellent idea. The goal is to get an image represented as a collection of overlapping polygons of various colors and transparencies.

New Car Engine Sends Shock Waves Through Auto Industry Despite shifting into higher gear within the consumer's green conscience, hybrid vehicles are still tethered to the gas pump via a fuel-thirsty 100-year-old invention: the internal combustion engine. However, researchers at Michigan State University have built a prototype gasoline engine that requires no transmission, crankshaft, pistons, valves, fuel compression, cooling systems or fluids. Their so-called Wave Disk Generator could greatly improve the efficiency of gas-electric hybrid automobiles and potentially decrease auto emissions up to 90 percent when compared with conventional combustion engines. The engine has a rotor that's equipped with wave-like channels that trap and mix oxygen and fuel as the rotor spins. These central inlets are blocked off, building pressure within the chamber, causing a shock wave that ignites the compressed air and fuel to transmit energy. The Wave Disk Generator uses 60 percent of its fuel for propulsion; standard car engines use just 15 percent.

Interesting Trivia?! When you’re finished reading, check out the new trivial posts: More Interesting Trivia and Even More Interesting Trivia. Mum sent me this so it has to be true – right? Here are some ‘facts’ about the 1500s: They used to use urine to tan animal skins, so families used to all pee in a pot & then once a day it was taken & sold to the tannery…….if you had to do this to survive you were “Piss Poor” But worse than that were the really poor folk who couldn’t even afford to buy a pot, they “didn’t have a pot to piss in” and were the lowest of the low.

Ausweis Ausweis A Reality-Hacking Experiment. The world's changing. We're getting so concerned with the descriptions and symbols that represent ideas, we're losing all contact with the substance. Set Up a Geeky Media Center that Non-Geeks Can Actually Use You need Win7 MC, 7MC, if you want to record ClearQAM TV. The previous MC versions don't do it out of the box without complex hacks. I started trying to build a TV recorder in 2000. 10 Mind-Bending Paradoxes That Will Leave You Stumped Our World Paradoxes can be found everywhere, from ecology to geometry and from logic to chemistry. Even the machine you’re using to read this list has paradoxes of its own. Here are 10 explanations of some of the lesser-known (yet still fascinating) paradoxes of the world. Some concepts are so counterintuitive that we just can’t wrap our minds around them. 10The Banach-Tarski Paradox

Ghost Quiz In 1885, Cecilia Garrett Smith and a friend were experimenting with automatic writing using a primitive Ouija board on which a planchette was guided by a visiting “spirit.” “We got all sorts of nonsense out of it, sometimes long doggerel rhymes with several verses,” but the prophecies they asked for were rarely answered. When they asked who the guiding spirit was, the planchette wrote that his name was Jim and that he had been Senior Wrangler at Cambridge. How to Build a Solar Heating Panel with Soda Cans If you’ve got good sun exposure on one side of your house, you can take advantage of free heat from the sun with this DIY solar heating panel, which uses old soda cans to collect and transfer the sun’s energy into your house. Sometimes, low-tech solar devices are much better than high-tech ones for home use, as they not only tend to be cheaper to make, but will also last much longer before any repairs or maintenance are necessary. And even better, they can be built in part from repurposed or recycled components, which is something you don’t see very often in new solar devices.