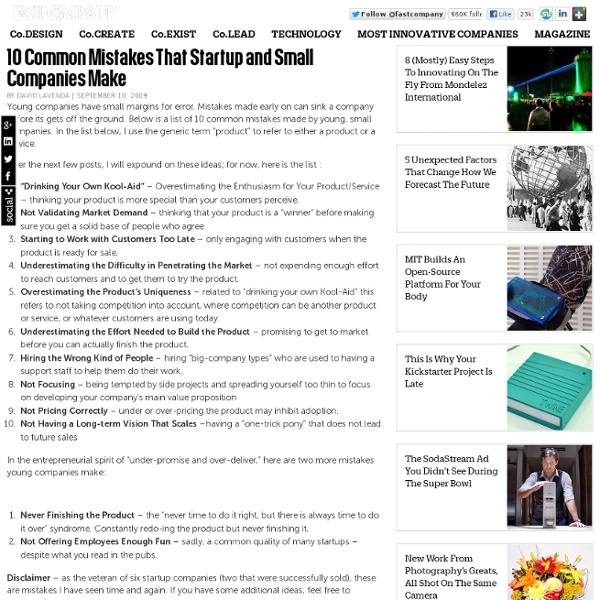 Young companies have small margins for error. Mistakes made early on can sink a company before its gets off the ground. Below is a list of 10 common mistakes made by young, small companies. In the list below, I use the generic term “product” to refer to either a product or a service. Over the next few posts, I will expound on these ideas; for now, here is the list : “Drinking Your Own Kool-Aid” – Overestimating the Enthusiasm for Your Product/Service – thinking your product is more special than your customers perceive. In the entrepreneurial spirit of “under-promise and over-deliver,” here are two more mistakes young companies make: Never Finishing the Product – the “never time to do it right, but there is always time to do it over” syndrome. Disclaimer – as the veteran of six startup companies (two that were successfully sold), these are mistakes I have seen time and again. Related:  Ideas & Negocios

The 5 Things I'd Tell My 21 Year Old Entrepreneurial S... 12 years ago I set out on my first foray into the world of entrepreneurship. The company was called MCSETutor.com (we later changed the name to the equally obtuse 2000Tutor.com) and while it wasn’t a huge success by dot com era standards we did sell it for a tidy profit. But looking back I’m shocked at how little I knew about entrepreneurship. As I’m sure any entrepreneur would love to do, I’d give anything to step back in time 12 years and have a chat with my 21 year old self. And while I can’t do that I do love to share lessons with as many young entrepreneurs as I can. #1 – Take as much risk as you can as early in life as you can. I’m not talking stupid risks. #2 – Nail the fundamentals. Take some of that time and use it to build skills that will make you more effective and productive the rest of your life. #3 – Surround yourself with people who expect you to succeed in a big way. “You are the average of the five people you spend the most time with.” I’m lucky. Fantastic.

WorkHappy.net: killer resources for entrepreneurs 20 Ways To Create Million Dollar Ideas post written by: Marc Chernoff Email Big companies like Apple, super successful websites like Facebook, and bestselling books like The 4-Hour Workweek all have one thing in common: They begin with a million dollar idea. The big question is: How did their creators come up with these ideas? The answer is: Spontaneity and luck had little to do with it. In this article, we’ll take a brief look at 20 tried and true techniques that some of the brightest and most successful entrepreneurs have used to generate million dollar ideas. You don’t need to have a 100-person company to develop and execute a good idea. - Larry Page (Google) Generate lots of ideas. – The more ideas you create, the more likely you are to create an idea worth a million bucks.Fail a lot. – All of the ideas that don’t work are simply stepping stones on your way to the one idea that does. Photo by: Noah Coffey If you enjoyed this article, check out our new best-selling book.

How Long Does it Take to Build a Technology Empire? Have you ever seen a business plan with hockey stick revenue projections? It’s common for VCs to receive business plans showing sales growing from 0 to $100m in the first 5 years of a company’s life. In fact, growth conversations between VCs and management teams often cause angst. One of the reasons is that people from both groups tend to have unsubstantiated beliefs about how long it takes to build an important company. Maybe these conversations would be easier if we simply knew how long it takes to build a successful company? Dashboard at 570 <br /><a href="#"><img alt="Dashboard at 570 " src=" height="100%" /></a> The answer is shown in the visualization. The data are packed with interesting stories. Most successful technology companies aren’t rocket ships. Only 28% of the nation’s most successful public software empires were rocketships. The fastest rocket ship of today’s software industry was Novell.

36 Startup Tips: From Software Engineering to PR and More! This is a collection of startup tips covering software engineering, infrastructure, PR, conferences, legal and finance. They describe best practices for an early-stage startup. We hope that you will find these tips useful, but also please remember that they are based on subjective experiences and not all of them will be applicable to your company. These tips originally appeared as separate posts on the BlueBlog, the blog of AdaptiveBlue. [Ed: Alex Iskold is founder and CEO of AdaptiveBlue, as well as being a feature writer for RWW.] Since the posts were quite popular, we decided to share them with the ReadWriteWeb audience during the holiday season. 8 Software Engineering Tips for Startups Since software is at the heart of every modern startup it needs to be elegant, simple and agile. Tip 0: You must have code Working code proves that a system is possible, and it also proves that the team can build the system. Tip 1: You must have a technical co-founder Tip 6: Cultivate an agile culture

How to negotiate better than 99% of people In college, I had the opportunity to teach a “Student-Initiated Course,” or basically a course on whatever I wanted. So I got together with two of my friends and we put together a course on religious studies. Now, Stanford gave us incredible flexibility to teach essentially whatever we wanted…but the student instructors never got letter grades — it was always Pass/No Pass (everybody always passed), issued by the sponsoring professor. Until we came along. You see, I was never the smartest person in any school I attended. We would basically write our own ticket! One of my co-instructors was amazed that I convinced the sponsoring professor to agree. But my other co-instructor hesitated. To give you some context, this guy was a PhD student in Computer Science at Stanford and had previously attended IIT, one of the most competitive technical universities in the world. “Dude,” I said, “what’s your problem? “No, Ramit,” he said, “I don’t know about this. “What the hell?” I just stared at him. 1. 2.