Hijacking Emotion Is The Key To Engaging Your Audience 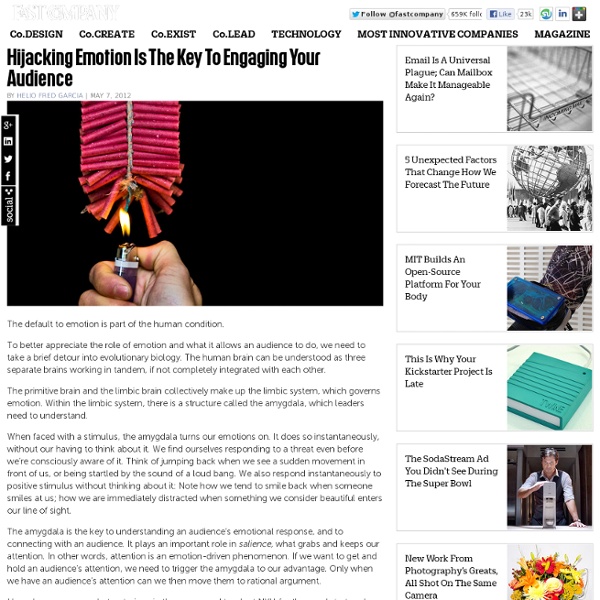 The default to emotion is part of the human condition. To better appreciate the role of emotion and what it allows an audience to do, we need to take a brief detour into evolutionary biology. The human brain can be understood as three separate brains working in tandem, if not completely integrated with each other. The primitive brain and the limbic brain collectively make up the limbic system, which governs emotion. Within the limbic system, there is a structure called the amygdala, which leaders need to understand. When faced with a stimulus, the amygdala turns our emotions on. The amygdala is the key to understanding an audience’s emotional response, and to connecting with an audience. I have become somewhat notorious in the programs I teach at NYU for the way I start each class. Five Strategies for Audience Engagement Establish connection before saying anything substantive. The default to emotion is part of the human condition. [Image: Flickr user Howie Le] Related:  interesting/random

Difference Between Efficiency and Effectiveness | Difference Between | Efficiency vs Effectiveness Efficiency and effectiveness are both commonly used management terms. Yet, while they sound similar and start with the same letters, they both mean different things. Efficiency refers to doing things in a right manner. Scientifically, it is defined as the output to input ratio and focuses on getting the maximum output with minimum resources. Effectiveness, on the other hand, refers to doing the right things. Efficiency is concerned with the present state or the ‘status quo’. In order to be efficient time and again, discipline and rigor is required. Since efficiency is about doing things right, it demands documentation and repetition of the same steps. Efficiency will look at avoiding mistakes or errors whereas effectiveness is about gaining success. In the earlier days of mass production, efficiency was the most important performance indicator for any organization. : If you like this article or our site.

Colorful Umbrellas Magically Float in Mid-Air Flickr photographer Patrícia Almeida recently shot these great photos of a wonderfully whimsical umbrella art installation in Portugal. Like something out of a fairy tale, the umbrellas look almost like they're magically floating in mid-air. As she writes, "In July, in Águeda (a Portuguese town), some streets are decorated with colorful umbrellas. I felt like a kid, amazed by all that color!" She calls it Umbrella Sky. Love this kind of outdoor art. Update: According to the Daily Mail, this installation is an initiative by the council in Agueda, Portugal and is a part of an art festival called Agitagueda. In addition to those photos, here are some by Diana Tavares. Gorgeous, isn't it?

9 Human Behaviors That Still Can’t Be Explained When you were a little kid, you probably got on your parents' nerves quite a few times by responding to everything they said with the word "Why?" Most of their responses involved breaking down the way the world works or the importance of eating your vegetables until they devolved into the classic parent answer, "Because!" But if you asked your mom or dad about the following nine normal human behaviors, they genuinely wouldn't be able to answer you (and would probably make something up) because even the brightest minds in science still aren't sure why we do these things. You probably didn't realize we were all so mysterious, did you? Laughing You laugh at jokes. You laugh at guys getting kicked in the crotch. We hope you will never experience this sensation, but it's one of the most mysterious phenomena that happens to humans.

20 Ways to Use Color Psychology in Your Home When you approach home design, you likely do so in a couple of different ways – choosing objects and colors that simply look attractive or using an existing pattern or decor theme to govern your decisions. However, color is a powerful tool that can be used to inspire emotions, create space illusions or simply set the mood and atmosphere for any particular room. Especially when used with interior and exterior painting, color psychology is a great way to create a healthy and beautiful home. The following are 20 ways to use color psychology in your home. 1.) 2.) 3.) 4.) 5.) 6.) 7.) 8.) 9.) 10.) 11.) 12.) 13.) 14.) 15.) 16.) 17.) 18.) 19.) 20.) BIO: This article was written by Philip Rudy who helps to run and maintain a painting contractor website.

The Trouble with Gerrold: Artificial stupidity (Page 1 of 3)Recently, I got sucked into a discussion of sentience and whether or not such a condition could be achieved in silicon. I said I wasn’t sure it had been achieved yet in meat. But I do remain optimistic that it’s possible. The problem with creating sentience in silicon—or meat—is that first we need to understand the goal. I dislike the term “artificial intelligence.” The problem with discussing “sentience” is the same problem that occurs with discussing “intelligence.” I’m fussy about language. But more than that, I think language processing is where intelligence, and ultimately sentience, occurs. Even more pernicious, we can move so enthusiastically into those linguistic domains that we forget that we created them ourselves.

Michigan Web Design & Internet Marketing Agency | Whole Brain Group "Organ-On-A-Chip" May Put PETA Out Of A Job There are people, including those in PETA, who vigorously protest the use of animals in clinical trials. Many scientists understand why the practice is hated and would probably switch to something else if they could. In their mind, it’s more humane to use animals instead of humans when testing new drugs. Like all problems, however, science may have found a solution. Researchers at the Wyss Institute for Biologically Inspired Engineering are currently developing what they call an “organ-on-a-chip.” The video below explains the first of these “organs-on-a-chip” with a microchip that mimics the functions of a human lung. Lung on a Chip — Wyss Institute from Wyss Institute on Vimeo. The most amazing thing about this breakthrough is when they introduce white blood cells and bacteria into the “lung.” Of course, the law requires that all medicine go through actual human testing as well before being sold. [h/t: Science Friday] “Organ-On-A-Chip” May Put PETA Out Of A Job

Before I Die What matters most to you Interactive public art project that invites people to share their personal aspirations in public. After losing someone she loved and falling into depression, Chang created this experiment on an abandoned house in her neighborhood to create an anonymous place to help restore perspective and share intimately with her neighbors. 2011, New Orleans, LA. Cordoba, Argentina. Najaf, Iraq. Brooklyn, NY. Almaty, Kazakhstan Savannah, GA. Pohang City, South-Korea. San Francisco, CA. Johannesburg, South Africa. Cordoba, Argentina. How to Listen When Someone's Upset When our loved-one erupts in anger and frustration, the last thing most of us think to do is to pour fuel on the fire by telling them they feel angry and frustrated. Yet when done , providing someone emotional validation can have extremely surprising results that strengthen relationship bonds. We've all been in situations in which a loved one is incredibly upset. It is often hard to know the best way to react in such scenarios. Our instinct is to try and calm them down but that is not easy to do and it might even be risky. The idea of fanning the flames by telling the person in question they have every right to feel irate or livid seems counterintuitive. Emotional validation is something we all seek and crave far more than we realize. However, getting things off our chest by telling others about our feelings is not always satisfying or cathartic. What we seek when venting to others is for that person to 'get it', to understand what happened to us and why we feel the way we do. 1. 2.

6 Keys For Turning Your Company Into A Design Powerhouse While design has always been fundamental to industries such as fashion and consumer electronics, it has now spread to nontraditional settings such as airlines, consumer goods, and even governments, where it has become the driver for differentiated end-to-end customer experiences as well as innovation. That’s no longer news: Today, most executives recognize that design can be a source of competitive advantage. What most executives don’t recognize is how to manage design strategically, how to use it to win in their industry, and how high-performance design organizations are organized to deliver great results. After years of leading assessment and change management efforts at global corporations, here’s what I’ve figured out that leaders need to know to start to build design into the DNA of their organizations. Align goals and strategy. The most effective design organizations set goals that are aligned with their organization’s corporate strategy. Great design leadership is important.