Thing in a Jar 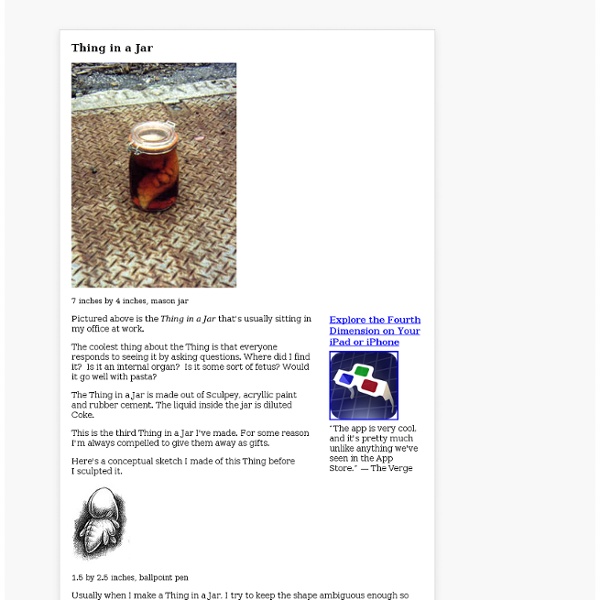 Thing in a Jar 7 inches by 4 inches, mason jar Pictured above is the Thing in a Jar that's usually sitting in my office at work. The coolest thing about the Thing is that everyone responds to seeing it by asking questions. Where did I find it? Is it an internal organ? The Thing in a Jar is made out of Sculpey, acryllic paint and rubber cement. This is the third Thing in a Jar I've made. Here's a conceptual sketch I made of this Thing before I sculpted it. 1.5 by 2.5 inches, ballpoint pen Usually when I make a Thing in a Jar, I try to keep the shape ambiguous enough so that the viewer cannot really pin down exactly what they're looking at. The glass jar acts as a physical barrier, preventing the viewer from directly accessing its contents. I think this is much cooler than, for example, a painting, which basically has this big implicit sign hanging off of it that says, "I am just a painting of an object, not the object itself. Viewers of The Thing in a Jar do not have this preconception.

Arrow bracelet - #2 Friendship Bracelet Tutorial After you've done a few successful strip bracelets (pattern 1), you're ready to do the arrow one (chevron, #2). For this bracelet you need to know both forward and backward knots. When you're doing the arrow bracelet, you need two strings of each colour. That means that when you're doing a bracelet from eight strings, you need four colours.

Easy, Do-It-Yourself Ghost Today is a good time as any to scare your friends. And here’s a new trick on how to get a few good screams. You simply need the fence you would normally use around your house. This should be easy to shape and stand up on its own. Now simply follow the pictures, shaping is the easy part. 4 Bizarre Experiments That Should Never Be Repeated by Megan Wilde 1. The Real World: Mental Hospital Edition This is the true story of three schizophrenics, who all believed they were Jesus Christ. It wasn’t long before they stopped being polite and started getting real crazy. In 1959, social psychologist Milton Rokeach wanted to test the strength of self-delusion. Gift Ideas for Poor Creative Souls (12) Posted by: Cathy on Jun 03, 2012 Tagged in: Untagged Summer Lights Garland I loved this idea and who would not love to receive this pretty gift.

Lots of Jokes - Did You Know? Q. Why do men's clothes have buttons on the right while women's clothes have buttons on the left? A. When buttons were invented, they were very expensive and worn primarily by the rich. Some Bizzare and Odd things around us… Beauty of the nature lies in viewer’s eyes. A photograph is just a way to show or represent that beauty. Here is a bunch of some wonderful pictures which are not only the example of beautiful photography but are also a photograph of some miracles happening in the world. You can also call it the creativity and innovation of photographer’s mind. I think it was at the peak while taking these pictures. Some photographs are just the example of wonder created by God.

The Hipster Home » Blog Archive » How to Make a Tiny Terrarium in a Light Bulb Ahoy there Hipster Homers! I’m Julie and I’m the very first guest blogger on this fine site. Today’s project involves breaking stuff, plants, found objects, and miniatures. Cuddling the Opposition: A Campaign for Free Speech in Belarus Relies on Teddy Bears and Parachutes - News The small former-Soviet republic Belarus is considered to be Europe's last surviving dictatorship. Protestors and the political opposition are jailed. Journalists are harassed. Telephone Songs Useless Office Skill #163 This is for all of you frustrated musicians...who want to turn all of us into frustrated listeners. ...You can play music on your phone by pressing the buttons on the top (1,2,3)...and along the side (6,9,#). But don't play the 4,5,7,8,*, or 0. They sound even worse than the others. Happy Birthday 112163 112196 11#9632 969363

How To Mix Chalkboard Paint in Any Color We love using chalkboards as backdrops for displays and parties (like this one here!). So we were super excited to learn that you can create your own custom colors-and it's really easy! We first learned how from Martha Stewart whose tutorial you can read here.

100 Things Personality Test - VisualDNA VisualDNA brings a new layer of information to the world of technology that will help bring it closer to the people who use it – making it more enjoyable and relevant. Technology provides businesses with a surfeit of DATA – what and when. However it provides very little in the way of UNDERSTANDING – who did things, and why they did them. We see this effect in all areas of business from marketing to financial services. Despite all the targeting and site metrics, digital marketing isn’t getting any more effective. And despite all the data gathering there’s a limit to what credit histories can tell financial services about customers and potential customers. How to cut glass I posted a picture about 1 week ago on Instagram, Facebook and Twitter of me cutting glass using just string. I got LOT’S of requests for a tutorial on how I DID THIS! So here it is.

Heckling Hitler: 15-plus attempts to make the Führer funny 1. The Producers (1968)Adolf Hitler was a madman, a bigot, a dictator, and a cautionary example of how one man can induce a genocidal mass hysteria. So what, we can’t laugh at the guy? Popular culture is packed with examples of comedians trying to rob the Führer of some of his mystique by openly mocking him. In one of the most meta instances of Hitler hilarity, Mel Brooks wrote and directed a film he originally wanted to call Springtime For Hitler, after the name of the show within the show. The movie—renamed The Producers at the behest of skittish backers—stars Zero Mostel as a bumbling Broadway producer and Gene Wilder as an accountant who comes up with a plan to make money by soliciting investors for a surefire flop.