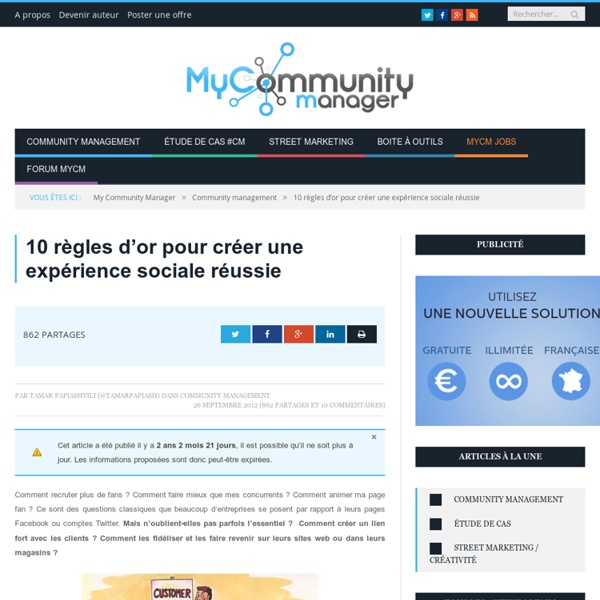 6 Social Media Trends You Should Not Ignore in 2013 We survived the predicted but misguided myopian Mayan catastrophe, the impending fiscal cliff and fluorescent running shoes. Going to the gym now is like watching an outbreak of mad highlighter pens as the fluoro epidemic becomes mainstream. Is it a trend or a fad? Only time will tell. 5 Twitter Tools to Enhance Your Marketing Are you looking for new and creative ways to use Twitter? Here are 5 lesser-known Twitter tools that your business should be using. Each of these tools has unique capabilities that may . Oh, and all of . Does The World Need More Social Media Analytics? Kima Ventures Invests €100K In ShoorK I’m not sure the world is crying out for more social media analytics, but France-based Kima Ventures obviously thinks it is. Today, the early-stage VC fund owned by Xavier Niel and Jeremie Berrebi, has announced that it’s invested €100,000 in the French startup ShoorK, which is developing a range of social media analytics tools for brands, community managers and agencies. This first round of financing will be used by ShoorK to accelerate the development of its products and “position itself strongly” in the Social Media Analytics market, says the company.

How to Determine Which Social Media Network Fits Your Business There are numerous variables that go into running a successful social media campaign. Factors like quality and frequency of posts, along with proper engagement quickly come to mind. These are obviously important, but choosing the network that caters to your target audience is equally important.

Online Social Media Principles Countless conversations take place online about every day, and we want our Company’s more than 150,000 associates in more than 200 countries to join those conversations, represent our Company, and share the optimistic and positive spirits of our brands. These Social Media Principles should guide your participation in social media, both personally as well as when you are acting in an official capacity on behalf of the Company. It is critical we always remember who we are –the world’s largest beverage company, refreshing consumers with more than 500 sparkling and still brands – and what our Company’s role is in the social media community – to inspire moments of optimism and happiness and build our brands. The same considerations that apply to our messaging and communications in traditional media still apply in the online social media space, including on what you might consider “internal” platforms.

Sites See Results from Social Sharing Buttons One way websites and content publishers can get readers and consumers to share their content is to make sure there are easy ways to do so, including buttons on the homepage for sharing on Facebook, Twitter, LinkedIn and now Google+. SEO platform BrightEdge Technologies studied the top 10,000 websites for its “Social-Share Analysis: Tracking Social Adoption and Trends” report in August 2011. It looked at how many sites included these social links or plugins on their homepages and found that more sites are using such sharing tools in 2011, with 53.6% of the top 10,000 websites including at least one social link or plugin. This is up from 52.8% in 2010. Facebook is the most popular sharing tool on website homepages, with 50.3% of sites studied containing a Facebook share button, according to the study.

Report: Pinterest Beats Yahoo Organic Traffic, Making It 4th Largest Traffic Driver Worldwide Although reports trickling in are raising questions around Pinterest’s ability to convert its network of enthusiastic photo sharers to e-commerce shoppers, the site itself is still growing quickly. According to new data released by Shareaholic this morning, Pinterest has beaten out Yahoo organic traffic, making Pinterest the fourth largest traffic driver worldwide. In addition, the company found that Google, Yahoo, and Bing organic traffic decreased by 15.63% on average since January, which the firm speculates may indicate more people are discovering content through social sites like Pinterest. But it could also be because Shareaholic’s data, which comes from a network of 200,000 publishers using its social sharing and content analysis tools, is more likely to reflect an engaged community where people are comfortable with using social networking sites to perform searches.

Why Are Retailers Shutting Their Facebook Stores? Eager to monetize the large followings they had built on Facebook, many large brands set up shop on the social network for the first time last year. Now many of those Facebook stores are closing. A Bloomberg report this weekend pointed out that Gap, J.C. Penney, Nordstrom and GameStop have all opened and closed shops on Facebook within the past year — undermining expectations that the social network will become a major revenue driver for retailers over the next decade.

6 Posts That Build Engagement on Facebook Aaron Lee is the social media manager at Binkd Promotion, a comprehensive platform for social media marketing through digital promotions and contests. He also writes social media tips on the Binkd Blog. Follow him at @AskAaronLee. When Mark Zuckerberg ﬁrst built Facebook, the purpose of it was to keep people connected with their friends. That was its ﬁrst purpose. And it worked well.