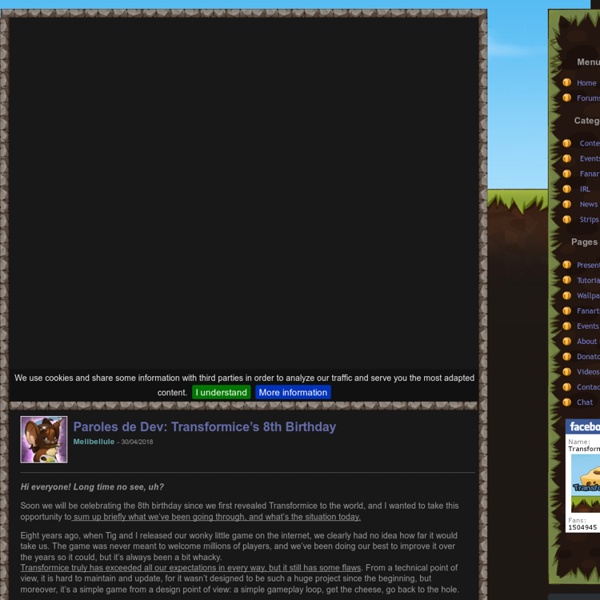 Remember Jingle? After hosting the spectacular Christmas 2010 party, he went on a vacation exploring places all around the world. I’m sure several lucky mice had the pleasure to meet him; share your exciting stories on the forums if you did! Jingle is now back and welcomes you to his modest abode for Christmas. Don’t forget to bring some milk and cookies for Santa Maus and his reindeers! Unwrap your presents on Jingle’s home to win new hats or share them with other mice to unlock christmas titles!

Akodomon Samurai: Way of the Warrior was featured in Best Games of 2009 by Apple – Samurai II is a true successor, aided by over a year of focused development. Overall production values and vicious action put Samurai II on par with console 3D brawlers. Screenshots don’t do Samurai II justice – the fluid action has to be seen running at 60 frames per second. But looks alone won’t carry a game – the developers listened to fan feedback and improved gameplay throughout. 100 Of The Best Free Online Flash Games Topics: 100 of The Most Popular Flash Games , Best Casual Games , Best Games of 2011 , Browser Games , Top Online Games Hey guys, I must have spent countless hours playing games this summer.. Through all the games I played and were recommended to me, I thought I would like to share a list with all of you. I gathered the top 100 online flash/casual games and made a list. The following games are some that went viral. I tried to keep most of the games from between 2010-2011, however I did include some classics as well.

Beyblade Metal Fusion 2 - Basalt Horogium 145WD BB-104 Please read the full listing. By clicking Confirm bid you commit to buy this item from the seller if you are the winning bidder. You will enter a binding contract. Place bid Role Playing Games Online - Play Free Multiplayer RPG Adventure Games Astro Lords is an MMORPG/Strategy set in a sci-fi universe. Players control an asteroid, construct and upgrade buildings and fight with others to gain control over the Oort cloud. The game can be played on iOS, Android and desktop devices. Players might be positively appalled by the lack of character customization, but that is more than compensated by the fact that eventually you can move your base, perhaps towards the members of your alliance, or the enemy if you feel you can gain an edge.

USS Enterprise Refit [UPDATED FEB3 + YOGSCAST!] 58oP0WJn3BM Download I originally built this ship on a SMP server and finished it about a month ago. I've been sitting on it for awhile and I've finally put it all together as a playable single player level. This is my second attempt after a server map reset so it's the "NCC-1701-A" registration. (Also The Undiscovered Country was be best movie) Pixel Dungeon 4.5 out of 5 stars - MeAndMyDroid.com Deadly Dungeons is a first person RPG developed exclusively for the Android platform. This Android RPG is influenced by classic dungeon crawler games such as Dungeon Hack, Eye of the Beholder, and Nethack. Your purchase supports indie games development. After being separated from your adventuring party, you must navigate a deadly dungeon, and fight your way through hordes of creatures in a desperate attempt to escape alive. What first begins as a simple escape to the surface turns into a fight for survival, a confrontation with an ancient evil, and a descent to hell itself.

Exorcist-Fantasy 3D Shooter "Gun Strike 3D" is a high-level 3D FPS game.Incarnation of the game you will be brave soldier, to experience the true absolute hot stimulating shootout.From the Desert Eagle to AK47 and sniper, as you have access to a variety of light and heavy weapons, as well as powerful grenade too!In the game you can not only choose in the hot desert combat, you can also ice cold in the city to fight, I believe this variety of terrain will be able to ignite the passion of your research.Quickly pick up their weapons, the end of the line of fire, etc. you through! Game Features:**The overall feel of the game shooting game with CS are very similar, but they are not the same feeling of playing together, using a simple fighting style, novice players can immediately get started!

[Adv] The Redmurk Mystery The Redmurk Mystery Current version seems to work fine with Minecraft 1.1 from what I can see. If you spot anything; please let me know. Setting: You have arrived at the remote port town of Redmurk, surprisingly there appears to be no one around and further exploration reveals the town to be empty. A look around the nearby homes shows signs of struggle yet there are no signs of battle or disaster. Play For Free © 2014 Trion Worlds, Inc. Trion, Trion Worlds, RIFT, Storm Legion, Telara, and their respective logos, are trademarks or registered trademarks of Trion Worlds, Inc. in the U.S. and other countries. The ratings icon is a registered trademark of the Entertainment Software Association.

5 Surprisingly Deep Free Browser-Based Strategy Games What makes for a good strategy game? Look around any corner of the web and you’ll find no shortage of “strategy browser games,” but many of them don’t actually require much strategy. In fact, where strategy is concerned, the deepest games tend to be the ones we don’t expect. Strategy should not be confused with complexity. [Adv] Forgotten Temple (v1.7 Final) Please also look at my new project - "Dimension of DooM". The Forgotten temple - Adventure type map. This map is one of the few adventure type maps available now. You can download it and try to solve all puzzles and clear all challenges! So far it has about 25 min of gameplay and many interesting and unexpected puzzles (including things that were added in latest updates). More then 130.000 downloads so far, more then 200 lets plays on youtube, the most known adventure map there is!

[Adv] Four Towers Adventure Dungeon Map Welcome to Master of the Arena! This is an action packed fully automated, mob spawning, ground pounding, lava flowing, round counting experience. In order to defeat this map you will need to keep moving and of course kill gobs of mobs as the doors open and close with a full array of monsters. To become the Master of the Arena you must survive all 9 rounds without dying. Inotia3 : L'Apprenti de Carnia ★★2nd place for the 2011 Best App Ever Awards - RPG Game★Selected as Google Play’s Featured Game of August 2011!! Protect your loved ones in Carnia by joining the adventure!What would it take to change a warrior's destiny? The Big Adventure RPG! Inotia3: Children of Carnia! This game is free to play, but you can choose to pay real money for extra items.

[Adv] Prof. Grizwald and the Curse of the Pyramid Looking good there! However, there's a rule alot of people handle: 'pictures or it didn't happen'. Those are mostly the people that pee in their pants, fearing for virussus on each single thing, but ofcoarse there are other reasons: People want to know what they download.

my name is inzaguiz i play sometime at this game and i frensh (That is obvious?) by inzaguiz Jun 11

I like that my name is cassyzippo en yours??? by zippo Jun 10