Ofsted 2012: Questioning to promote learning — From Good to Outstanding 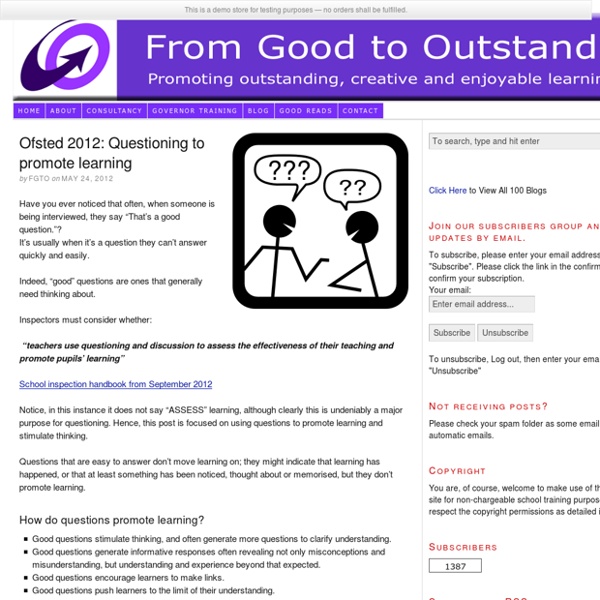 Have you ever noticed that often, when someone is being interviewed, they say “That’s a good question.”? It’s usually when it’s a question they can’t answer quickly and easily. Indeed, “good” questions are ones that generally need thinking about. Inspectors must consider whether: “teachers use questioning and discussion to assess the effectiveness of their teaching and promote pupils’ learning” School inspection handbook from September 2012 Notice, in this instance it does not say “ASSESS” learning, although clearly this is undeniably a major purpose for questioning. Questions that are easy to answer don’t move learning on; they might indicate that learning has happened, or that at least something has been noticed, thought about or memorised, but they don’t promote learning. How do questions promote learning? Questioning can fail because: Questioning succeeds when: What kinds of questions do you routinely ask, and how do you ask them ? E.g. E.g. T: How might you describe a hexagon? E.g. Applying

How The Memory Works In Learning How The Memory Works In Learning By Dr. Judy Willis, M.D., M.Ed. Teachers are the caretakers of the development of students’ highest brain during the years of its most extensive changes. As such, they have the privilege and opportunity to influence the quality and quantity of neuronal and connective pathways so all children leave school with their brains optimized for future success. This introduction to the basics of the neuroscience of learning includes information that should be included in all teacher education programs. Teaching Grows Brain Cells IQ is not fixed at birth and brain development and intelligence are “plastic” in that internal and environmental stimuli constantly change the structure and function of neurons and their connections. It was once believed that brain cell growth stops after age twenty. High Stress Restricts Brain Processing to the Survival State Memory is Constructed and Stored by Patterning Memory is Sustained by Use The Future References Ashby, C.

He's not the messiah .. - news Comment:5 average rating | Comments (2)Last Updated:23 September, 2012Section:news … but for many policymakers he comes close. John Hattie, possibly the world’s most influential education academic, has the ear of governments everywhere. Professor John Hattie is, quietly, one of the most divisive figures in world education. For someone reputed to be unafraid to speak his mind, Hattie is remarkably blase about both points of view. So what is it that has made Hattie - often referred to the world’s most important educational researcher - the focus of such global attention and controversy? Speaking from Australia, where he has been director of the Melbourne Education Research Institute at the University of Melbourne since March 2011, Hattie initially comes across as relaxed and laid back. It is this characteristic outspokenness that has galvanised many of Hattie’s fiercest critics. Hattie’s confidence in his statements is well founded. Following the evidence “There are critics out there.

Home | Global Digital Citizen Foundation 6 different ways of getting student feedback in your iPad lesson. Update 14-09-2012: Syncing Notability with Dropbox is possibly the easiest and best way of keeping track of your students’ work. One of the most difficult challenges for the teachers at my school is changing from workbooks and worksheets to get students to work and monitor their answers on the iPad. There are many ways to go about it. 1. This one, is my go to tool form creating questionnaires. 2. In my mentor class last year there were almost no students who did not have a twitter account. 3. Socrative allows you to fire questions at students in a game like setting. 4. iBooks Widgets I’ve previously written a post about making worksheets in iBooks. 5. Nearpod is the most advanced educational app I have used yet. 6. Keynote is often overlooked as a workbook app. Related posts:

Mnemonic Dictionary - Fun and easy way to build your vocabulary! Using @Evernoteschools for Lesson Planning Since I started this Experiment to use Evernote in every aspect of my classroom, I wasn't really sure what I was going to discover. I was sure there would be some way that Evernote was not going to meet my needs and I would be forced to add another tool to my chest while I continue the experiment for the school year. One way I was weary of was lesson planning. I have used the the traditional planner book for years and it has always been very good to me. I could easily flip back and see what I what I did the year before as I planned the upcoming school year. Here is a shot of my desktop version of Evernote. Within the notebooks for the specific classes, I have scanned and uploaded various assignments I had in paper form only and added them to new notes. Since all of my students will have Evernote accounts, I can easily share the assignments with the students in specially created notebooks. I have also created notebooks that contain notes on tech tips for using the various tools.

Augmented Reality in English Language learning | ELT MATERIALS I recently attended Interfacing with Public Space: Embodied language learning with mobile technologies a workshop delivered by Paul Driver who is an educational technologist and co-author of Language Learning with Digital Video series. During the workshop I got introduced with a free augmented reality application Aurasma and how it is used to create and design learning materials for classes. Augmented Reality (AR) is defined as ”a variation of Virtual Environments (VE), which allows the user to see the real world, with virtual objects superimposed upon or composited with the real world.” AR-based mobile learning material helps engage learners in numerous learning activities. For example, Liu & Tsai (2013) investigated the use of augmented reality materials to develop writing skills in EFL classes. they used global positioning and AR techniques. The students were asked to introduce their campus. ( The above picture is taken from Liu & Tsai study: shows the AR application) References

Seating plans Excel blog UPDATE September 2013The day after I created and shared this sheet in my department (June 2013) a copy was seen by one of our SLT - I was asked to share it at the following morning's whole school briefing. Since then it's been used by a large number of teachers across the school. It has also been downloaded from the TES website almost 350 times, and I know it is in use in several other schools.I've just been asked by our headteacher (new since September) to share it again across all staff at our school on Monday.The version now available via the link below has been updated following feedback from use both in my department and beyond - it includes the ability to display more data on the plan and seat more students. Original post... Background For all sorts of reasons it's really useful to have student data visible on teacher copies of seating plans. This data will then be placed into correct place in the seating plan tab depending on where you put each individual pupil's number.

Cool Tools for School | Its all about the learning! Learning First, Technology Second The Educator’s Guide to Designing Authentic Lessons By Liz Kolb By Liz Kolb Learning with technology doesn’t happen because a specific tool “revolutionizes” education. It happens when proven teaching strategies intersect with technology tools, and yet it’s not uncommon for teachers to use a tool because it’s “fun” or because the developer promises it will help students learn. Learning First, Technology Second offers teachers the professional learning they need to move from arbitrary uses of technology in their classrooms to thoughtful ways of adding value to student learning. This book includes: About the Author Liz Kolb is a clinical assistant professor at the University of Michigan. Media Reviews Kolb’s Triple E Framework is an excellent tool for helping teachers focus on using technology to support learning and not just using technology for its own sake.

Why Schools Should Be Wary Of Free Tech Products -- And Startups Shouldn't Make Them When I was a middle school science teacher, I oftentimes found myself digging into my own pockets to pay for equipment — Bunsen burners, test tubes, dead frogs. And that didn’t change when one-to-one iPad programs in schools became popular; in fact, it added yet another item, software, to my to-buy list. So, you can imagine my excitement when I found free online products, especially those that seemed flashy. It didn’t even cross my mind back then that using free tools (and more importantly, asking my students to use free tools) could be problematic and even potentially dangerous — more so than the free consumer products I was finding online and using in my own time. But in the world of edtech, “free” isn’t only a danger to the users — it’s quickly becoming more and more of a danger to the makers of edtech, as well. To the users: Nothing is really free There really is no so thing as a free education technology product for the user — because what's more valuable than money?