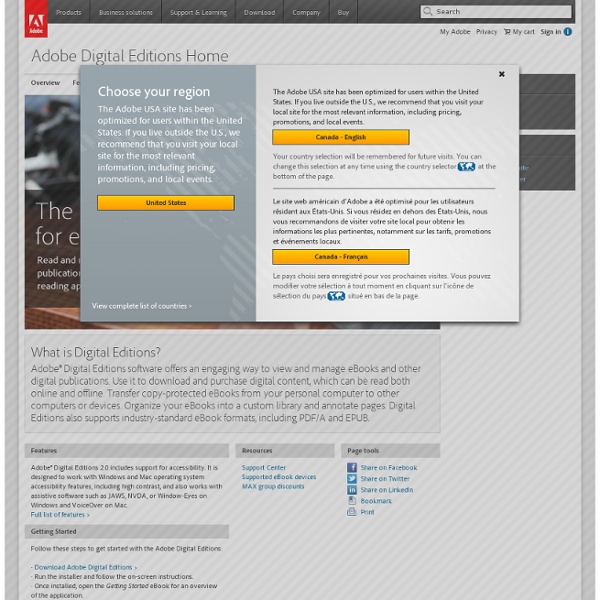 Creative Cloud outage: Adobe ID login failures mean Daily Mail’s digital edition couldn’t be published After being hit by an extended outage yesterday, Adobe’s login system is working again and customers are able to use their Adobe IDs to access the Creative Cloud and other services. For creative customers, being locked out proved frustrating – though workarounds were quick to appear for many issues – but for publishers using Adobe DPS (Digital Publishing System), it was even worse. We’ve heard from companies who were unable to publish their titles while the outage was happening, where the biggest impact was on daily titles such as the Daily Mail’s Mail Plus interactive newspaper, which couldn't publish yesterday – so the title has almost certainly lost much of a day’s advertising revenue. And it appears from the Mail Plus’s Twitter feed that there are continuing problems today.

10 Adobe AIR apps that make you more productive Adobe AIR apps are some of the best designed, most useful applications you can have on your desktop. Last month, I highlighted 10 applications to try out, if you're thinking about using AIR apps . This time around, I want to take a look at 10 apps that will make you more productive. Trust me, they will help you save some time. Be more productive Why not try an Adobe AIR RSS Feed Reader, its worth it : Speckyboy Design Magazine Adobe AIR has recently surpassed well over 100 millions downloads, and its all thanks largely to the many Twitter apps available. Now, I love Adobe AIR, and hate its current reputation that it is seemingly limited to only Twitter. Why is no one downloading the AIR RSS apps? You should be, they are great, just have a look at the list below. AlertThingy – FriendFeed Edition

Famous Adobe AIR Applications Adobe AIR is the technology that causes a revolution in the history of the internet. With Adobe AIR, you can view high dynamic information right on your desktop browser less. This provides an easy access to your favorite shows, application and web sites. 9 Must-Try Adobe AIR Apps for Better Productivity Elliott Kosmicki is the founder of GoodPlum.com, a productivity and personal development blog for home business owners. You can also follow Elliott on Twitter. Adobe AIR came along and changed the application world overnight. Developers could now use their web app knowledge and translate that to an application that ran on a PC, Mac or Linux desktop. For users, such as myself, we all of the sudden had the ability to find desktop apps that we loved, and use them across all of our systems in the exact same way. With this new age of "application neutrality," I wanted to take a brief look into some Adobe AIR apps you have to at least try.

30+ Adobe AIR Apps Adobe's popular AIR runtime is gaining more and more fans, and with that, far more applications than ever that cover a broad spectrum of tools. From fun applications that let you order pizza from your desktop to applications that let you track your investments online and off , the entire spectrum is out there, and this guide should help you find at least one or two that fit your life. Financial and Productivity Agile Agenda - Helps with project management, letting you schedule and assign tasks, assigning priorities and more. Google Calendar RSS Invoice Creator - If you use Google Calendar to track your work on projects, you can use this app to parse your RSS feed and create invoices for your time to send to your clients.