The Anosognosic’s Dilemma: Something’s Wrong but You’ll Never Know What It Is (Part 1) - Opinionator Blog 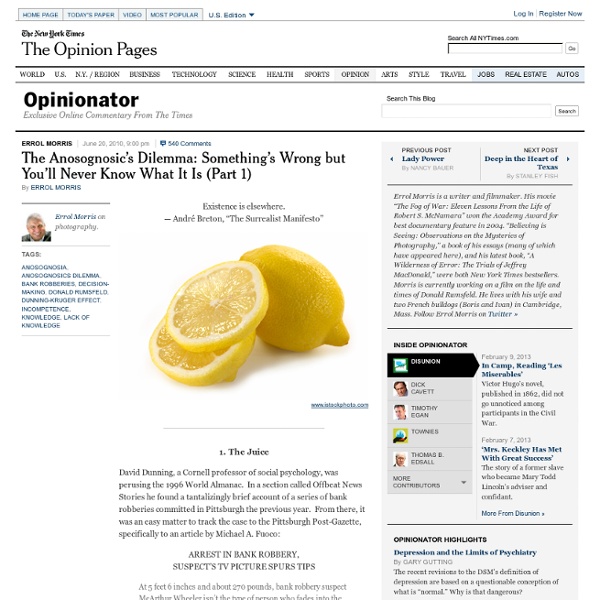 Existence is elsewhere. — André Breton, “The Surrealist Manifesto” 1. The Juice David Dunning, a Cornell professor of social psychology, was perusing the 1996 World Almanac. In a section called Offbeat News Stories he found a tantalizingly brief account of a series of bank robberies committed in Pittsburgh the previous year. At 5 feet 6 inches and about 270 pounds, bank robbery suspect McArthur Wheeler isn’t the type of person who fades into the woodwork. Wheeler had walked into two Pittsburgh banks and attempted to rob them in broad daylight. In a follow-up article, Fuoco spoke to several Pittsburgh police detectives who had been involved in Wheeler’s arrest. (a) the film was bad; (b) Wheeler hadn’t adjusted the camera correctly; or (c) Wheeler had pointed the camera away from his face at the critical moment when he snapped the photo.[2] As Dunning read through the article, a thought washed over him, an epiphany. DAVID DUNNING: Well, my specialty is decision-making. ERROL MORRIS: Why not?

How facts backfire It’s one of the great assumptions underlying modern democracy that an informed citizenry is preferable to an uninformed one. “Whenever the people are well-informed, they can be trusted with their own government,” Thomas Jefferson wrote in 1789. This notion, carried down through the years, underlies everything from humble political pamphlets to presidential debates to the very notion of a free press. Mankind may be crooked timber, as Kant put it, uniquely susceptible to ignorance and misinformation, but it’s an article of faith that knowledge is the best remedy. If people are furnished with the facts, they will be clearer thinkers and better citizens. In the end, truth will out. Maybe not. This bodes ill for a democracy, because most voters — the people making decisions about how the country runs — aren’t blank slates. “The general idea is that it’s absolutely threatening to admit you’re wrong,” says political scientist Brendan Nyhan, the lead researcher on the Michigan study.

Logical Fallacies: The Fallacy Files You Are Not So Smart Alchemy Is Back Alchemy is alive and well! Yes, that medieval precursor of chemistry, that chimerical search for the philosopher’s stone and the transmutation of lead to gold. Modern alchemists have found the philosopher’s stone and are selling it and teaching people how to make it themselves out of dew and Celtic sea salt. The philosopher’s stone apparently is an elixir of life that you have to take on a regular basis. Instructions for making it are detailed on this website. It allegedly turns lead into gold: one milligram of the Stone can turn 20 pounds of lead to gold. …the alchemists warned that you must be careful not to transmute too much gold at once, or it will become radioactive and the radiation will harm you and eventually kill you. There are apparently 3 colors of stone. The Red Stone is used primarily for its regenerative abilities: it is not taught. And then there is the Ormus monoatomic alchemical elixir: The secrets of alchemy are no longer secret. Science can’t explain it.

The Myth of Scientific Literacy Every now and again, the term "scientific literacy" gets wheeled out and I roll my eyes. This post is an attempt to explain why. The argument for greater scientific literacy is that to meaningfully participate, appreciate and even survive our modern lives, we all need certain knowledge and skills about science and technology. Ok. But what will this look like exactly, how will you know what we all need to know in advance and how on earth do you expect to get people trained up? Back in the early 1990s, Jon Durant very usefully outlined out the three main types of scientific literacy. Knowing some science – For example, having A-level biology, or simply knowing the laws of thermodynamics, the boiling point of water, what surface tension is, that the Earth goes around the Sun, etc. The second of Durant's approaches to scientific literacy might make more sense then, but there are problems here too. This echos a key problem many people have with the scientific literacy approach.

Choice Blindness | Wired Science  The problem with our sensory world – this “blooming, buzzing confusion” of sights, sounds and smells – is that we put so much faith in it. We believe that the world we experience the world as it is, and that our sensations are an accurate summary of reality. But that’s a convenient illusion. In fact, it is the one illusion that makes every other perceptual illusion possible. I’m most interested in the practical consequences of our sensory flaws. In this latest study, Hall and colleagues sought to extend this phenomenon – it’s known as choice blindness – to the world of smell and taste. Here’s where things get tricky. In a manipulated trial, the participants were presented with the two prepared jars. At first glance, this seems like a ridiculous experiment. And yet, that’s exactly what happened. What’s most unsettling, however, is that we are completely ignorant of how fallible our perceptions are. Image: 99 Cent Store, by Andreas Gurksy

Sensory hijack: rewiring brains to see with sound - health - 17 August 2010 Read full article Continue reading page |1|2|3 Video: Seeing with sound A new device that restores a form of sight to the blind is turning our understanding of the senses upside down CLAIRE CHESKIN used to live in a murky world of grey, her damaged eyes only seeing large objects if they were right next to her. Nowadays things are looking distinctly brighter for Cheskin. As if the signposting of objects wasn't impressive and useful enough, some long-term users of the device like Cheskin eventually report complete images somewhat akin to normal sight, thanks to a long-term rewiring of their brains. The idea of hijacking another sense to replace lost vision has a long history. By the time he died in 2006, Bach-y-Rita had developed more sophisticated devices which translated the camera's images into electrical pulses delivered by a postage-stamp-sized array of electrodes sitting on the tongue. Every second the camera scans a scene from left to right. New Scientist Not just a website! (YouTube)

Last Night's TV: Faith Schools Menace?/More 4 - Reviews, TV & Radio Richard Dawkins, as you may not be hugely surprised to learn, does not buy any of that. His role as presenter and the title Faith Schools Menace? meant that More 4's film about the rise of religious education wasn't one of those programmes you really had to watch to the end in order to discover its conclusions. The most obvious of these was that Dawkins came out in favour of religious literacy. The headmaster of Madani High School was more confident: "If you come to our school and you look at our lessons they are very much open minds," he said, "thinking critically, understanding the world in a very critical fashion." He didn't need to say anything at all to spike the other claim made for faith schools, which is that they contribute to "community cohesion". Darwinism itself didn't get much of a look in here, apart from an intriguing sequence that revealed that young children are innately drawn to purpose-driven explanations of natural phenomena.

US Chamber: Equal Pay “a Fetish for Money,” Women Should “Choose the Right Partner at Home” | Work in Progress Protest at the US Chamber of Commerce | Photo via SEIU/William Melton on Flickr The US Chamber of Commerce has apparently spent too much time watching Mad Men: in a blog post this morning, Chamber blogger Brad Peck called women’s fight for pay equity to be nothing more than a “fetish for money,” and said women complaining about their pay should focus instead on “choosing the right partner at home.” The Chamber’s Peck also approvingly quoted a post that asked, “Should government force gym-man to share his beautiful babes with couch-potato man?” This is all in a post on the Chamber’s blog called: “Equality, Suffrage, and a Fetish for Money.” The Chamber’s Peck first decided to put the terms “full equality” and “pay gap” in scare quotes, which should be enough for one to tell that the Chamber isn’t serious about rights at work for women. Everyone knows that “pay and promotions” are just a small part of why you work. A different battle indeed, one that also centers on choice.

Illusions of bodily awareness adapted for the pub : Neurophilosophy DO you think that you perceive your body and the world around you as they really are? If your answer to that question is “yes”, then think again. Our perceptions are little more than the brain’s best guess of the nature of reality, constructed from fragments of information it receives through the senses. This is demonstrated by visual illusions, which produce discrepancies between physical reality and what we see of it, and by illusions of bodily awareness, which distort the way we perceive our bodies. Psychologists and neuroscientists have long used illusions to investigate the mechanisms underlying perception. The first illusion that I have adapted for the pub is the rubber hand illusion. Simply manipulating the sensory information about the hand in this way causes the subject to perceive the felt sensations as originating in the fake hand and not their real one. Photo: Sophia Collins The photograph above shows it was done. Related: References:

Smart, Qualified People Behind the Scenes Keeping America Safe: 'We Don't Exist' WASHINGTON—Members of the brilliant, highly trained, and dedicated team of elite professionals who work tirelessly behind the scenes to protect our nation and keep its citizens out of harm's way announced Tuesday that they do not exist. "I know most Americans like to believe there are selfless, ultra-intelligent operatives like me out there watching over everything from an underground control room," said the Rhodes Scholar Navy SEAL national security official who for the past 10 years we have all mistakenly presumed to be an actual human being. "Unfortunately, though, I'm not employed by the U.S. government, I'm not working at all hours to foil terrorist plots, nor am I part of some secret network of sharp, capable agents, because no such network exists." "And again, neither do I," the imaginary man added. "Believe me, I wish I existed, too," the fake man added. "I would probably be great."

Friday Illusion: Ball in glass mystery Sandrine Ceurstemont, online video producer It's a simple set-up: a ball appears to be in a glass. But when a hand appears to pluck the ball out, you'll see that there's some trickery involved (see video above). It's the latest illusion filmed by psychologist Richard Wiseman that ties into his new book, Paranormality: Why we see what isn't there. So can you solve the mystery? Click here for last week's illusion. Four animated Pac-man mouths trick you into seeing a pulsing diamond. But that isn't the only process at work. "Extrapolation is the shooting out of a contour: you see a line extending out along the mouth of a Pac-man. By interfering with the illusion to kill one of these mechanisms, the team found that it was still perceived because of the other two processes at work. Thanks for all your comments - the winner of the book is Ismail S., who was closest to the correct answer.