What I remember most about LEGOs 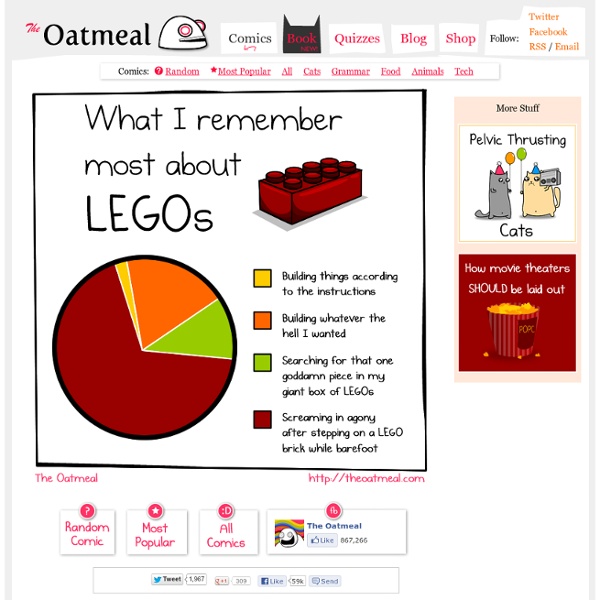 McSweeney's Internet Tendency: Thirteen Writing Prompts. [Originally published May 4, 2006.] Write a scene showing a man and a woman arguing over the man’s friendship with a former girlfriend. Do not mention the girlfriend, the man, the woman, or the argument. Write a short scene set at a lake, with trees and shit. Choose your favorite historical figure and imagine if he/she had been led to greatness by the promptings of an invisible imp living behind his or her right ear. Write a story that ends with the following sentence: Debra brushed the sand from her blouse, took a last, wistful look at the now putrefying horse, and stepped into the hot-air balloon. A wasp called the tarantula hawk reproduces by paralyzing tarantulas and laying its eggs into their bodies. Imagine if your favorite character from 19th-century fiction had been born without thumbs. Write a story that begins with a man throwing handfuls of $100 bills from a speeding car, and ends with a young girl urinating into a tin bucket.

If World War I Was a Bar Fight | 10 Times One Germany, Austria and Italy are standing together in the middle of a pub when Serbia bumps into Austria and spills Austria’s pint. Austria demands Serbia buy it a whole new suit because of the new beer stains on its trouser leg. Germany expresses its support for Austria’s point of view. Britain recommends that everyone calm down a bit. Serbia points out that it can’t afford a whole suit, but offers to pay for the cleaning of Austria’s trousers. Russia and Serbia look at Austria. Austria asks Serbia who it’s looking at. Russia suggests that Austria should leave its little brother alone. Austria inquires as to whose army will assist Russia in doing so. Germany appeals to Britain that France has been looking at it, and that its sufficiently out of order that Britain not intervene. Britain replies that France can look at who it wants to, that Britain is looking at Germany too, and what is Germany going to do about it? Britain and France ask Germany whether it’s looking at Belgium. The End….

Crunch - Dave's Demolition Service! See more great video on the multimedia page! Video of my car running over stuff! Any requests? Want something crushed?Send me an e-mail describing an item you have whichyou would like to see crushed. If I approve the item,I will send you an address where you can send your doomed item! Gingerbread House! See Crunch Archive for more great crunches! [Home] - [Site Map] - [Donate] - [Car Shows] - [Multimedia] - [Photos] - [Links] - [Contact] Copyright© 2003 StillRuns.com

It’s a Motorcycle! It’s a Sports Car! No, It’s…Snaefell? « Gajitz Call it a tiny sports car with a motorcycle growing out of its side, or call it a sexy motorcycle with the world’s weirdest sidecar…but whatever you call it, the Snaefell is a feat of amateur genius. Built by Francois Knorreck, the wonderfully unique vehicle took more than a decade, 10,000 man-hours and more than 15,000 Euros to construct. The body of the sidecar was all custom-built, and inside it looks like an actual sports car. The motorcycle portion is built on a Laverda triple 1000cc base, giving it power and grace. And it needs it when it’s hauling around a sidecar that’s as big as a commuter car. But taken together, the motorcycle and sidecar just seem to blend together like they were born attached at the hip, which is likely just what the amazing vehicle’s creator was going for. The literal sidecar was built from various pieces of a Citroen Xantia, a VW GTI and an Audi 80.