Social Media around the World 2012 (by InSites Consulting) 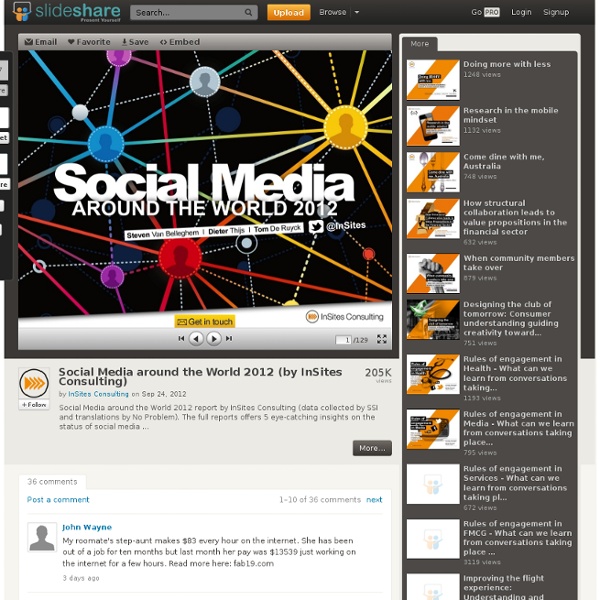 Why You Can’t Sell with Social Media (And 3 Things to Do Instead) Social media can give your company many different benefits. It can increase awareness and introduce you to new people. It can be used to help customer service, and follow-up with disgruntled customers. It can also be used to get the elusive, but effective word-of-mouth marketing. But it can’t sell. Market research giants Forrester Research and GSI Commerce looked at online retailer data in 2010. The results aren’t pretty. Less than 2% of all orders were from social networking shoppers. The most common objection to using social media is, “What’s the return-on-investment?”. So what’s the solution? How a Toy Maker Used Social Media to Increase Revenue by 300% The direct ROI of social media is usually dismal. But then again, so is almost every offline advertising method like TV, radio, print and billboards. They just aid indirectly, so it’s difficult to measure a direct conversion rate. Just like social media. Try telling toy maker Step2 that social media doesn’t drive sales. So who’s right? 1.

The Guide To Search: Why Social & Mobile Are The Future Search is currently in a transition period right now. As algorithms become more complex and the major search engines introduce new features, it's clear that our expectations about how search should work and what it can do for us has risen with every new development. It's not enough that it just suggests relevant information. Now we demand that it comes faster, becomes more accurate and matches our tastes and interests. Throw Siri and Google Now (or at least, the potential of Siri and Google Now) into the mix and the idea that the very concept of search will be radically different in three to five years time is a distinct possibility. Social search was seen as the next step in this process. Yet one thing is certain: With more and more content being created online, a new way of curating and processing the vast waves of information out there will necessity. Contents1) Where Is Social Search Headed? Where Is Social Search Headed? The Development Of Mobile Search Web & Mobile analytics tools

Scaling Up Social Media Burberry Group PLC has a rich heritage that would make many other companies envious. For more than 150 years, this luxury apparel company could credit its success to its instantly recognizable brand and timeless yet contemporary designs. But today a new defining element has come to the fore: branded digital and social media experiences. Just look at how dramatically Burberry has reimagined its fashion shows, once effectively off-limits to the brand’s many admirers. Today Burberry streams its shows to its fans on Facebook (12.8 million as of May 2012) and its audience on YouTube (13.3 million unique video views and about 35,000 subscribers to its channel as of May 2012). Partnering with Twitter, the company created the “Tweetwalk,” a real-time feed that showcases new designs just before they hit the runway. With these moves, Burberry has positioned itself on the leading edge of digital and social media. Creating a Social Experience 1. 2. 3. Reprint No. 00130

Why social media strategy should not start with a drive for Facebook fans Why does every social media strategy seemingly start with a company cajoling people to come “like” their Facebook page? This post will explain why that is usually a bad strategy if you are aiming at creating long-term, loyal customers. I’ve been honored to be selected to help judge a global company’s internal social media competition. Entries were submitted from all over the country as their locations put forward their best shots at social media gold. There were some interesting entries, even some very good ones, but they all had one thing in common. “Our goal is to enter the conversation with our customers and engage with them on our Facebook page.” Last week I wrote about how our relationships with brands develop over time through many small interactions that create awareness, affection, trust, and eventually a loyal relationship … similar to the way we create friendships in real life. If the true goal is customer connection, why does it have to start on your own Facebook page?

+500 Free PowerPoint Templates & Backgrounds for PresentationsSlideHunter.com Why Most Social Strategies Fail When I ask people what their social business strategy looks like, I usually get the following response, ”Oh yeah, we’re on Facebook.” The conversation continues apace: - Twitter account…check. - YouTube videos….yup. - People who seem to know what they doing with those accounts…kinda. - Metrics….Likes. But that isn’t a strategy – it’s a series of tactics. Having a Facebook page is like having a telephone — it’s a tool that needs a purpose. My colleague Brian Solis and I are in the midst of conducting research on what makes a good social business strategy and a key finding is that as companies evolve their social initiatives, the efforts get disconnected from business goals. This isn’t about waiting until companies have reached a stage of “maturity” before they are deemed to be successful. Here’s an example: one company we spoke with focuses most of their social efforts on developing their Facebook presence. So how can you tell if your social business strategy is successful or failing?

How agencies are reinventing the creative team in the social era | Central Desktop Blog | Smarter Collaboration Agencies Published on September 24th, 2012 | by Steve Hall Over the years, the integration versus unbundling debate has raged on within the advertising industry. Both specialization and integration have their benefits. How are agencies reconfiguring their teams to better function in the digital and social marketing era? We queried several agencies and asked them what they are doing and what they have changed to improve how they work in an increasingly interconnected but complex industry. One agency, Santa Monica-based DW+H, which recently hired crowdsourcing agency Victor & Spoils to rebrand and rename it, has created what it calls a “skunkworks operation” to handle unsolicited work for clients. DW+H Partner Lucas Donat tells us, “The teams are small, from 2 to 5 people, and what job titles they comprise are flexible; anything from an agency producer, copywriter, art director, or creative director to a social media strategist, intern, talent coordinator, or a receptionist.

Tour - Frequently asked Questions Organize, share and discuss all your information. A powerful editor to design your own intranet pages. Write rich text documents. Add discussions, custom forms, images, check lists, social media and much more. Create a knowledge base or internal wiki for your team. Designed from scratch: insanely easy to use, all you need to build a beautiful intranet. Easily share files. Add files to your pages. A complete archive for all your information. All your team's information in one place. Never lose information again. Find everything back in a second with powerful search. Structure it the way you want. Add quick access to important pages with a global menu bar. Add your own custom online forms with drag & drop. Easily design your own forms. Create your own forms and online database with drag & drop. Endless possibilities. Build forms to create your own simple database apps. Reports & Analytics Create reports of filled-out forms in a convenient view, e.g in a data table. Workflows. Advanced permissions.

7 Tips for Creating a Social Media Plan for Your Business Do you have social media plan? Are you looking for an easy to follow guide to formulate a plan for your business? Keep reading for seven tips to help your business develop a social plan… Why Businesses Fail With Social Media Businesses often fail in their social media efforts for the same reason New Year’s resolutions fail: It’s a good idea, but there’s no structure or commitment. Then, when there are no immediate results, or the goal ends up being more difficult to attain than previously thought, it goes by the wayside. Has this happened to your business’s social media presence? For the rest of us, we need something to keep us honest. These seven tips will help you design a social media plan that will keep you on track, active and moving forward. #1: Make a Commitment Before you even start creating your plan, you have to make a promise. To prevent that kind of slide, make a commitment. #2: Find Your Best Fit Search for your business on sites like Yelp. So do some searching. #7: Delegate Tasks

How to Use Foursquare to Market Your Business & Reach a New Audience 23 December '12, 05:00pm Follow When we think of social media and business, the first few things to come to mind are Facebook and Twitter. Yet, there is one mobile app that tends to get overlooked by businesses: Foursquare. True, it doesn’t have the same numbers that the likes of Facebook and Twitter can boast, but what it does have is a dedicated audience which has made over three billion check-ins. Regardless of whether you’re a retailer or not, any business can use Foursquare and getting yourself set up is easy. Why Foursquare? While it has a web presence, Foursquare has been growing quite steadily over the last few years, and offers some unique opportunities for businesses and brands. Foursquare’s main strength comes from its users, the power of personal recommendation and sharing on different social media sites. With over 40 million venues and one million businesses to check-in to, there’s a lot of potential to make Foursquare work for you.