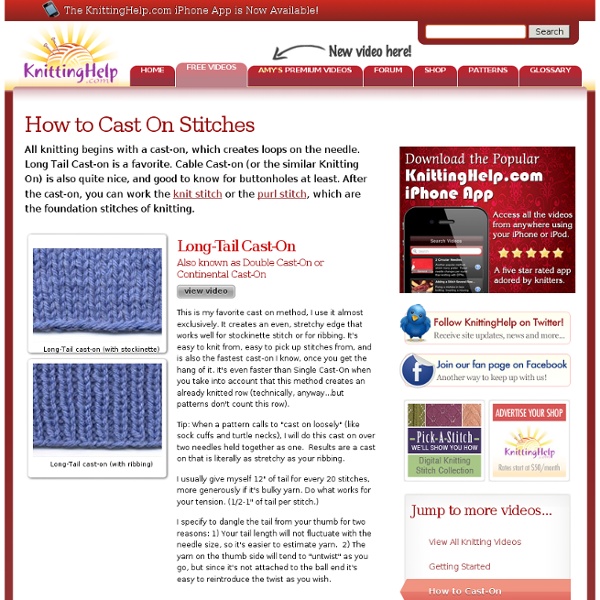 Also known as Double Cast-On or Continental Cast-On view video This is my favorite cast on method, I use it almost exclusively. Tip: When a pattern calls to "cast on loosely" (like sock cuffs and turtle necks), I will do this cast on over two needles held together as one. I usually give myself 12" of tail for every 20 stitches, more generously if it's bulky yarn. I specify to dangle the tail from your thumb for two reasons: 1) Your tail length will not fluctuate with the needle size, so it's easier to estimate yarn. 2) The yarn on the thumb side will tend to "untwist" as you go, but since it's not attached to the ball end it's easy to reintroduce the twist as you wish. Alternative Method There is another method of working longtail cast-on, which is a slower to work, called the thumb method. Related:  Tricot

Simple Pleasures Hat For this hat, I wanted to use the most luxurious fibers I could get my hands on and to let the yarn speak for itself by keeping the shape casual and the design simple. Jade Sapphire's 2 Ply Cashmere Silk answered the call. Doubled for the cuff and combined with a laceweight mohair (Rowan's Kid Silk Haze or Alchemy's Haiku) for the crown, the Cashmere Silk is one of Purl's gems. It is unbelievably soft and supple; it's beautifully hand dyed; its materials are of unparalleled quality; and it's surprisingly affordable. Whenever I knit with it, I spend as much time admiring what I've knit as I do actually knitting! If you've never knit a hat before, this is a wonderful place to start. To get started, please visit keep on reading. Updated: A New Simple Pleasures Hat To make the version of this hat posted on August 30, 2012, you will need the following materials. The (Updated) Materials The (Updated) Gauge Original Simple Pleasures Hat: The Materials The Pattern Gauge Finished Size Note Cuff Crown

How To Make A Crochet Magic Ring There is definitely a benefit to using a magic ring, or magic circle, over the traditional beginning chain that you slip stitch into a ring. What is it? There will be no space in the center of your project. It will completely “seal” and leave no hole. Here are the steps to making the magic ring. It may take some practice, so don’t give up! Step 1: Begin by making a backwards “J” with the end of your yarn. Step 2: Cross end of yarn behind your yarn coming from the skein. Step 3: At this point you will need to pinch/hold the yarn together where they cross. Step 4: Let yarn from skein fall behind loop. Step 5: Pull loop all the way through, and up to top of ring. Step 6: Using your middle finger (or any finger that is comfortable) continue to hold the loop you just made, to the top of the ring. Step 7: Chain 1 for sc & hdc patterns. Step 8: Crochet as many stitches in the ring as your pattern calls for. Step 9: Pull yarn end to seal circle. Happy Crocheting!

Knitting at Knoon Designs - Provisional Cast-on Play Video A provisional cast-on is usually worked in a contrasting waste yarn so the cast-on stitches can be easily removed later. The live stitches are then recovered so you can knit down from that point without the joining line you'd have if you picked up stitches along the edge. There are several provisional cast-ons; this is the one I like the best, because I find it to be the easiest to work. You'll need a crochet hook in an appropriate size for your working yarn and needles, and a length of waste yarn. Start by making a slip knot loop on the crochet hook. Bring the crochet hook in front of the needle and pick up the yarn. Take the yarn back behind the needle and repeat this process until you have the desired number of stitches cast on. Break the yarn and pull a large loop through the last loop on the crochet hook. When you are ready to recapture the live stitches at the cast on edge, gently pull out the chain, placing each stitch on a needle.

How to Knit a Blanket How to Knit a Blanket I used to think that a blanket was a lot of knitting. But it’s not necessarily that much more knitting than a scarf, and the finishing is easy, unlike a sweater. A blanket is not a bad knitting project for any level of knitter. You can choose to knit an elaborate king size blanket, or a simple garter stitch rectangle for a doll. It’s also a good project for kids learning to knit who want to make something, but who don’t want to make a washcloth or a scarf. I think a knitted blanket was my very first project, even if I didn’t plan it that way; I was six years old, and my knitting tension went from very very loose on the first few rows, to very very tight on the last. There are a lot of lovely knitting patterns for blankets out there. But you don’t need a pattern to start a blanket. Recipe 1: a simple garter stitch blanket Step 1: Calculate your knitting gauge in stitches per inch. Step 2: Decide on the width of blanket you want to knit. Step 2: 100 ÷ 6 = 16.66… Comments

seamless + symmetrical | november :: mystery crochet project Hooks at the ready! Let's get started with this month's mystery crochet project. To make this project all you need to know how to do is to make a basic granny square. With 43 comments Wool-Eater CAL 2012 Effective, textured, an absolute show-stopper the Wool-Eater has become a favourite among many! With 225 comments Wool-Eater Motif CAL 2013 In 2012 we hooked a square or oblong Wool-Eater . . . 2013, and I thought it would be nice to hook a Wool-Eater Motif Blanket! With 78 comments Crochet Cast-On The Crochet Cast-On or Crochet Edge Cast-On makes an edge that matches the standard bind-off. This cast-on can also be used as a provisional cast-on using a separate piece of yarn. It has the advantage of not needing to pick up stitches in the chain. With care it can be done using two knitting needles. It can also be done with a larger needle if a looser cast-on is needed. The stitches are formed around the knitting needle using the crochet hook. Use one knitting needle and one crochet hook of equivalent sizes.Make a slip stitch and place it on the crochet hook. Hold the crochet hook to the right of the knitting needle with the working yarn (the end coming from the ball) behind the needle. Bring the crochet hook in front of the knitting needle, under the yarn, and grab the yarn with the hook. Pull yarn through the loop on crochet hook and slip that first loop off the hook, leaving the new loop on the crochet hook. Continue until you have one less stitch around the needle than you want.

Hermione's Cable & Eyelet Hat The original Hermione hat, from a publicity still released recently: Here is my interpretation of Hermione's hat in the upcoming Harry Potter film, Harry Potter and the Half-Blood Prince: I think I've come very close, but would like to make a couple of mentions before I introduce the pattern. First, I apparently can't count past 3, so my sample has a couple of errors. The pattern is, I hope, correct. Next, the hat, as pictured, does fit me, but not very well. I should add that despite the hat not quite fitting me right, I do have a large noggin. lol. If you want to make the hat larger around, you'll need to do one of two things. Materials: 1 Skein Patons Classic Merino in the colorway Grey Mix (I used probably a little over half a skein, but people on Ravelry are reporting that they've used closer to a full skein) Size US5 (3.75mm) 16" circular needles Size US5 (3.75mm) double-pointed needles Gauge: 7 stitches and 9 rows per inch Directions: Cast-on 110 using the Alternate Cable Cast-On.

Working Joined Rounds with Single Crochet | There are a couple of ways (known to me) of crocheting in rounds without turning your work. You can work in spiral rounds, where you do not join rounds but simply start each following round from the top of the first stitch of the round below. Alternatively, you can work in joined rounds, whereby the beginning of each round is raised with a chain, so the last stitch of the round ends up at the same level as the first stitch at the start of the round. The end of the round is joined to the start of the round with a slip stitch. The latter approach is what this tutorial is about. I have come across a few methods of working joined rounds with single crochet and, if you are working from a pattern, it will generally state which method is to be used. To illustrate these methods, I have made a chain of 20 stitches, joined it in a circle and then worked up a tube in single crochet stitches. Method 1: JOINING TO THE RAISING CHAIN Here is what my tube looks like after I have completed a few rounds:

Malabrigo weave scarf This one was a long time coming. Some Malabrigo goodness for me. This sat in my office knitting basket for quite a long time, progressing slowly as I stole a few furtive stitches here and there during lunch break. I became quite proficient at cabling without a cable needle on this one. I took the pattern out of one of my stitch dictionaries. Malabrigo Weave Scarf Yarn: 4-5 skeins of Malabrigo Worsted, seen here in Grey Pearl (I used 5 skeins, because I wanted an extra long scarf, but 4 would be more than enough for an average length scarf.)Needles: 6 mm, or whatever size gives you a pleasing fabric. Cables:4CF: put next 2 stitches on cable needle, bring to front, knit next 2 stitches, then knit 2 stitches from cable needle4CB: put next 2 stitches on cable needle, bring to back, knit next 2 stitches, then knit 2 stitches from cable needle Instructions:Cast-on 46 stitches (or a multiple of 4+2) Keep going till you get the desired length. More info on the pattern can be found here on Ravelry.