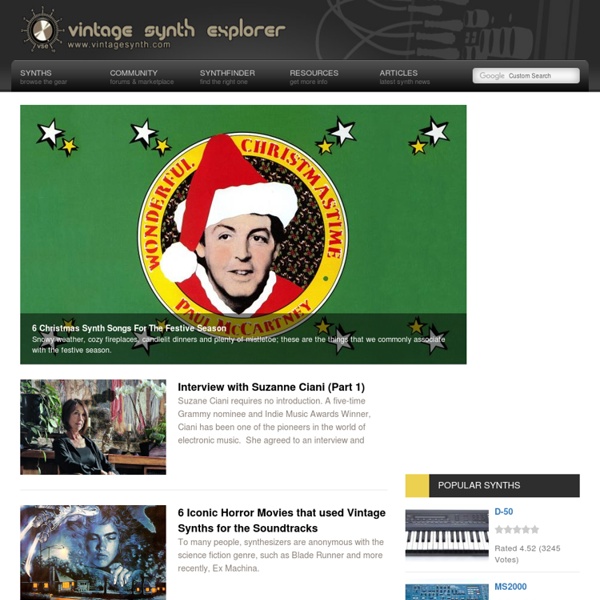 Since 1996, the Vintage Synth Explorer has been a leading online resource for vintage synthesizers, digital synthesizers, software synthesizers, and other forms of electronic musical instruments. Detailed descriptions and reviews, pictures, audio and video demos, technical specifications, lists of famous users, links, and much more provide the ultimate way to learn about these instruments. Use the "SYNTHS" menu above to explore our library of over 750 synths, samplers and drum machines! Radikal Technologies Spectralis Jan 21, 2014 The Spectralis is a professional synthesizer, groovebox, and sequencer created in 2004 by Radikal Technologies.

If You Use IE6, Chances Are, You Are Not An Einstein Science agrees: geeks use other web browsers. By collecting data from more than 100,000 users, a research firm has revealed that the majority of Internet Explorer users tend to have a lower IQ than Firefox, Google Chrome, Safari, Opera or Camino users. No one cares about the EQ anyway. However, if you use the Internet Explorer with Google Chrome frame, there is a hope for you too. Still confused? Pittsburgh Modular - News - Announcing an avalanche of new Pittsburgh Modular products Pittsburgh Modular is announcing an avalanche of new products. Two complete synthesizer product lines and a pair of desktop eurorack case and power supplies. The Cell[48] Modular Synthesizer System The Cell[48] Modular Synthesizer System is an expandable, eurorack, small format modular broken into three separate systems.

Most Dangerous Dogs in the World. Credit: Mandee Sears (via Flickr) Note: This post was originally published on April 1, 2009. It has since been updated with a new introduction and further background on the history of dangerous dogs. What is it? MeeBlip is a line of playable musical instrument hardware from CDM (createdigitalmusic.com) and Blipsonic engineer James Grahame. We build ready-to-play, friendly, fully open source hardware for anyone. anode is the latest in our award-winning MeeBlip synth line. Combining an analog filter with unique digital sound sources, all in an easy-to-understand, compact sound package, it’s synth hardware anyone can enjoy immediately. The all-new MeeBlip anode is part analog, part digital, capable of producing a range of uniquely aggressive, bass-heavy sounds. And inspired by the best classic synths of the past, getting your hands on that sound is always simple, direct, and intuitive.

Best Music Gear of 2013: Top 10 Plug-Ins 2013 has been a massive year for new & innovative music software releases. Native Instruments released the latest and greatest version of Komplete — and if you’re looking to complete your studio with effects and instruments, you won’t get better than that! But, there are other individual effect and instrument plug-ins that really stood out for us here at AskAudioMag.com... And here are 10 of the best plug-ins that passed by our review labs this year (in no order). If you have other plug-ins you feel deserve to be in this list, let us know in the comments below, or on our FaceBook page. WaveDNA Liquid Rhythm

10 Best Internet Browsers - Honeytech Blog 10 Best Internet Browsers Your Internet browser is the key the World Wide Web. It is basically a must have application on your computer. Fisher SC300 Vintage Keyboard Boombox Featured listings: more... This Blog Saturday, December 01, 2012 Fisher SC300 Vintage Keyboard Boombox via this auction Moog Minimoog Historically, the Minimoog is considered the very first synthesizer for musicians! Compact, affordable, simplified and based on the megalithic modular Moog synths, the Minimoog became the most popular synth of all time, and still is to this day! Prior to the Minimoog, synthesizers were custom built to order, and required a great deal of technical knowledge to be able to wire up and create a sound. The Minimoog changed all that by hard-wiring the most basic but essential of components into a compact keyboard any musician could not only play, but dial up some great sounds on! Thus, the Minimoog was the first synthesizer to show up on the shelves of music stores around the world.

Funny photo mixtures of pets and famous people Yoda and Audrey Hepburn When pets and celebrities meet this is what you’ll get a Dr. Spock corgi, a Michael Jackson chihuahua, an Amy Winehouse kitten, and so on. These are all funny photo montages of dogs and cats that are turned into famous people. Similar thing has been done to these photoshopped animal photos where frogs look like strawberries and spiders like onion. Mother Teresa and Dame Edna Everage Techland - Tech and Gaming News and Reviews - TIME.com Regulators are wary of facial recognition software Facebook rolled out a new photo-sharing app in the U.S. this week, but it won’t come out in Europe in the near future due to concerns over how it uses facial recognition technology. The app, called Moments, allows users to share photos with each other privately based around specific events and uses facial recognition software to detect which friends are in a given photo. The technology, which is used to offer photo tagging suggestions on Facebook proper, is automatically set to be used on all users in the U.S.